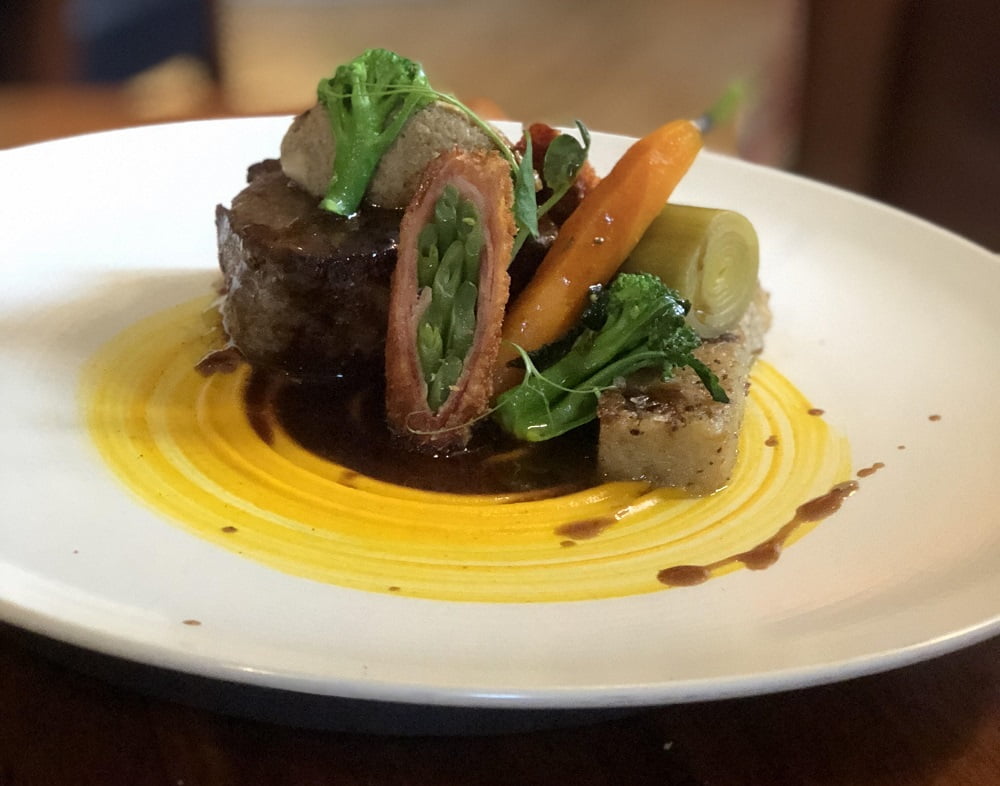 Working weekends over the summer months really sucks, especially as it’s when all of the best food festivals and events are going on. That being said when a rare opportunity arises as it did last weekend to spend two whole days together, Mr R and I do our very best to make the most of it and squeeze in as much food and drink as possible. Great news for my Instagram grid, not such great news for my waistline. It’s less than 3 weeks until our wedding as I’m writing this and I’m wondering how on earth I’m going to squeeze into my dress after what we managed to get through over the past couple of days. This little trip was a bit different to usual for us as this time we decided to take the dog with us. We’d normally leave her with my parents when we go away in fear of being limited in what we do and where we eat. When we last stayed in Broadway at The Lygon Arms back in April, we regretted not taking Holly with us as the hotel and village were so dog friendly. Despite only being a few miles from home we had such a good time that we decided to go back to Broadway for a two night retreat at The Fish Hotel. 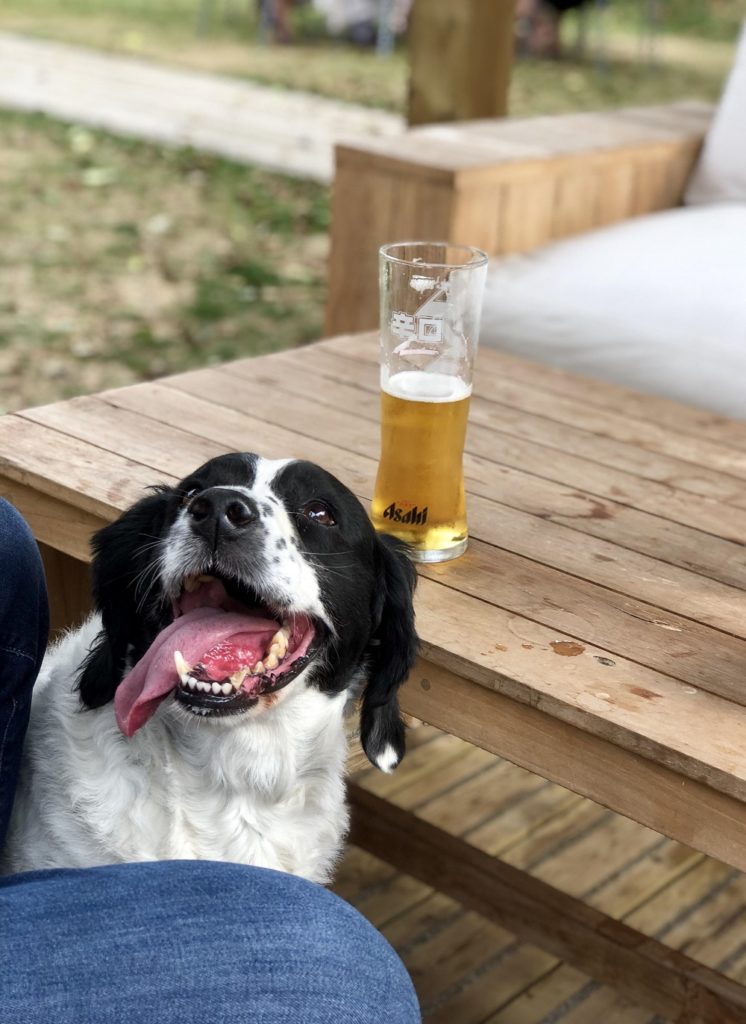 The Fish Hotel is one of three luxury hotels located on the Farncombe Estate in the glorious Cotswolds. The Fish had been on our bucket list for a while, and after discovering that the new Hook restaurant by Martin Burge had opened in March whilst doing some research on new Worcestershire restaurants to try in 2018, we were even more keen to go and check it out. Being so close to home this would be a great experiment to see how the pooch coped with her first full weekend away. The hotel is spread out around the estate and the rooms are a combination of luxury hideaway huts, tree houses and farmhouse rooms. Our bedroom ‘Barnsley Willis’ (£300 per night) was one of the big suites in the Stables which allowed us plenty of space for the three of us to relax. We were able to park right next to our room which had a porch entrance and logs stacked up for the wood burner inside. The room was spacious and just a short walk from The Lodge which is where we headed to for some drinks on the deck before our 7 pm dinner in the bar.

We didn’t enter the Hook restaurant as it was the only part of the hotel that understandably didn’t welcome dogs, but we were very comfortable in the bar area and Holly was given some treats by one of our servers which seemed to keep her happy whilst we enjoyed our dinner. There appeared to be some staff training going on and a few issues that were still to be ironed out. I could see the glass of Prosecco I’d ordered sitting on the bar for 10 minutes after Mr R’s Martini cocktail had arrived, but mine had been forgotten. Our wine ended up arriving at the same time, which was no big deal, but the idea was to have an aperitif whilst enjoying our bread and starters. The crusty sourdough bread and seaweed butter (£1.50) was followed quickly with our starters of salmon tartare, wasabi ice cream (£9) and the smoked haddock scotch egg, saffron tartare (£8.50). Both were very ample portions for a starter and were reasonably priced considering we were in a hotel catchment.

I’d had my heart set on the Fowey mussels with white wine & parsley which you could choose as a starter (£10) or as a main course with fries (£16), and with an alternative option to be cooked with smoked bacon & cider. This was the largest bowl of mussels I’d ever seen and after the large smoked haddock scotch egg I knew I was going to struggle with this. Mr R opted for the Lamb chump, citrus bulgur wheat, broad bean, anchovy (£22). The meat was cooked pink to his liking and was a great tasting dish. He helped me out by finishing my mussels and fries, before we moved on to the chocolate fondant dessert which wasn’t on the menu, but we were told by our server was available. The fondant was good and came with a scoop of vanilla ice cream. It was a simple but enjoyable pudding. We got another bottle of wine ordered and retired to the games room next door for a few rounds of pool (I won), and then sat outside on the deck for a while and chatted to other guests.

Lazy mornings aren’t something we get to enjoy very often and we woke up early due to the heat in the room. The carpets, cosy furniture and great insulation would make this the perfect room in the winter, especially with the log burner fired up. It was close to 30 degrees outside so without air conditioning or a fan it did feel a bit stuffy. As we were awake anyway we took Holly and went back to the bar for an early breakfast. The choice on offer was fantastic with a selection of cold meats, cheeses, cereals, pastries, juices, fruit and more on the continental buffet table. On the pass in the Hook restaurant the chefs were cooking eggs made fresh to order and guests could help themselves to a full English breakfast. We had both.

Back in the room we felt like relaxing for a few hours so I ran a bath, fully enjoying the fact that it was the weekend and I wasn’t at work. We didn’t have the right footwear for the 2 mile stroll in to Broadway and it was a good job we didn’t as later that day the weather took a turn for the worse with a hail storm and torrential rain. We took the car and browsed the shops. It was only 3 months since our last visit to Broadway and as we had the dog it wasn’t the day for a shopping spree, so we headed to one of our favourite lunch spots in the village at Number 32.

Our last visit to this little cafe really was the perfect lunch date, and we were pleased when we turned up this time to discover that they were also dog friendly. More snacks for Holly! We sat inside and were given a specials menu along with the main menu. I was immediately drawn to the loaded sweet potato fries (£7) and we couldn’t resist trying another pizza. The fries came with large cubes of halloumi, chorizo, bacon, jalapenos, melted mozzarella and hot sauce. They were delicious! We went with the garlic and rosemary oil based pizza (The Blanco), topped with grilled chicken, caramalised onion, mascarpone, mozzarella and mushrooms (£12). The base was just so thin and light, these pizzas are all about the toppings. Maybe next time we visit Broadway we’ll visit somewhere else for lunch, but then again maybe we’ll just go back to Number 32 as the food is just spot on. Before heading back to the hotel we tried to get a drink in The Lygon Arms courtyard, but unfortunately we couldn’t seem to attract any service, even though after going to the bar they said someone would come out to us. It was a Saturday afternoon so they were probably just very busy.

It was too wet outside by now for a walk so we went back up to the bar and relaxed for a while with a couple of cocktails and talked to some of the other guests. On that note, I don’t think we’ve ever been somewhere where we’ve met so many friendly people. Maybe this was because we had the dog with us? The hotel had ordered a taxi for us which was also dog friendly, and the driver took us back into Broadway where we stopped for a quick drink in The Swan, before heading over to Russell’s of Broadway for our 6:30 pm dinner reservation. This would be my fourth or fifth time eating at Russell’s now since Mr R first took me there in January 2017. This is one of the few restaurants in Worcestershire listed in the Michelin Guide and is very popular with both tourists and the locals.

A prix fixe menu is available for lunch and dinner (Mon-Sat) and is great value with 3 courses costing just £24 at lunch and £27 at dinner. You can also enjoy a free glass of Prosecco on arrival to add to your 3 course lunch or dinner with the Worcestershire Foodie Card. We started with a glass of Prosecco each before both choosing the hand dived scallops to start from the al a carte menu (£12). The scallops were accompanied with a vanilla & cauliflower puree, devil on horseback, toasted seed and Gremolata dressing. The dish was a tremendous start to our meal as were the warm fresh homemade rolls, salted butter, beetroot butter & tapenade that came with them.

Restaurant manager Tom had taken our order and helped me decide between the cod and the sole. I chose the sole (£24). The poached fish fillet came with grapes, confit fennel, creamed mash potato, salmon roe, white wine sauce and was a surprisingly rich and filling dish for such a delicate fish. The presentation and cooking were exceptional as per every previous visit to Russell’s. I persuaded Mr R to go with the fillet (£32) over the rump steak based on how delicious the accompanying mushroom duxelle, braised leek, potato & leek rosti, crispy parma ham wrapped green beans with thyme jus sounded. He actually thanked me for it after taking his first bite into the meat. If you ever wondered what people are talking about when they describe a piece of meat melting in your mouth like butter, then this is it.

Our taxi to return to the hotel had been booked at 9:30 pm and we still had an hour left after finishing our mains, so sat for a short while and enjoyed the wine, before going in for another course. We shared a refreshing selection of homemade sorbets with poached exotic fruit (£7), followed by three seasonal cheeses (£8), and somehow it was now suddenly 9:20 pm. It was one of those evenings that we were enjoying so much and could have easily stayed there for another hour or so. Before jumping into the taxi we ordered a large after dinner drink and a short while later found ourselves back in the bar at the hotel.

In the morning I skipped breakfast in favour of a bath and we still had one more stop on the way home for lunch at The Ivy Inn in North Littleton just outside of Evesham. I was also feeling a little delicate following the very large brandy and unknown quantities of red wine from the night before. Driving away from The Fish along the 2 mile road out of the Farncombe Estate it seemed as if we had spent the past couple of days in a place that must have been miles away from home. It just goes to show that you don’t have to get on a plane or travel for hours to enjoy a luxurious and relaxing escape.