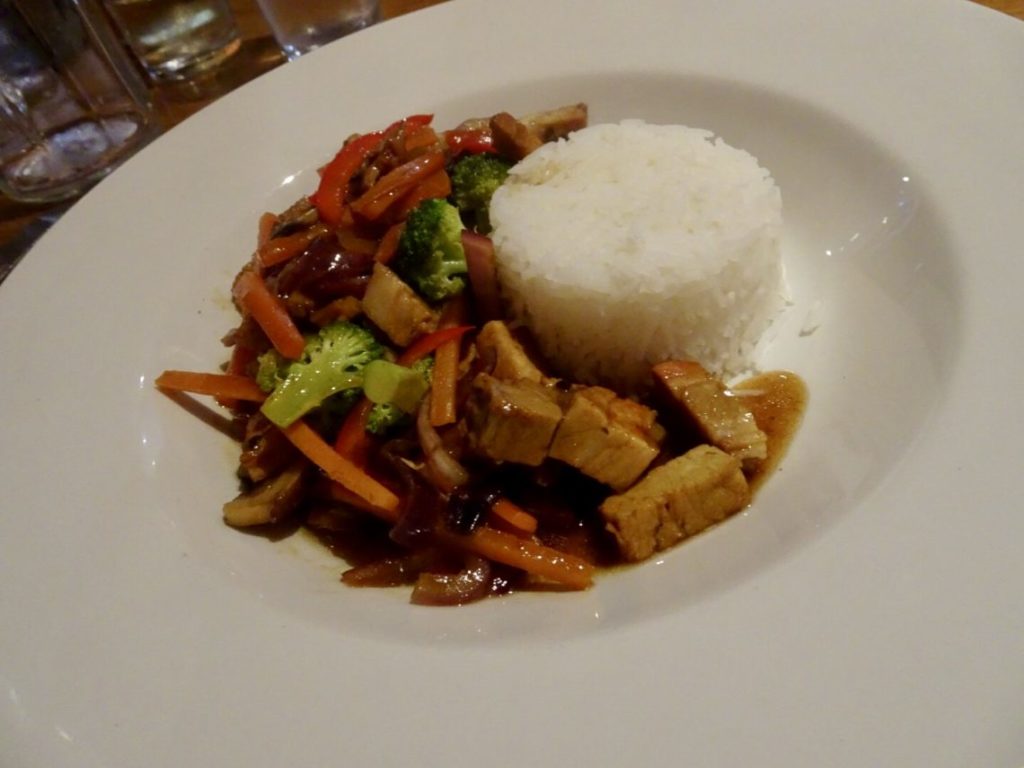 The Bell at Eckington

The Bell is a country pub located in the rural village of Eckington situated on the outskirts of Worcestershire. It also offers bed & breakfast with four en-suite bedrooms available for its guests. There appears to be little information obtainable online regarding the history of the pub, however according to The Bell’s website it is currently owned by Steve and Kerry Leighfield. Reading through past reviews it appeared that the restaurant struggled for some time to gain support from its customers. However in 2015 the efforts of the family run pub to try and turn things around paid off and they were awarded a Certificate of Excellence from Trip Advisor in 2015.

It had been a few years since my last visit, until an opportunity arose to go back to The Bell when we found ourselves looking for somewhere to meet guests visiting from overseas who were staying nearby. Being the third local eatery that I rang late on Monday and the only one to answer the phone, I asked if they could book our table of 6 for the following evening. I wasn’t sure what time exactly we would be able to get there, but the lady who answered my call said this wouldn’t be a problem at all and was happy to be flexible about our arrival.

We got to Eckington on Tuesday evening a little later than expected. Despite our late arrival we were greeted with a warm welcome from the lady behind the bar, who I’d assumed to be the establishment’s landlady, Kerry. The bar and restaurant décor was modern with contemporary art on the walls, whilst still keeping a traditional country pub feel with its real Ale at the bar, an open log fire and oak furniture throughout. There is also an outside seating area and garden which looked very inviting as the weather was glorious.

A waiter collected us from the bar, pointing out the blackboard which listed the specials, on the way to our table. Once seated, we questioned him about what was good from the wine list and helped us choose a bottle of red and some white. We’d remembered from our visit a few years back that you could cook your own steak on a hot volcanic rock which they presented at the table, called ‘stone cooking’. This must have been popular for them as it was still featured on the menu.

After a good read of both menus, 2 of us ordered the grilled chicken tikka from the main menu to start, whilst the others opted for the asparagus, the smoked salmon and crayfish salad; and the asparagus soup from the specials. The chicken tikka was a great choice for Mr R and I who both agreed that the marinade was really tasty and the meat was succulent and juicy. The asparagus unfortunately was overcooked, but the soup and fish starters were also both really good and well received.

Torn between the burger and the fish pie, I eventually decided on the latter. There were 2 orders of the pork stir fry from the specials board, as well as the blade of beef and the chicken stuffed with goats cheese. My Dad went for the parmesan chicken from the main menu which I hadn’t spotted but sounded good. I tried Mr R’s pork stir fry, it was light and healthy, the vegetables al dente and the pork tender. There was a slight issue with the blade of beef which we did raise with the waiter this time. It was served in a bowl full of gravy and the dauphinoise potatoes were subsequently soaked in sauce. We asked for it to be re-served on to a plate rather than a bowl with some fresh potatoes and far less gravy. When the meal was quickly bought back it looked much better and was very much enjoyed. My fish pie was fantastic. I loved the buttery, crunchy topping and the pie was filled with a generous helping of fish and a delicious creamy, but not too creamy, sauce.

The portions were more than ample so sadly on this occasion there was no room for dessert, although there were certainly a few to be tempted by. We did order more wine though so stayed and chatted for a while. In the meantime, a family who were sitting by the window were ‘stone cooking’ their meat which filled the restaurant air with smoke as they grilled. We considered that the experience might be more fun if dining outdoors. Alternatively extractor fans and open windows would certainly help to fully enjoy the cook-your-own dining option inside.

In summary the food was great quality with table service to match. There was a good selection of food and wine choices on offer, and with the specials board too there was something for everyone. The pub and restaurant were comfortable and welcoming; the staff friendly and attentive and the price both reasonable and fair. I’d like to go back and try ‘The Bell burger’ for sure!