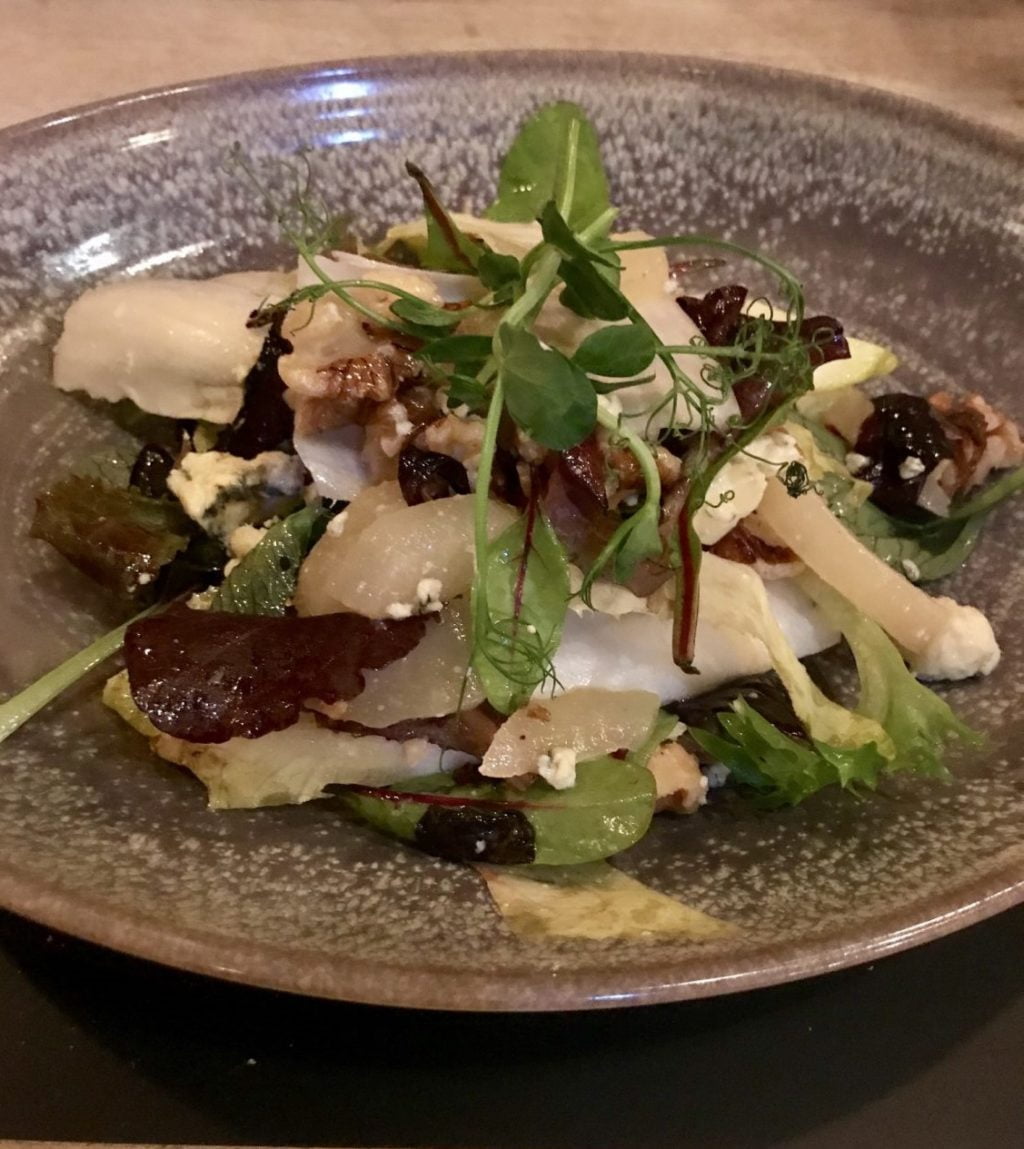 We visited The Jockey Inn, Baughton on behalf of WR Magazine,to review the restaurant. Flip to pages 54-55 on the online version of the magazine to view here.

Here’s what we thought…

My memories of walking through the doors of The Jockey Inn for the first time (on the launch evening 2 years ago), were reminiscent of a horsey childhood. Saddles hang from the walls either side of the entrance, as if entering a tack room. As you venture further inside there is a very distinct theme throughout, paying honour to both the horse and the jockey.

Prior to reopening in February 2015, the village inn located on the Worcestershire / Gloucestershire border, was closed for business during a 3 year refurbishment. It had been taken on by its new owner, Rebekah Seddon-Wickens, who bought the building with her father. The huge £1m makeover saw an incredible transformation, and within just 18 months after opening became a local success story. As well as being popular with locals (it was almost impossible to book a table more than a few weeks in advance), The Jockey were awarded the title of ‘Regional winner’ for the Midlands in the Good Food Guide Local Restaurant of the Year Awards 2017.

We’ve eaten in the restaurant many times, but most recently returned to The Jockey for a Friday night supper. I called ahead just half an hour prior to booking our table for 6:30pm on the same evening, and the friendly staff were able to accommodate us. On arrival we headed straight for the bar, where I ordered my favourite pre-dinner drink from The Jockey’s cocktail menu, a rhubarb fizz (Rhubarb and vanilla liqueur topped with Chilled Champagne). At £9.95 per glass, I only treated myself to one of these to sip on before being seated at the table and ordering our wine there. 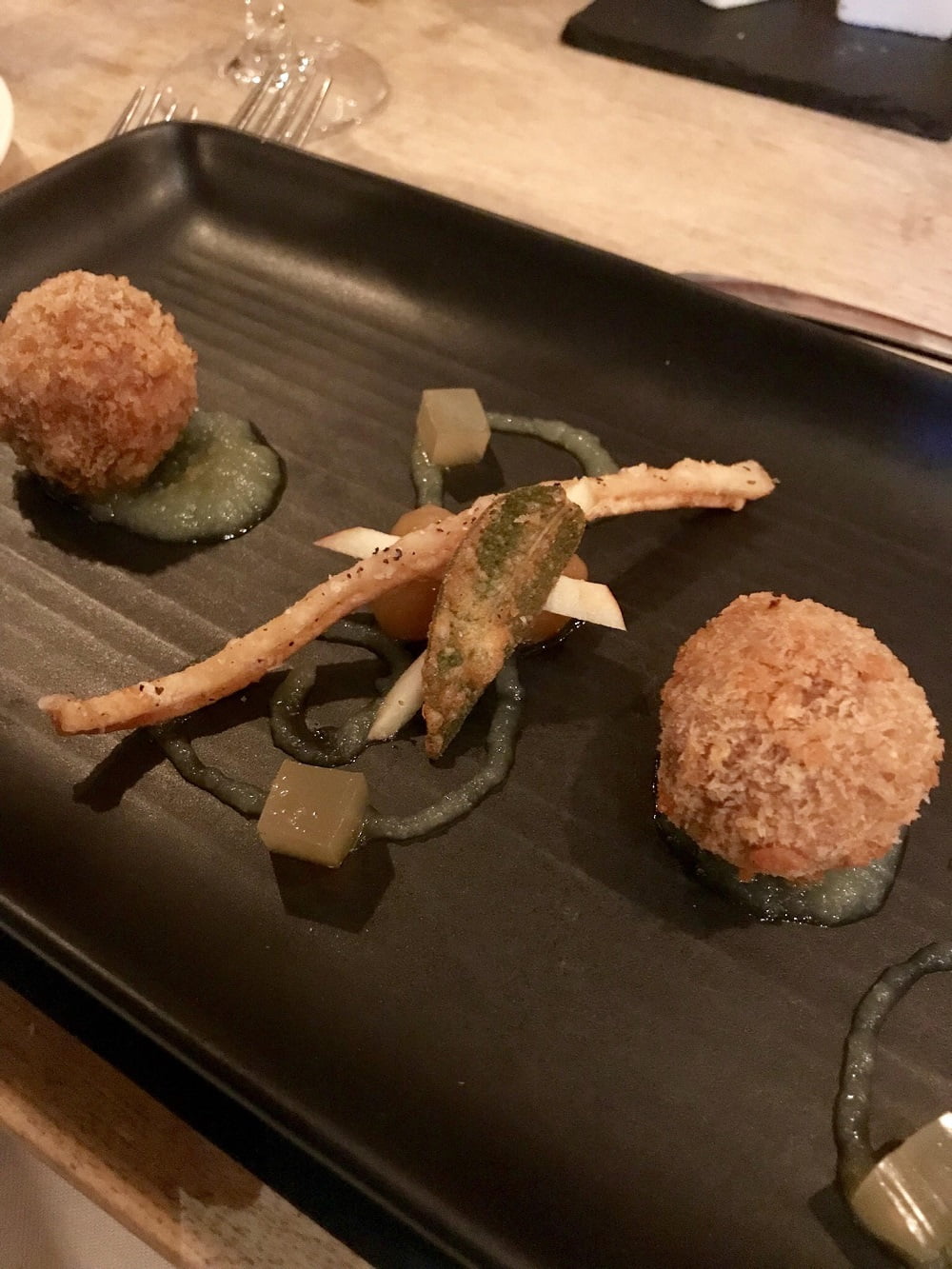 The menu is modern British with a few of the pub classics such as a chicken, mushroom & tarragon pie, traditional fish & chips and a house favourite (and usually my choice), ‘The Jockey Burger’. Main courses are fairly priced and range from £13.25 up to £24.95 for the fillet steak. My only qualm with the menu being as I’ve been a few times, is that wasn’t anything new, and without a specials board, I found the menu a little limited. Having said that, for someone who hasn’t visited as many times as I have the choice would be good. 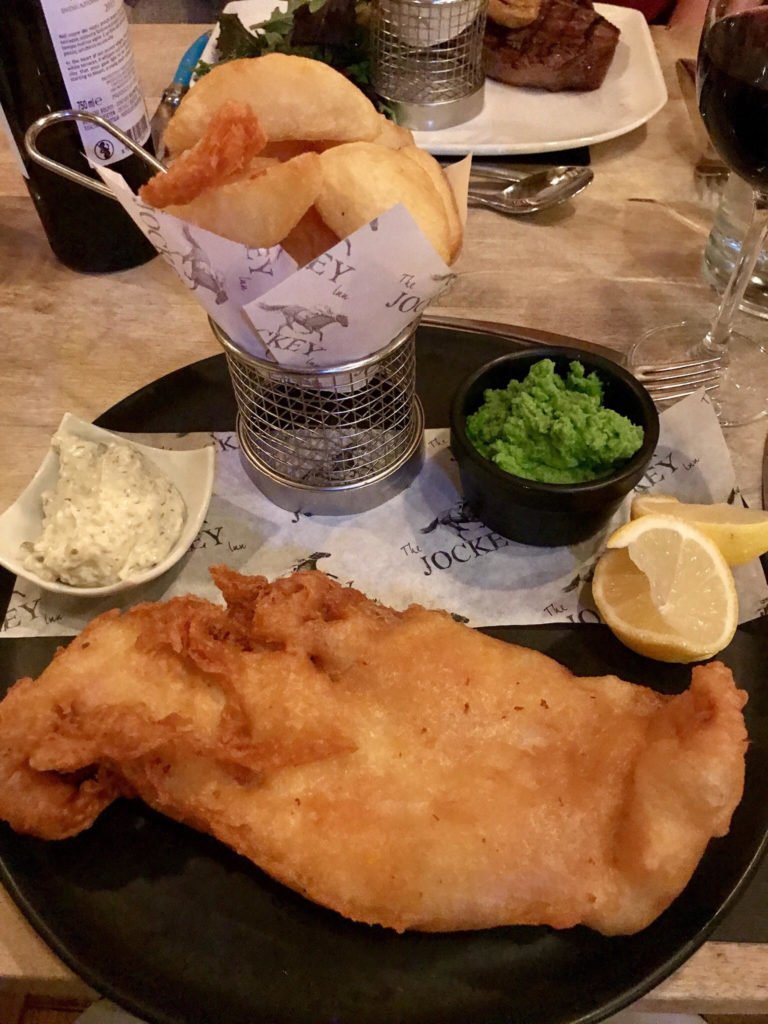 After munching through the homemade onion and olive bread with black olive tapenade I opted to start with the poached pear & blue cheese salad. A simple and light choice to freshen the palette and awaken my appetite. Across the table a plate decorated with apple puree, cider jelly and crispy crackling with balls of warm braised pork were also a delicious start to the meal. 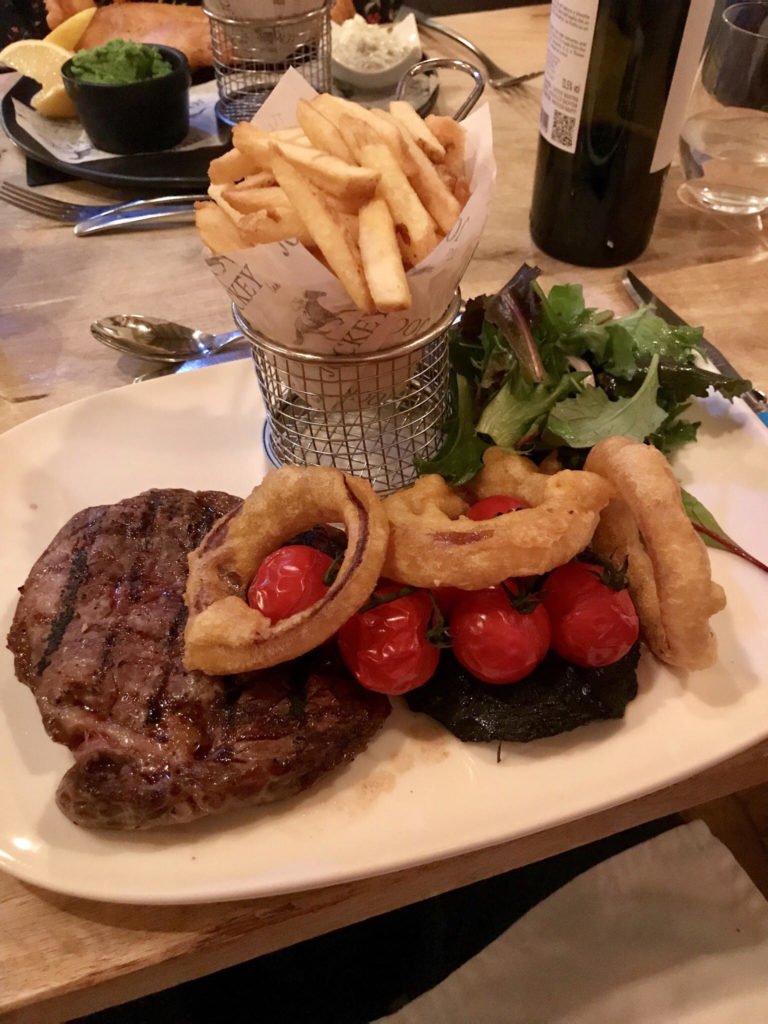 My main of fish & chips came with a pot of vibrant, green mushy peas and a homemade tartare sauce. The cod fillet inside the batter was a quality piece of fish; both fresh and succulent. Despite being so full from the very generous portion size, I cleared almost all of my plate since it was one of the best fish & chips I’d ever had. The rare 10oz rib eye steak ordered by my dining partner had been cooked to perfection. The meat blushing pink in the middle and had been seared, leaving a wonderfully charred, smoky taste to the outside. There’s much temptation on the pudding menu, but in the end we couldn’t resist being really naughty and ordering the ‘seven deadly sins’; a sharing platter with 7 of The Jockey’s best loved desserts. Each one equally as good as the other, except I did have a favourite in the treacle tart. 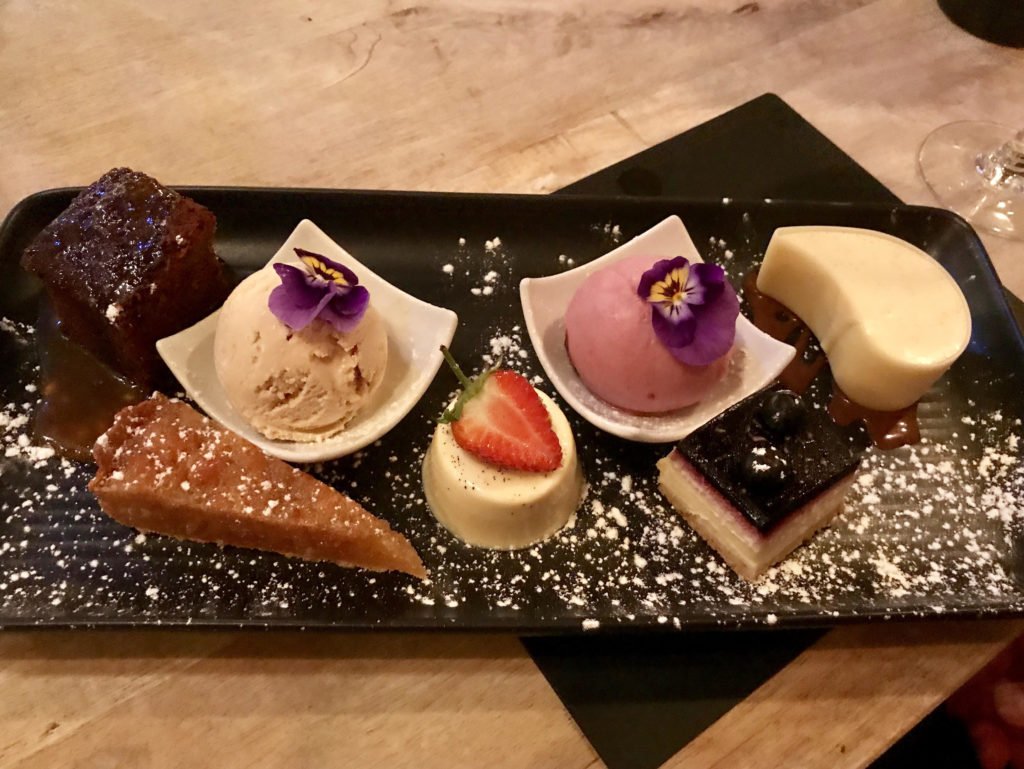 There’s always a risk when a pub undergoes a change that it could lose its loyal fan base, but The Jockey Inn has worked well to keep its local drinking customers on board, as well as bringing new diners in from all over the country. Their hard work continues to pay off with their most recent recognition being in the form of a local gem entry in the Good Food Guide 2018. 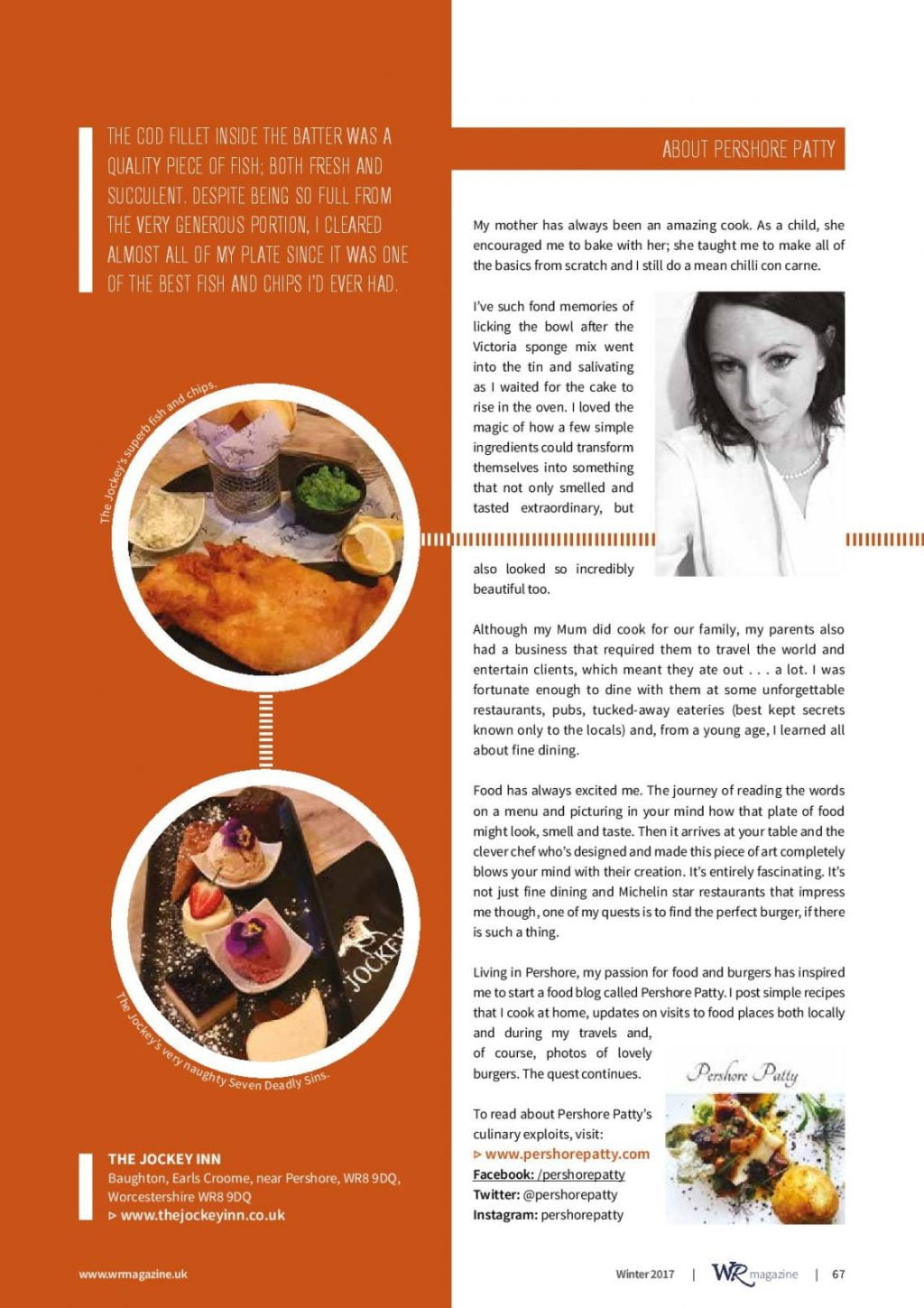