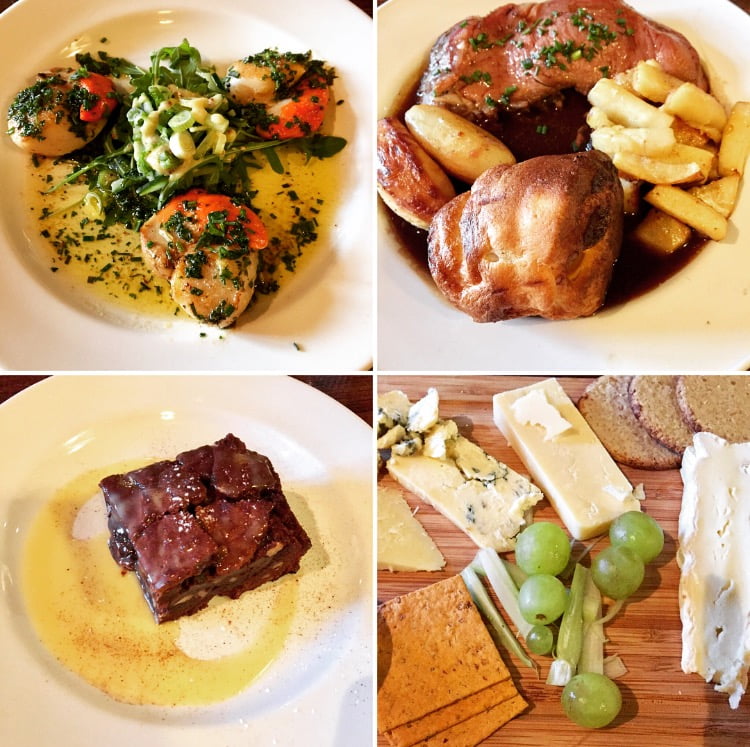 I took my Mum to The Bell Inn in December just after I’d heard that it had been taken over by new owners. We had been told by some friends who had been a few times and said that the fish was excellent, some of the best scallops they’d ever had in fact! Mum and I went for Sunday lunch to see if the food lived up to this exceptional standard we’d been expecting – it did.

After having such a good lunch with my Mum, which was not only really well cooked but great value, I couldn’t wait to go back. I’d mentioned The Bell a few times to my boyfriend and we’d loosely thought about going one evening to sample some of the fish dishes. We hadn’t quite got around to it yet so I suggested that we go together for Sunday lunch as we had a free day. Hopeful that it was going to be as good as my previous visit as I’d really bigged it up, my boyfriend booked us a table for a late lunch.

We arrived at 3pm, the restaurant was fairly quiet as you might expect for that time of day. I think there were only 3 tables occupied including ours, we sat next to the lit open fire. Jane (one of the owners) served us and took our order. We both had the scallops to start followed by the roast beef (medium for me and rare for him). The scallops we’re  presented beautifully and we had high hopes following our friends comments. They were cooked to perfection, large, meaty and fresh – absolutely stunning. Even the salad garnish on the plate had some thought given to it, clearly the chef really cared about what’s he was doing.

When our roast beef arrived, the meat had been cooked to our individual requirements. It was accompanied by roast potatoes, parsnips, a Yorkshire pudding, plenty of rich gravy and on the side there were some steamed vegetables and a pot of swede. Everything tasted so good! We talked throughout the whole meal about how much we were enjoying it and how it was such good value for the quality. My Mother cooks the best Sunday roast on the planet, if for any reason she wasn’t cooking I would go straight to the Bell Inn, I actually can’t think of anywhere as good for the price.

No we were not still hungry, quite satisfied in fact but yes we were definitely going to have a dessert. We ordered the chocolate brownie with white chocolate sauce and a cheese board to share. The brownie was nutty, squidgy on the inside, (just as it should be) incredibly delicious as was the lovely white chocoate sauce. The cheese board offered a selection of good quality cheeses, far better than we’d had at some other local eateries recently and was the perfect amount to share.

Even with the wine we ordered and the other drinks, we would struggle to make this an expensive meal. I literally couldn’t fault it and wouldn’t want to. I only want to go back for some more.

Is this the best Sunday lunch in Worcestershire….?