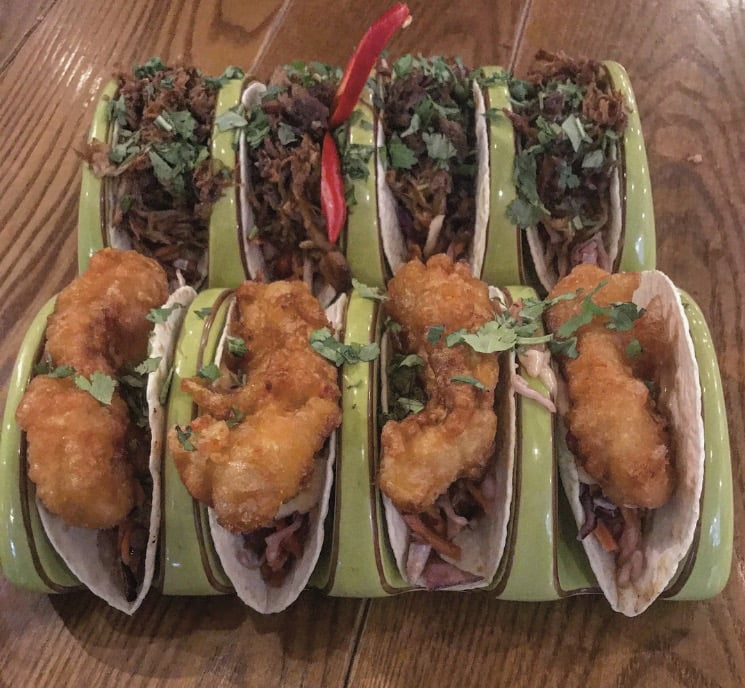 When I first heard that South American restaurant and cocktail bar Bodega had opened on Foregate Street (in the premises that was formerly Foregate Patisserie), I’d assumed it was part of a much larger chain. There were already 2 other restaurants in Worcester serving Mexican style food and although I’d heard from other people that they’d enjoyed the food at Bodega, I hadn’t yet found an opportunity to go along to find out for myself.

It was only during a discussion with fellow Worcester food blogger Miss Pond who corrected me with her knowledge that the Bodega restaurants are in fact independently owned by Bitters n’ Twisted Venues, that I reconsidered giving them a try. There are currently 4 Bodega restaurants in the West Midlands, which started with the Birmingham city centre restaurant, opening in 2010. 4 years later Worcester came next, followed by Leicester in 2016 and Derby being the 4th and most recent in 2017.

After browsing the new summer menu online, Mr R and I were really looking forward to working our way through the street food section in particular. On Wednesday evening when we arrived, the restaurant wasn’t very busy and we were seated almost immediately. I got started with a refreshing blueberry and elderflower margarita whilst waiting for our first plate, the grilled halloumi. The cheese was thinly sliced, grilled but still juicy, soft and warm on the inside just as it should be. We really enjoyed the pineapple salsa, it definitely enhanced the halloumi and would highly recommend this dish from the light bites.

Our waitress must have thought we were slightly bonkers when she took our huge order, although she did have a joke with us by commenting that we were in for a very good evening. Next up were the Bodega homemade chilli nachos. The tortillas were also homemade (I know this as I made some of my own crab nachos recently), but were far less oily than my own attempt. In which case they may have been baked rather than fried and in hindsight I should have asked the chef as it’s been bugging me ever since. The flour tortillas were lightly covered with a mild spice seasoning (possibly Cajun or paprika?), then topped with grilled cheese and a generous helping of chilli. Mr R and I both found the chilli to be full of flavour and of a reasonable heat. The sour cream, salsa, guacamole and sliced jalepenos were the ideal accompaniments. The nachos were indulgent, comforting and indeed very satisfying.

We couldn’t wait to try the Dr. Pepper marinated pork tacos which followed, along with the homemade Baja battered mahi -mahi fish tacos. They were served in funky ceramic green taco holders – if anyone has any idea where to buy something similar, please let me know? I’m not sure that we could taste the Dr. Pepper in the pork marinade as such, the flavour was much like BBQ sauce, maybe a little sweeter, however very tasty. These were our favourite of our 2 taco choices. We were particularly fond of the pink sauce  that was underneath the fish, it was very much like marie rose but with an extra kick of heat. The slaw on both was crunchy and tortillas soft and perfect for holding everything together.

You may be thinking by now that we couldn’t have possibly needed any more food, but we hadn’t finished yet. Our waitress also bought out some Mole chicken quesadillas (don’t worry, no actual moles were harmed), served with a pot of guacamole dip. Along with the grilled halloumi, these were our favourite dish so far. It turns out that the mole was actually a spicy, tomato based sauce, it was also sticky and sweet, making the chicken texture seem very moist. What made the quesadillas even better again was the melted cheese that was visibly oozing out of the sides. We even considered ordering another portion of these and then we remembered that we still had a burrito to contend with!

We decided to go all out and try the slow roasted shredded chicken Bodega burrito for our final course. Our waitress asked how hot we would like it and we decided to go with a slightly hotter then medium heat, as she advised we could always add more hot sauce (available on the table) if we wanted to spice things up even more. Mr R and I were very impressed with the burrito. It was packed full with chicken, rice and 2 types of melted cheese. Although it came with more side dips, we actually didn’t really need them for the burrito because it was so tasty on it’s own as a result of the fiery marinade it had been previously roasting in. The sweet potato fries were really good too, in this case we couldn’t resist the temptation of dipping a few of them into the sour cream.

As we’d sampled a wide range of the menu, Mr R and I were able to get a really good feel for the food offering at Bodega. We both agreed that it was good value for money and lived up to our expectations, therefore overall it was a positive experience.

There are lots of great offers and deals at Bodega, so be sure to ask when you visit, don’t forget to check out the boards with information about cocktail Happy Hour and Thirsty Thursday too. Even better, if you go along (it’s a good idea to book online first) on a Tuesday, you can enjoy a tasty taco and a tequila cocktail (or soft drink) for £10 as it’s Taco Tuesday!

*Although we did not pay for the food referred to in this post, my write up is entirely truthful based on the experience we had on this particular evening. Thank you to Bodega staff for looking after us during our visit.