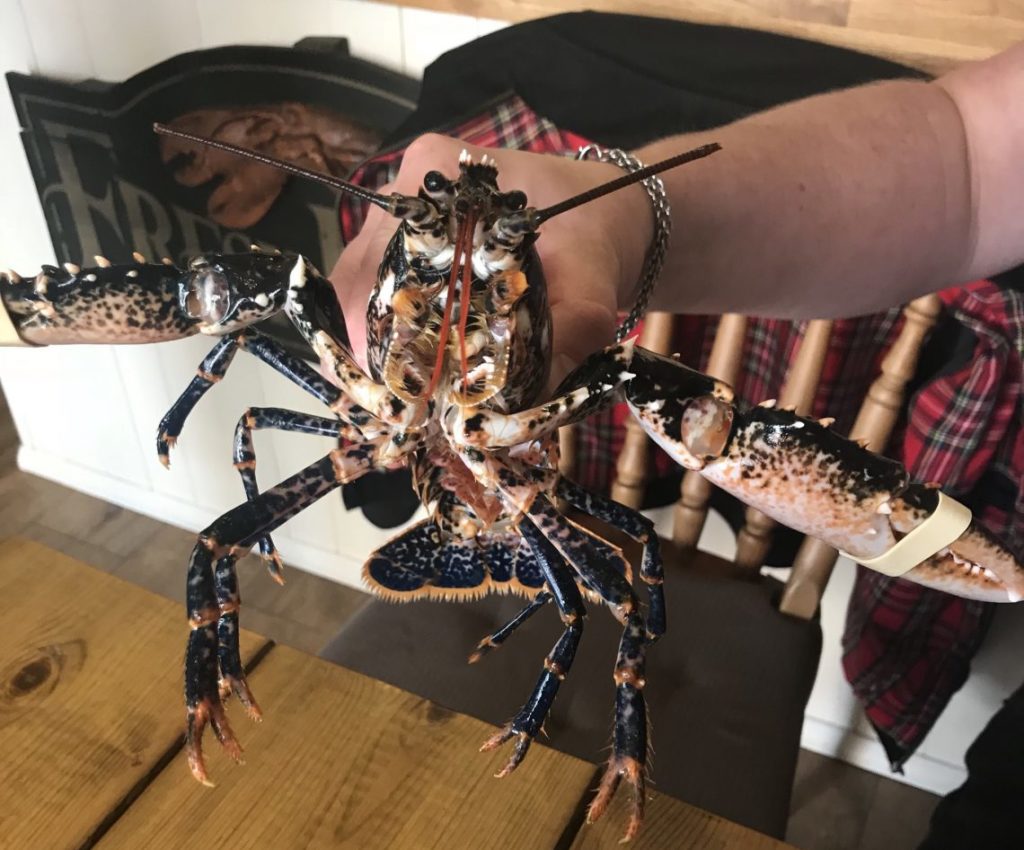 If you haven’t heard of Lobster Café before, there’s a good reason as it’s one of Warwick’s best kept secrets. 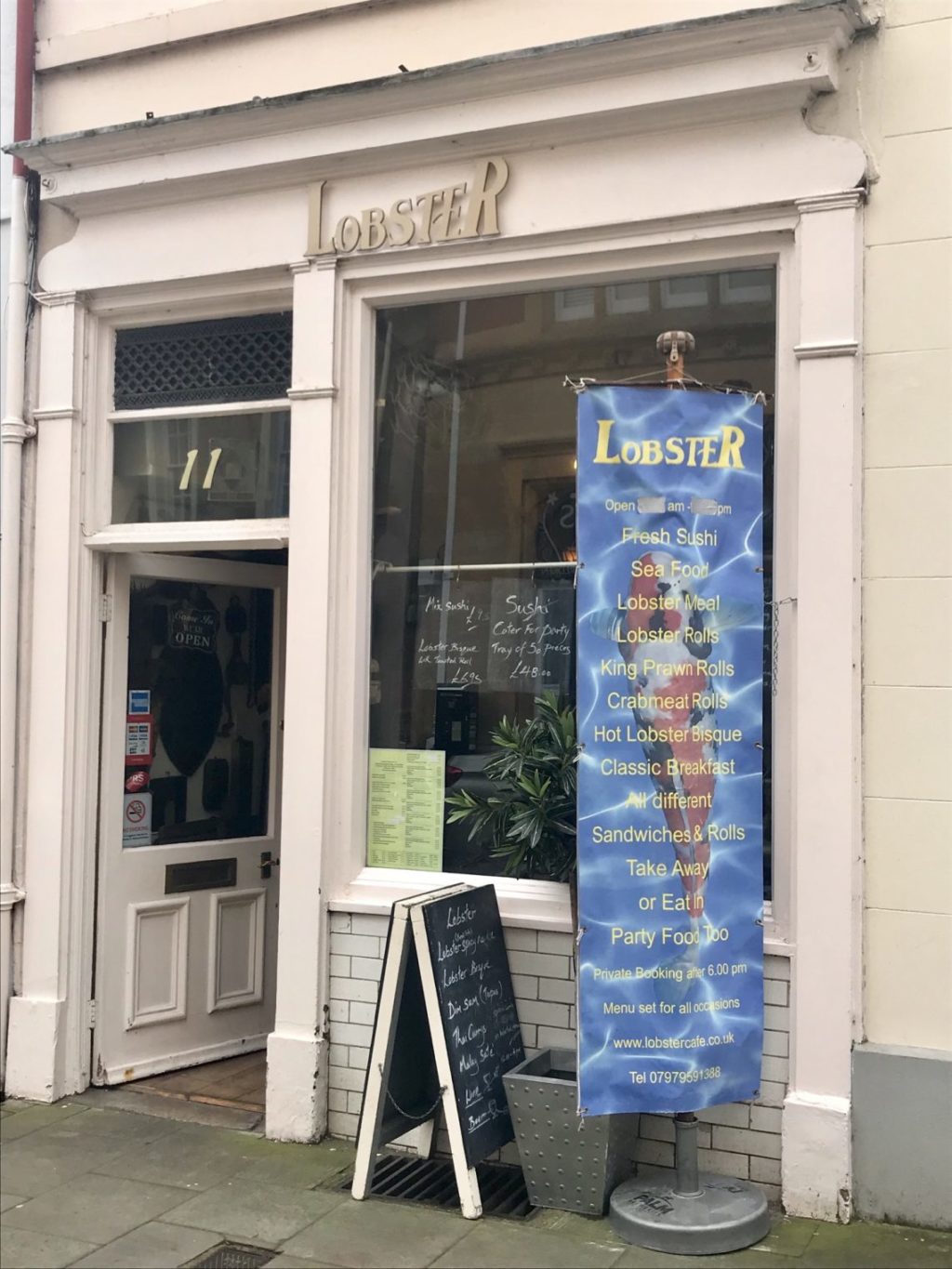 When our weekend work finished for the season, Mr R and I were keen to make the most of our free time together, starting immediately. We have lots of fun trips coming up, most of them involving some incredible foodie places, which I’ll be updating you about along the way. In the meantime, our first adventure started on Saturday when we decided to visit Warwick Castle (fab blog about what to do at Warwick Castle here by family blogger Plutonium Sox). Whilst in the area, we thought we’d take advantage of being in beautiful Warwick and had a mooch around before visiting the castle, and we stopped for some brunch at Lobster Café. 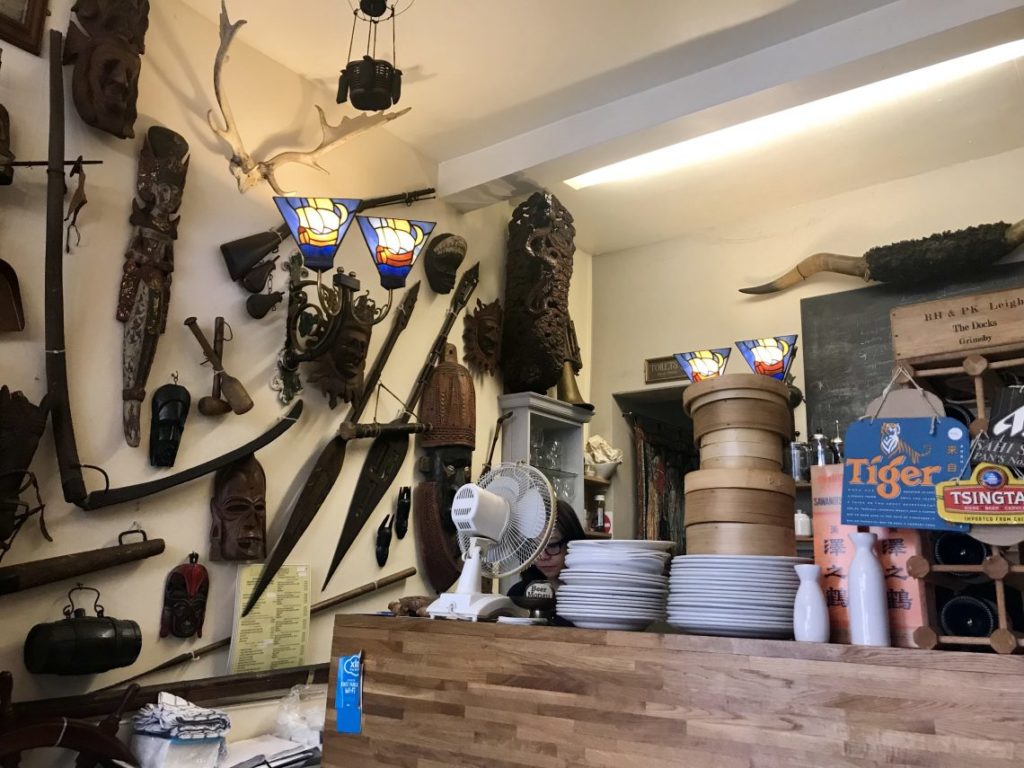 If you haven’t heard of Lobster Café before, there’s a good reason as it’s one of Warwick’s best kept secrets. The quirky little restaurant in the Old Square has only been open since 2015 and has just 10 covers. Our table was booked for 11am (opening hours 11am-10pm on Monday-Saturday) to give us plenty of time to fuel up before our trip to the castle. There isn’t a menu online, but we’d read on some of the TripAdvisor reviews about the dim sum and obviously we wanted to try the lobster.

We were greeted by Kathy who owns Lobster Café – she seated us at a table of 4. Mr R and I were the only customers as they’d just opened the doors, which was actually perfect for us as the whole experience felt more intimate and exclusive. Kathy gave us some menus to look at and explained some of the dishes to us. There was a Thai and Malaysian theme to most of what was on offer, much to our delight. 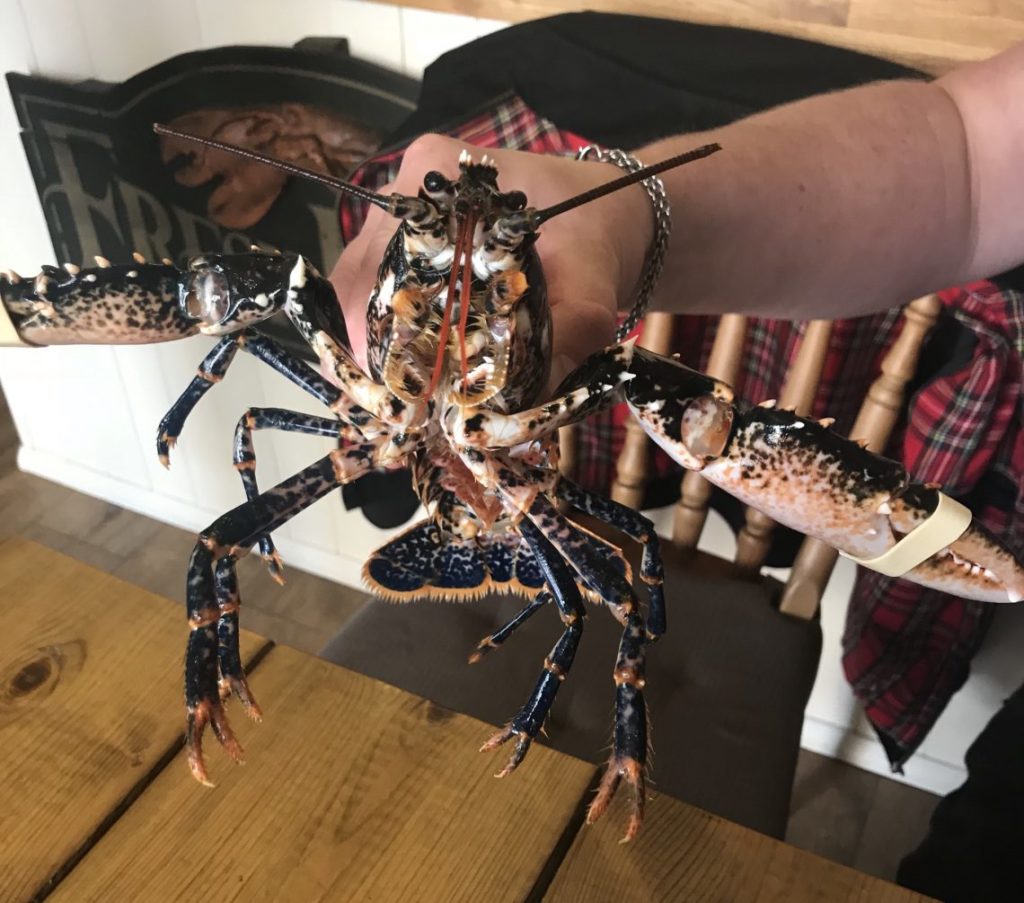 The layout of the menu began with lobster rolls (not available on the day we visited) and freshly made lobster /king prawn /squid sushi available on pre-order (£9.50 each), followed by a half lobster (£28) or a whole lobster (£49) in garlic butter sauce (with grilled cheese and hand cut Maris Piper chips). Dim sum could be ordered at £5.95 each or any 3 for £16.50. The opposite side of the menu listed Japanese, spicy or crispy noodles, which you could have with lobster, seafood, king prawns chicken or vegetables (prices from £12.50 for the vegetarian to £29 with a half lobster and king prawns added). The same seafood, chicken and vegetable options were available with a selection of Thai and Malaysian curries, served with Jasmine rice (prices from £11.50 to £28). 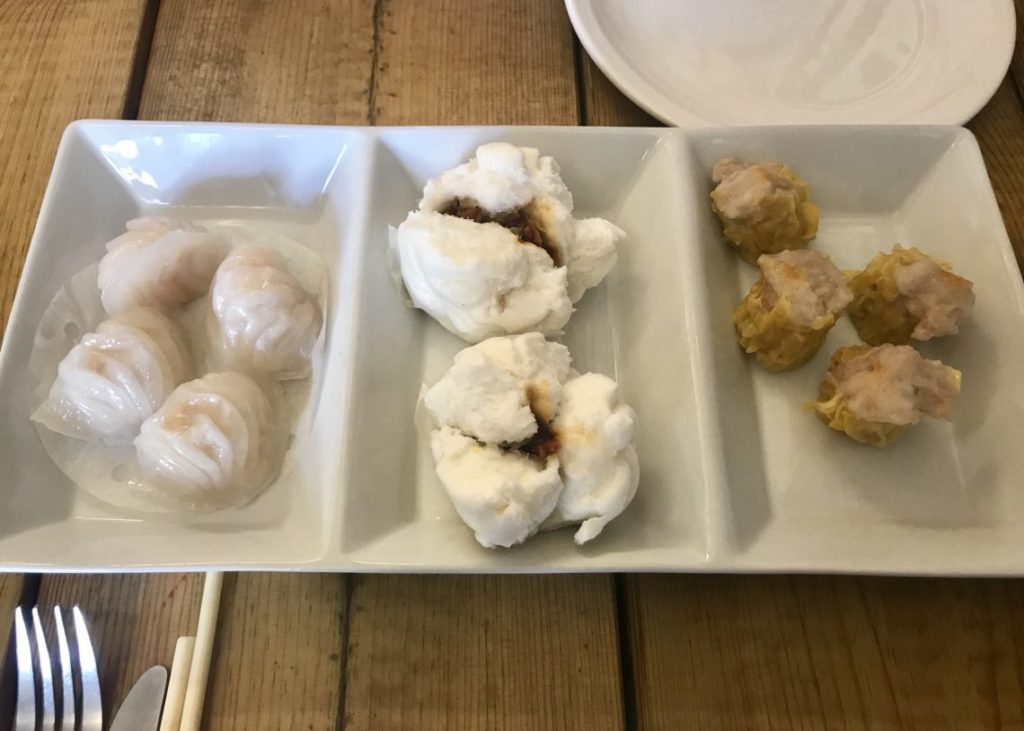 After having read through everything we had another chat to Kathy and told her we’d definitely be ordering a lobster dish and probably some dim sum. Kathy confessed that the fresh lobsters hadn’t arrived yet that morning and got straight on the phone to the supplier to chase the delivery. It was excepted to arrive within the next 30 minutes, so we went ahead and ordered some Sui Mai dumplings (king prawn and pork), king prawn dumplings and Chai Sui buns (roast pork buns). Moments later the driver appeared with a cardboard box which he handed over to Kathy. Whilst our dim sum was being prepared, Kathy brought out the box containing 3 live lobsters and asked us to choose one, and asked Mr R if he’d like to hold one. Not one to turn down a photo opportunity, I got a good snap of him handling our lunch, before its inevitable fate. 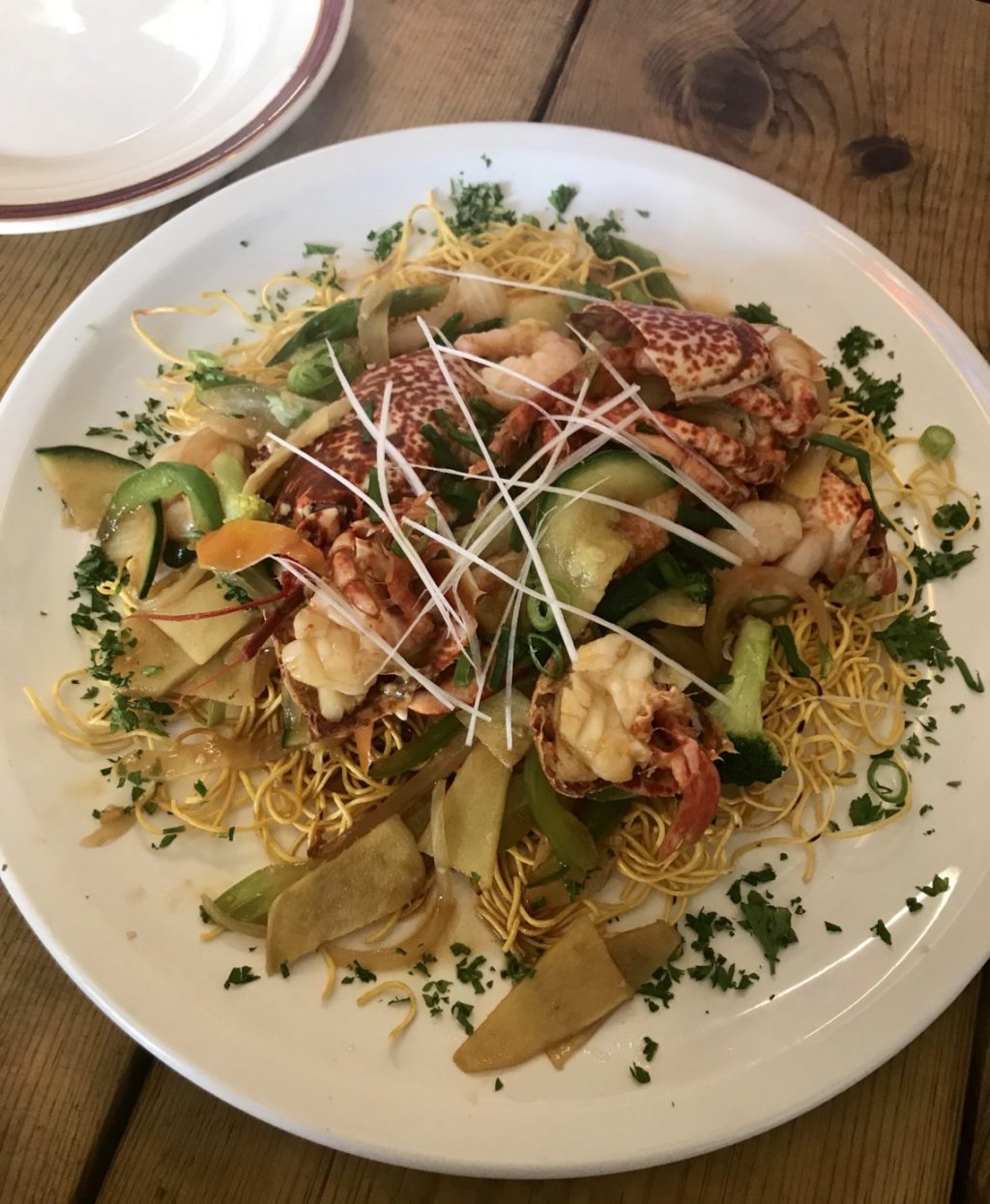 When the dim sum came out we could immediately see we were in for a real treat. Both of us trying the king prawn dumplings first followed by the Sui Mai and saving the soft, fluffy Chai Sui buns until last. Each piece was dipped into one of the 3 homemade sauces of shrimp, sweet chilli, and mild fish sauce. Kathy told us that the dim sum was made by their chef who is from Hong Kong, and possibly why this was the best dim sum either of us could remember having eaten outside of the Far East.

Having only met our friend just 10 minutes beforehand both alive and well, he was now presented beautifully on a plate of crispy noodles with king prawns and delicious crunchy vegetables. This plate tasted every bit as good as it looked – this was a brunch of dreams. 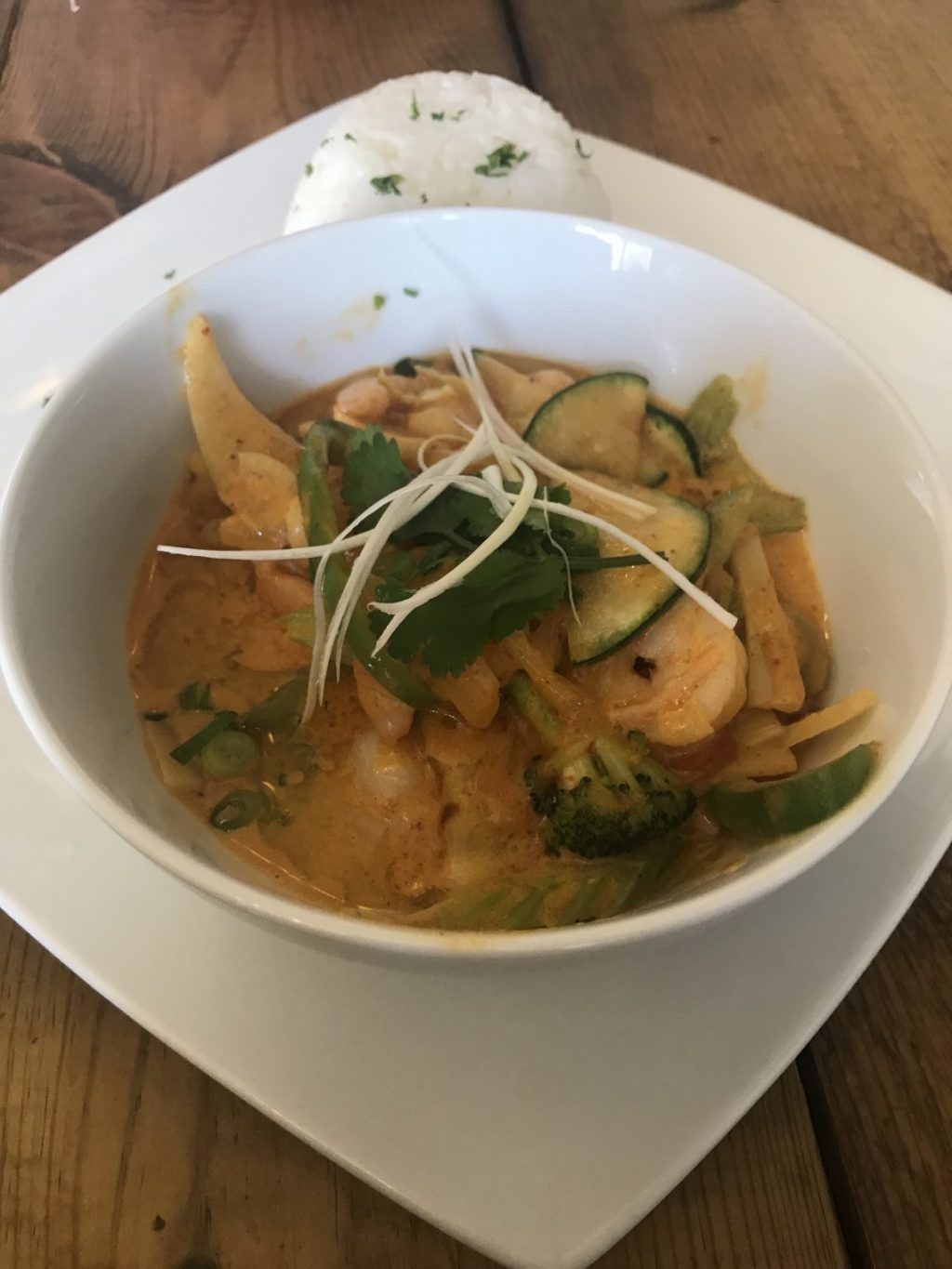 Mr R wanted to try one of the curries and went for the king prawn Malay Panang curry, a good choice as the other chef was from Malaysia. Everything in the bowl was fresh and flavoursome. The sauce was rich but fragrant and the king prawns were meaty and plentiful. Although we’d eaten a lot of food, nothing felt too heavy and our selection was healthy yet fulfilling.

Kathy still being attentive, asked us if we enjoyed the food (which we obviously did…I refer you to our lobster carcass below), and we chatted about the restaurant, expressing our curiosity as to why we hadn’t known of it sooner. As we’d experienced that morning, live lobster is delivered daily by 2 suppliers to Lobster Café. As the restaurant is so small, Kathy has been reluctant to advertise, not wanting to disappoint her regular customers should they run out of lobster during a service, or not being able to seat them. This made sense to us, however at the same time somehow seemed a shame. I left wondering, should we be keeping this secret to ourselves? Clearly we haven’t, so I strongly suggested forming an orderly queue. 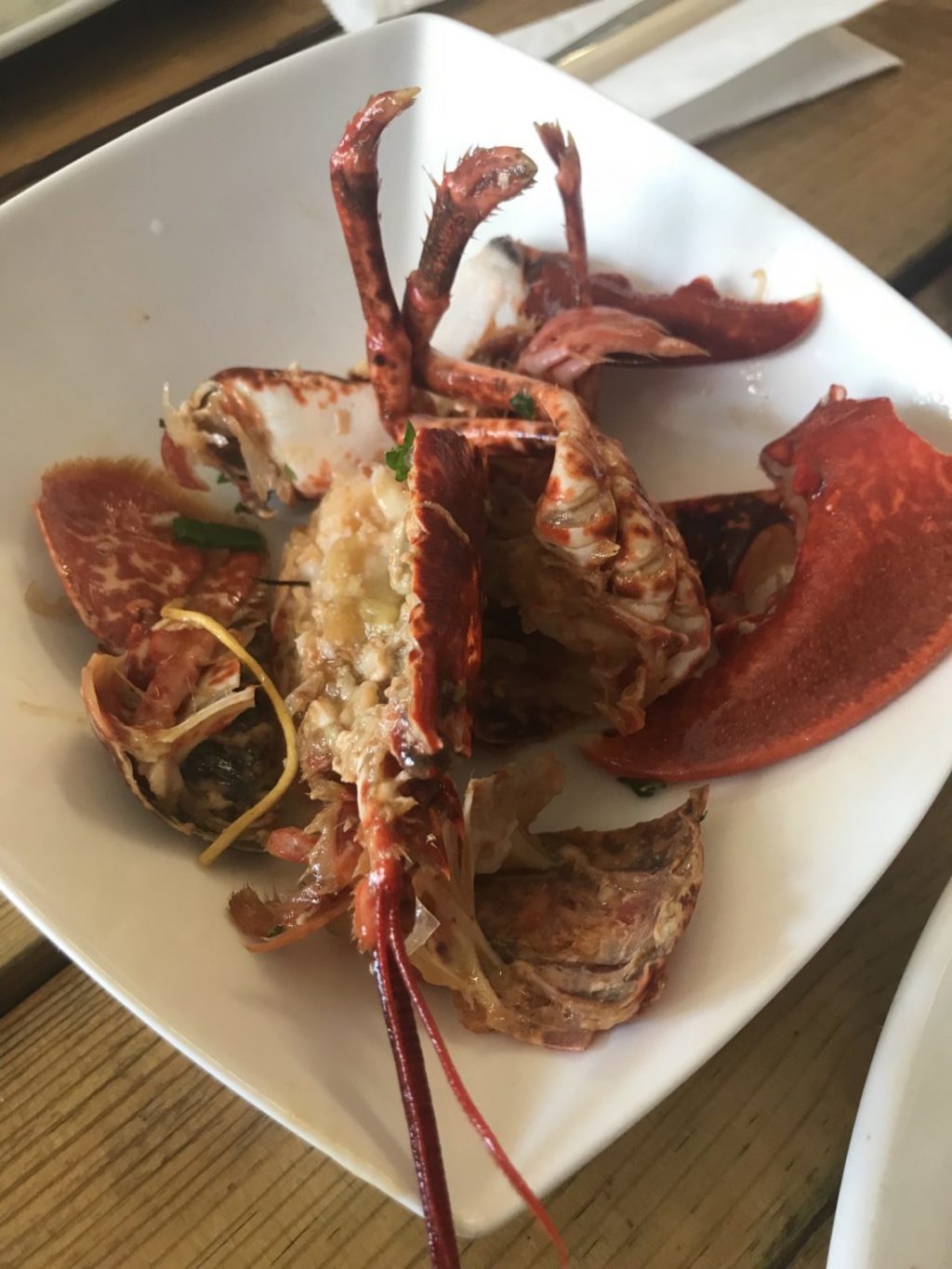