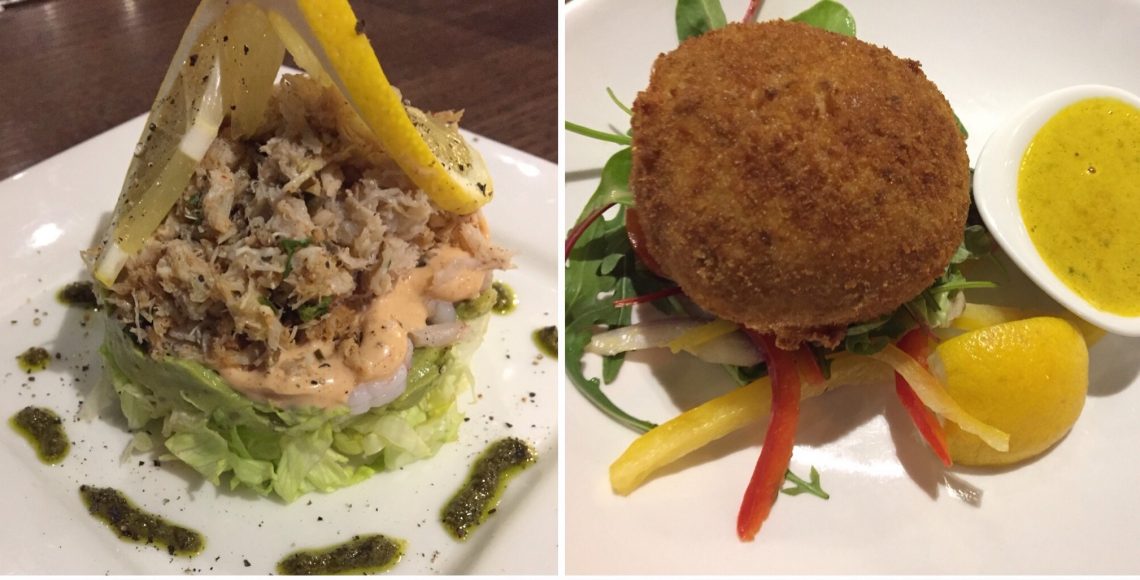 Over the past couple of months we’ve eaten out in most of Alcester’s pubs and restaurants, but I was yet to experience The Roebuck. My boyfriend took me here before meeting some friends for drinks in the town on Friday evening.

The décor in The Roebuck was modern with a country feel, recently refurnished maybe? We had an early reservation and in the 2nd week of January it was probably no surprise that it was fairly quiet in the restaurant. We were seated and ordered some drinks at the table whilst looking at the menu, debating for quite some time what to choose as there were many options that appealed to us…decisions, decisions.

Eventually we agreed to share the Spiced Salcombe Crab, Prawns &  Smashed Avocado with Marie Rose sauce and the Breaded Smoked Haddock & Spring Onion Deep Fried Scotch Egg with Curry Hollandaise to start – both sounded delicious! The starters arrived and looked great so we got stuck in. I started with the scotch egg which was homemade, the egg cooked to perfection. The yolk oozed out and the mild curry hollandaise was a unique but excellent accompaniment. Moving on to the crab and prawns, this was a lovely starter, the fish was fresh and the dish was seasoned really well. The chef could clearly cook.

When eating somewhere for the first time it’s almost become a tradition for me to order the burger. We got the Roebuck burger swapping out the cheddar for mozzarella cheese. We’d also heard that the pizzas were really good here so went for the vegetarian. The main courses arrived at the table and it was the pizza that got my attention. It had a lovely thin base, all of the toppings were fresh and it was covered with a generous helping of melted mozzarella. It actually reminded me of when I used to make my own pizzas at home. The burger was really good too, good quality meat, with sautéed onions and melted cheese.

As usual we were too full to try a dessert as the portions were pretty big, maybe next time. The staff were really attentive at The Roebuck, the atmosphere of the pub and restaurant were also very inviting.