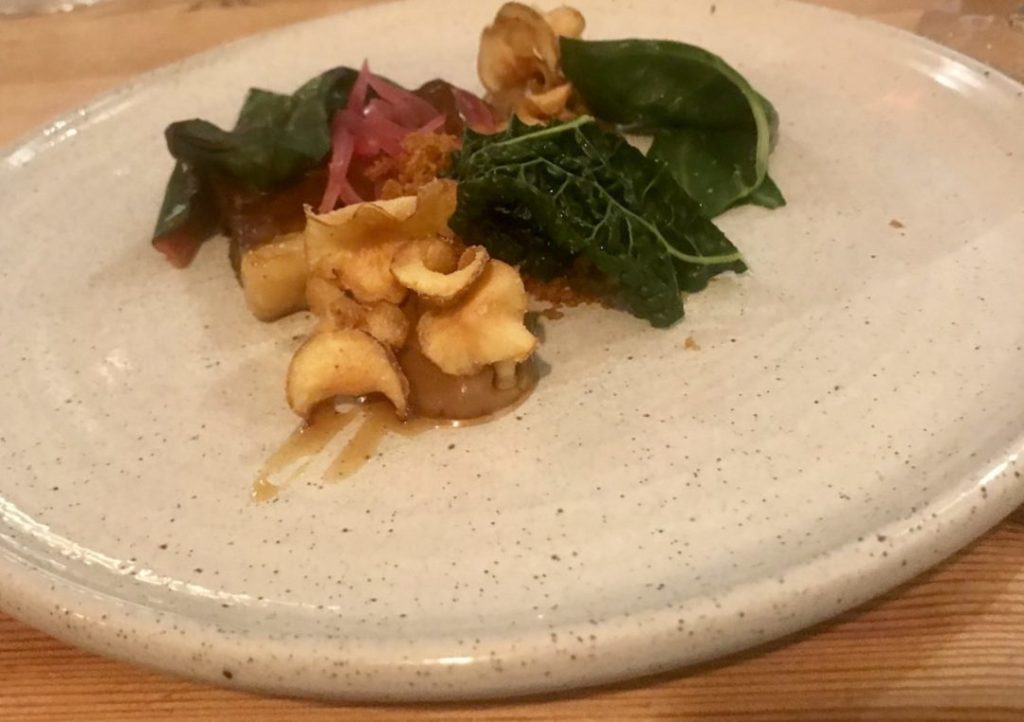 In March 2017, chef Paul Foster opened his own restaurant on Church Street in Stratford-upon-Avon, along with his wife Rhiain. The new venture, also Paul’s dream, was achieved by the help of a crowdfunding campaign the couple had launched through Kickstarter. The £100,000 goal was reached at the beginning of March 2016, and Salt opened its doors 12 months later. This big news was also the last thing that Paul posted on his website that he referred to as his ‘evolving diary’.

We’d attempted several times over the past 12 months to get booked in at one of The Midlands’ most talked about new restaurants, made only more difficult following Jay Rayner’s glowing review a few months back. Finally on the off chance after trying again, we managed to secure a table for lunch, which subsequently was able to be moved to a Saturday evening slot thanks to a last minute availability update posted on Twitter.

Smoked almonds and olives were offered as nibbles whilst we read the a la carte menu (£45 3 course / £37 2 course) and the 7 course tasting menu (£65 per person), and sipped on our celebratory fizz. 10/10 times Mr R and I will make our selections from the a la carte, as there’s often something on any tasting menu that I’m just not sure I like the sound of. This evening was an exception. A drinks pairing was available (£42 per person), but we declined this in favour of a bottle of red to share over the course of the tasting. Freshly baked malt bread was served prior to the first course. The accompanying creamy yellow butter, although delicious, for me wasn’t needed for the bread (like a warm, savoury cupcake), was so beautiful on its own.

Until this day I would never have imagined a week later someone asking what my last ever meal choice on this earth would be, and me responding with “salt baked celeriac“.  Ribbons of celeriac that melted in the mouth like butter, were luxuriously creamy and soft. The salty bacon and crunchy texture complimented the nutty vegetable, enhanced by a deep earthiness that came through from the truffle puree. This was without a doubt the best dish I’d eaten in the past 12 months and was worth every minute of the wait to get here. Sometimes in life you find something that feels like it is yours, it was meant for you, and this was how I felt about this dish. It was mine.

Although Mr R agreed with me that the celeriac dish was entirely stunning, for him it was more about the next course. Thinly sliced cured, raw halibut with an oyster tartare was at the heart of the plate, with a subtle sharpness of pickled kohlrabi bringing the flavours to life. The discs of green apple were not only a visually clean finish, but also added to the overall fresh, spring like vibe. Personally I’m not a huge fan of raw fish or oysters, but that says far more about me than about this very well thought out and delicate example produced by Paul Foster’s kitchen team.

Introduced by our very friendly server as his favourite course, next up was the carrot cooked in chicken fat. This one was a little tricky to eat as it was in a bowl and it needed to be sort of tackled with a spoon and a fork, but that didn’t kind of work with the carrot which needed a definite chop. That aside, it was very tasty indeed. The idea here was that the carrot tasted of chicken as it had absorbed the broth and juices from the meat and this part I really enjoyed. We both struggled a little with the chicken fat, as we found the flavour a little too intense. This was more of a personal preference simply because neither of us are great with meat fat, but we could really understand why it was a popular choice and it was positively unique.

Even though we’d only had tasters of each of the dishes we’d tried so far, everything was so rich and full in flavour that we forgot that we hadn’t even got as far as the main course. Hopefully we would make it to the end! The next course looked deceptively small, and was the last one before the main event. A square of dry aged pork belly was the centre piece and it had been cooked so that the meat had remained succulent and had a lovely glaze to the skin. It was the first time either of us had sampled pistachio and green olives combined together, and although the flavours did seem to work I couldn’t get past the texture which my palette identified as being odd. I overheard a comment from the couple on the table next to us who remarked to one another that this had been their favourite course so far. This was clearly the Marmite dish amongst the tasting menu, but for me I was not convinced.

A choice of fish or meat was available for the main course. I went with the roast Cornish cod and I found everything about it to be exceptional, from the simplicity and elegance of the presentation to having no idea what was in the green sauce but absolutely loving it. I recall remarking to Mr R about how when ordering a fish dish I’m often left disappointed as it never seems to be quite as good as one would have hoped. There wasn’t a thing to be disappointed about here as the cod couldn’t have been any more to my liking, and although I reluctantly shared a mouthful with my fiancé, he shared my views that this was nothing short of marvellous cooking. The wagyu main was also good, but in comparison to the cod it didn’t stand a chance.

At this point an optional extra cheese course was on offer (3 cheese £8, 5 cheese £12). Despite being rather greedy gannits, we were actually quite full and there was still dessert to follow. First up was the brown bread ice cream, a simple pud, but the sweet, sharp and crispy textures were all present to make it suitably enjoyable nonetheless. Lastly a quenelle of Valrhona chocolate ended the tasting menu on an intensely sweet note. I tried a small mouthful along with the cream which had a sourness to balance the chocolate. I’d definitely over indulged and was done, so handed over the reins to Mr R to finish off. Somehow I still managed my share of the choux pastry buns that were presented at the very end of the end. Much like profiteroles, although far more decedent, the bite sized buns had been filled with raspberry and melted in the mouth.

Throughout the evening the service was excellent and the basic, light décor makes Salt a very pleasant place to dine. As we chose the tasting menu we expected some ups and downs as often is the case, but on this occasion the highs were very high. All of the dishes were interesting in their own right and we left feeling content that the experience had been well worth the wait.