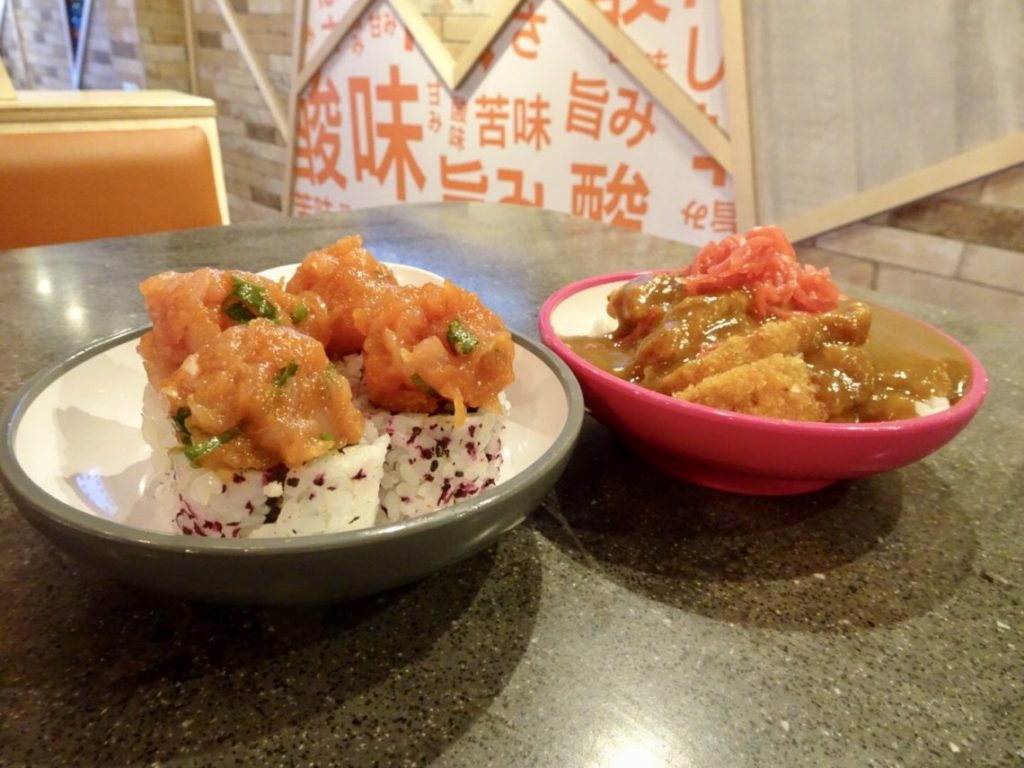 2017 has been a fantastic year for Worcester foodies with lots of new restaurants to try in the city. The Cathedral Square shopping, leisure and dining development (overlooking the iconic Elgar Statue), will have 8 brand new restaurants to choose from, with most of them already having opened their doors before the end of the summer.

Japanese street food and sushi restaurant chain, Yo! Sushi, which displays freshly made dishes on a Japanese style ‘kaiten’ conveyor belt, opened on the corner of Cathedral Square on 20th July. We were invited along a few weeks after the launch to check out the new store.

Walking into the Worcester restaurant immediately felt like a brand new experience to me, despite having been to Yo! twice before (in Birmingham). We were taken to a booth next to the kaiten, and we watched the plates for a few moments as they passed us by. The funky décor and bright lighting added to the fun and colourful atmosphere – it had a really cool vibe. We ordered some wine and began looking at the menu. I loved that there was a variety of Japanese street food available, as I’m not very keen on raw fish myself.

The Blossom Rolls were a must as they were filled with prawns and avocado, but the strikingly purple Shiso Yukari (sprinkled on the rice) was what got my attention. It was only when we looked back the menu afterwards to find out what the deliciously, shinsen (Japanese for ‘fresh’), spicy topping was that I discovered I’d just eaten raw tuna, and really enjoyed it. More dishes, which had been prepared in the open kitchen in front of us, started to arrive at the table. The Chicken Yakisoba was next, which we both found a little bland at first taste. However, after adding a touch of soy sauce (available on every table), it seemed to bring it to life and the dish was polished off.

The Katsu Chicken Curry was possibly the least of our favourites from the selection, mainly because it didn’t taste dissimilar to curry sauces we had tried many times before. It was also a little cold compared to the rest of the food, but Mr R liked it enough to finish off the plate. The Duck Gyoza from the street food section of the menu were full of flavour, piping hot inside and we both really enjoyed them. Our 2 favourites so far though were the Popcorn Shrimp and Cod Nanbanzuke. The prawns were covered in a tempura batter, then topped with a sweet shiro miso sauce and hint of chilli. The bite sized cod fillets, also in a light batter, were coated in a sweet and sour sauce. Despite neither of us having a particularly sweet tooth, we both felt the 2 dishes were something a little bit different and the combination of flavours and textures worked really well. 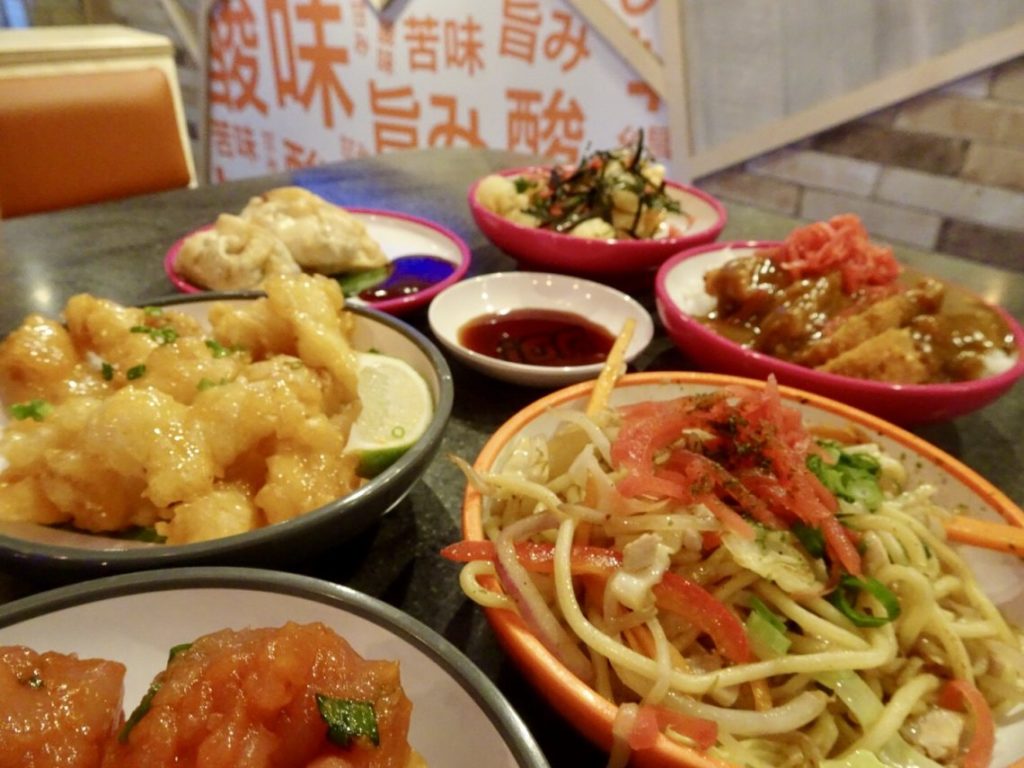 It’s very easy to order more food at Yo! Sushi even when you’re already full. As well as being able to pick up dishes off the kaiten as you please, there’s also a button at each table which you can press to call a member of their team over at any time. We were having a great evening and as we hadn’t used the button yet, because the staff were on hand at all times, we thought it would be a great excuse to sample a couple more plates before we called it a night.

I very much wanted to try the Hoisin Duck Bao (£4.70) and we were both intrigued by the Soft Shell Crab Roll (£4.70), so Mr R placed our final order. Whilst the kitchen were making these up for us, we took a moment to appreciate how impressed we were with the food we’d eaten and the fantastic service we’d received from the extremely knowledgeable and friendly staff. Having only been open for 3 weeks when we visited, the staff whom appeared to be fully trained on the menus, were able to answer all of our questions, and made us feel our custom was valued which made us want to go back again.

First to arrive at the table was my choice, the Hoisin Duck Bao. The crispy, shredded duck was drizzled with a sticky Hoisin sauce and came in a fluffy Hirata bun. The pickled cucumber slices were the perfect match, resulting (for me) in a divine Japanese style burger. Even at this stage of fullness I could have quite happily gone for another one. Our last dish were the Soft Shell Crab Rolls. The 2 large rolls were filled with soft shell crab meat, and pickled ginger and came with a sweet chilli sauce on the side. We hadn’t understood when we ordered that ‘Yuzu Tobiko’ is a type of flying fish roe. The texture of the fish roe as it burst in our mouths was really fun, it complimented the roll perfectly and was visually really interesting. 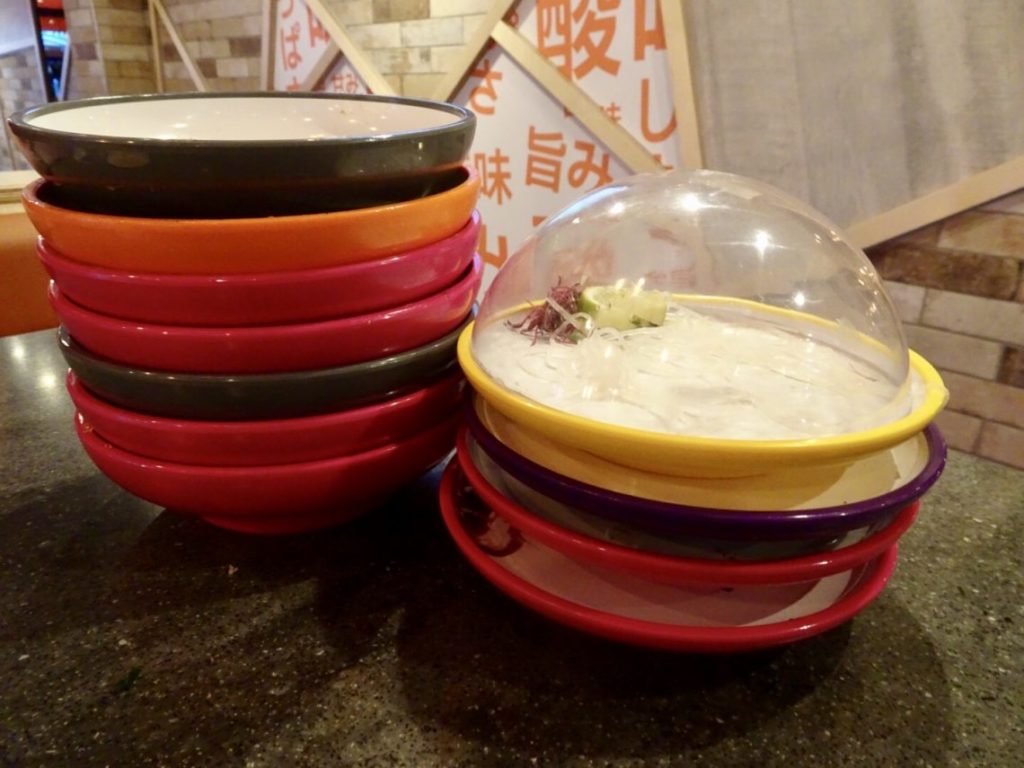 Our choices didn’t necessarily work out to be the cheapest of the options available, but with ordering 11 different dishes, we got a really good feel for the menu and of what we’d order when we next visit. Yo! Sushi does have regular offers on their website and in-store, with a favourite being Blue Monday, when a selection of 45 of their blue dishes are just £2.80 each. Unlimited sparkling and still water is available at every table for £1.30 each at all times, as well as complimentary pickled ginger, wasabi and soy sauce.

We left having had a very positive experience during our first time at Yo! Worcester and very much look forward to returning soon.

*Although our food and drinks were complimentary, my write up is entirely truthful based on the experience we had on this particular evening. Thank you to Yo! Sushi for the invite and to Shelby and the team for looking after us during our visit.