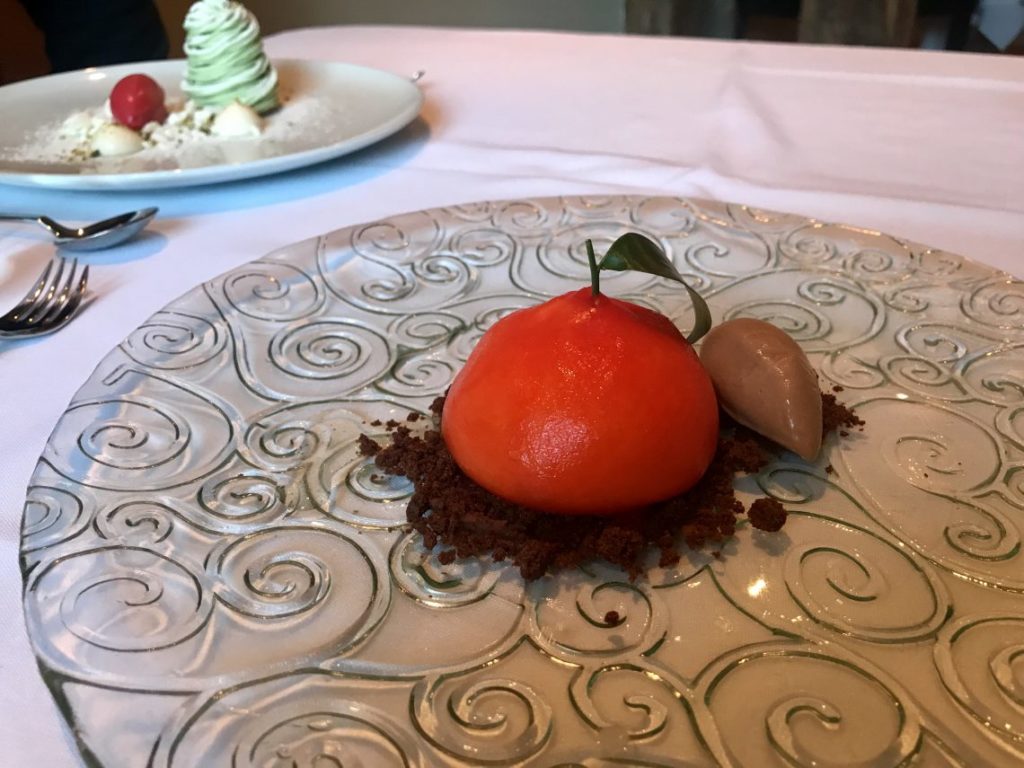 The Christmas week always goes by so quickly, and this year we really only had a couple of days without ready made plans. As always Mr R and I like to make the most of any free time we have together, so he set out to try and get us a table at one of the fine dining restaurants that has been high up on our list for some time now – Cheal’s of Henley.

Head chef Matt Cheal (formerly at Simpson’s in Birmingham for 17 years) runs the kitchen at Cheal’s, which is owned by his father. The family re-opened the restaurant following a refurbishment by Matt’s brother and their Mum, who chose the new interior, in October 2015. As well having an entry in The Good Food Guide 2018, awarded with an impressive cooking score of 5, Cheal’s of Henley also boasts a 5 star TripAdvisor rating from customers’ reviews. 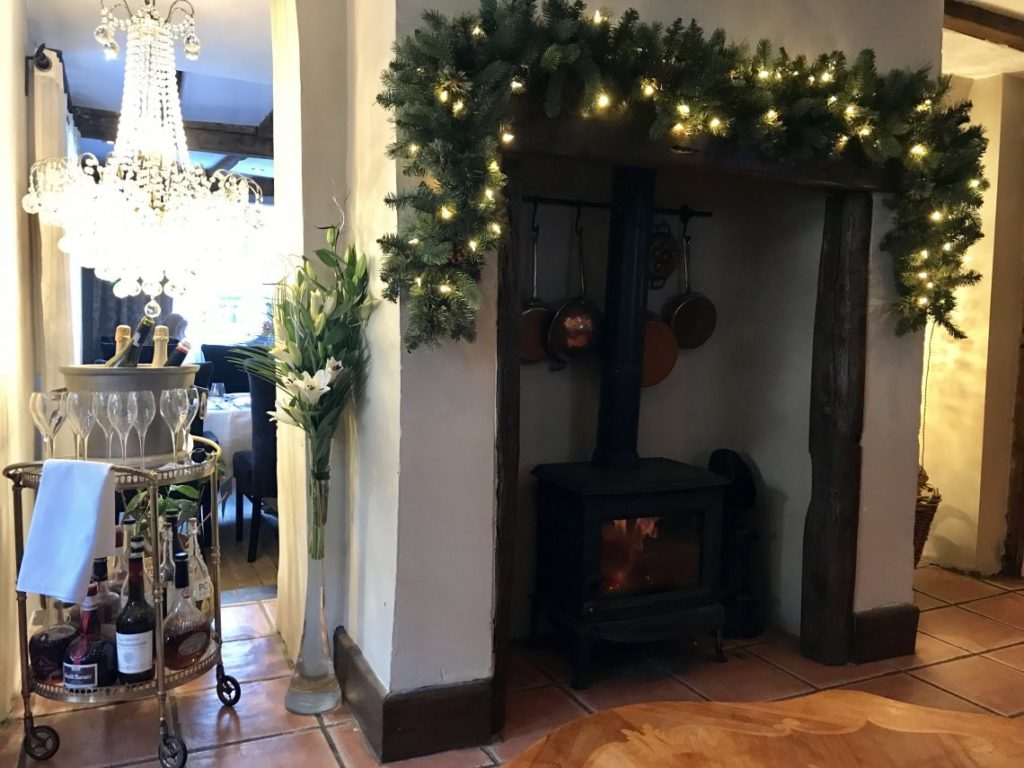 Henley-in-Arden is less than an hour’s drive for us, and we couldn’t believe our luck when we managed to secure a table there for lunch. We parked at the other end of Henley-in-Arden’s mile long high street, arriving outside the historic black and white cottage where Cheal’s resides. Inside was a cosy waiting room with a warming wood burner inside an open fire place. Our coats were taken and we were left to relax on the sofa whilst looking over the menu.

There were 3 menus available for lunch; menu ’33’, menu ’55’ and menu ’77, which all related to the price (3 courses). Restaurant manager, Yannick Raymond, explained that we could mix and match from all of them, but we both selected dishes from menu ’55’. In the meantime we were allowed time to enjoy our drinks and found ourselves absorbed with the TV screen on the wall showing the chefs plating up food ready for service – what a neat idea! We were also presented with a cod croquette canapé each. The fish (cod cheeks?) had been coated in a coriander, 5 spice and sesame seed sauce teriyaki style.

At the table a warm serviette is served, shortly followed by an amuse bouche of pumpkin soup with a sage pesto. The bread basket is made of wood and filled with homemade sourdough and crispy white rolls. After smothering our bread with the salted butter and whipped pork fat on offer, we both looked around the room to check that nobody was watching before scooping up the residual soup from inside of the glass bowl.

We excitedly awaited our starters; my choice being the crispy duck egg yolk, smoked haddock, potato espuma, leeks, avruga caviar. One of my favourite things about eating in restaurants is the anticipation of how the dish will be presented, and I love the surprise of something new. Served in the centre of a black bowl, the crispy duck egg sat on top of a smooth and creamy potato espuma (a Spanish word which translates to ‘foam’), hiding the succulent pieces of haddock only to be revealed once I’d dug a little deeper. A rich orangey yolk oozed out of the centre of the crispy egg, adding another texture to the dish. Crispy puffs of rice also gave another dimension, making the whole plate both look enticing and taste heavenly. It had all of the flavours of a fabulously creamy, luxurious fish pie.

Just one glance at the above photo and the memories come flooding back of this perfect winter’s day pasta dish. A flavoursome game bouillon was poured over the fresh pasta ravioli filled with venison on Mr R’s starter. Lyonnaise onion and chanterelle mushrooms were much more than a decorative addition. The mushrooms in particular were pleasing to the eye, and the taste an earthy and meaty treat for the tongue. We hadn’t even come to the main course yet and already Cheal’s rivalled any Michelin standard food either of us had tried before. What chef could be more deserving with cooking this good?

Often we find ourselves more wowed by the appearance of a starter and by the time the main comes it’s rarely something that we haven’t seen before. This time was different, this time we continued to be wowed. I’d ordered the North Atlantic halibut, and although the fish was cooked beautifully, the nutty hazelnut pesto on top gave some extra moisture that I think sometimes lacks in a fish dish. The red wine reduction looked almost like a thick balsamic glaze, the flavour had depth and actually it was enough despite not being an actual sauce or gravy.

We were both curious to see how the steak pie would be presented, knowing fine well it wasn’t going to be a steak pie as we knew it. The cheek had been slow cooked and served inside of the pastry (the pie). Thick slices of fillet were generously seasoned and perfectly pink, with all of the components coming together. The dish screamed “winter is here” with a big reassuring hug. Personally I would very rarely order any kind of steak in a restaurant as I believe you should always choose something that you couldn’t cook yourself at home. I certainly wouldn’t be able to cook anything close to this at home, and didn’t hesitate for a moment when I was offered a second mouthful.

Thankfully there were only two desserts to choose from on menu ’55’, so we asked for one of each. I’d spotted the Mandarin petit gateau posted by pastry chef Howing Lai on Cheal’s Instagram account before our visit, so this was a must for me. In Howing’s own words, the “Mandarin petit gateux is made up of a mandarin mousse, clementine and bergamot compote, soft mandarin jelly skin. Sitting on a Manjari creameux and a flourless chocolate soil and served with Valrhon Manjari ice cream”. I say no more! Yannick asked us if we knew what the leaf was which garnished the gateau. We didn’t recognise the ruscus leaf at the time, but later discovered the plant is actually growing in The Walled Gardens owned by my parents.

The other dessert was a pistachio Mont Blanc which resembled one of those awesome Twister lollys you used get from the ice cream van. The tangy redcurrant sorbet cut through the sweetness of the mountainous mousse, with meringue pieces and crushed pistachios to give some crunch. Both were delicious, but my favourite had to be the mandarin gateau. Handmade petit fours finished the meal and came presented in a beautiful wooden box, but we couldn’t eat another thing so had to take them home.

A month later and we’re still talking about our lunch at Cheal’s. The lunch menu offers great value with prices to suit a range of budgets. You really don’t need to spend a fortune to get a taste of Cheal’s. We’re already planning a return visit and next time we hope they’ll have their much deserved michelin star.