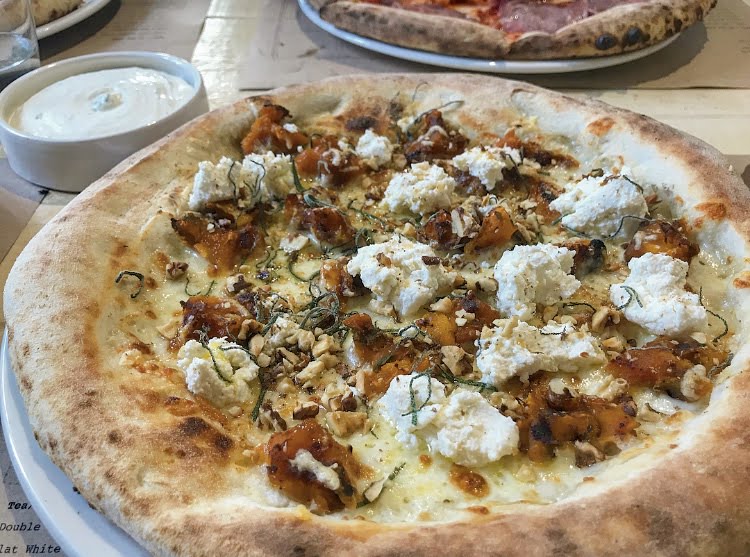 Anytime I have plans to head down to Bristol, the first thing I do is ask the ‘Burger Queen’ of the South West (and Bristol food blogger) Natalie Brereton for suggestions on where to eat. Mr R and I had my Mother joining us for lunch, so we wanted to find somewhere with a touch of sophistication, and where the food was guaranteed to be good, but our lunch spot also needed to be fairly casual. Rather than burgers this time, I had pizza on my mind so Natalie suggested that we check out Pi Shop.

Pi Shop is a new pizzeria owned by Bristol chef Peter Sanchez-Iglesias which overlooks the harbourside. After Peter and his family relocated their Michelin-starred restaurant Casamia to the redeveloped Victorian Hospital on Lower Guinea Street, Pi Shop opened just a few months later and then Spanish tapas bar Paco Tapas a few months after that. Conveniently all 3 restaurants are now located next to one another. Pi Shop is already getting noticed in its early days and has a ‘Local Gem’ entry in the Good Food Guide 2018.

After a short walk across the city we arrived at Pi Shop for the first time and were delighted to be greeted by friendly Italian staff. Although we had pre-booked, we were invited to sit at a table of our choice and selected seating by the window where we could also see into Paco Tapas next door. I got started with a Bramley apple & prosecco Bellini (£7.50), my Mum had a Rose wine (2016 Nero d’Avola & Syrah, Planeta) and Mr R went with an orange juice, which he said was one of the best freshly squeezed juices he’s had in a long time. We decided to share a garlic bread (£6) and Caprese – buffalo mozzarella, tomato, basil (£8) to start.

The garlic bread dough was light and crispy on the edges, it had been cooked perfectly in the copper wood-fired pizza oven that dominates the centre of the open plan cooking area, which we spotted when we first walked in to the restaurant. Warm garlic butter and parsley was scattered on top making it wonderfully moreish and comforting. My eyes lit up when I saw the Caprese as the mozzarella ball looked exactly like the ones Mr R and I had been eating every day in Florence back in August that you very rarely see here in the UK. I did the honours and cut into the cheese, exposing the soft centre that we’d hoped to see inside. The creamy ball of mozzarella just melted in our mouths and it took us straight back to memories of our holiday where we had got engaged. The tomatoes, dare I say, tasted even better than the ones we had been eating in Italy – they were much riper and more flavoursome.

In hindsight we should have ordered only 2 pizzas between the 3 of us after sharing the 2 starters. My Mum’s choice was The “JR” – black olives, anchovies, basil (£10.50). This pizza is named after Peter’s brother Jonray Sanchez-Iglesias who ran Casamia with Peter, but sadly died of skin cancer just 2 days before the restaurant was named by the Sunday Times as the fourth best in the country. £1 from every “JR” pizza is donated to SKCIN. As with the garlic bread the dough was light and fluffy inside and crispy on the outside from the smoky oven. The variety of flavours made this a superbly authentic Italian pizza with a generous helping of toppings. My Mum commented on how tasty the olives were in particular.

Mr R went with the manly meaty ‘Meat Feast’ pizza topped with a selection of Artisan cured meats (£16). A little pricier than the other pizzas on the menu but well worth it for huge slices of delicious meat which we would assume must have been sourced from the Italian food markets. A generous helping of Nduja also featured, something we’d both become quite partial to during our Florence trip. I also tried a slice and have to say I can’t think of anywhere I’ve been to outside of Italy where the pizza tasted as good as the Italian’s pizzas until eating at Pi Shop. A fine recommendation indeed Natalie!

We also ordered the French herb dip (£2) which was suggested to us by our waiter and I would urge you to try. It was a tasty and moreish addition, and ideal for dipping our pizza crusts – my favourite part. I loved the coolness of the thick, garlicky dip and ate most of it to myself. My pizza choice was the seasonal pumpkin, sage, walnut, Westcombe ricotta (£13) – a pizza that tasted every last bit as good as it sounded. Again it was fully loaded with quality ingredients and in my opinion great value for money. None of us finished our pizzas (including me) as we’d clearly over ordered, but I don’t regret it for a second. I enjoyed another Bramley apple Bellini followed by a glass of prosecco, and for a couple of hours at least felt like I’d been transported back to beautiful Italy.