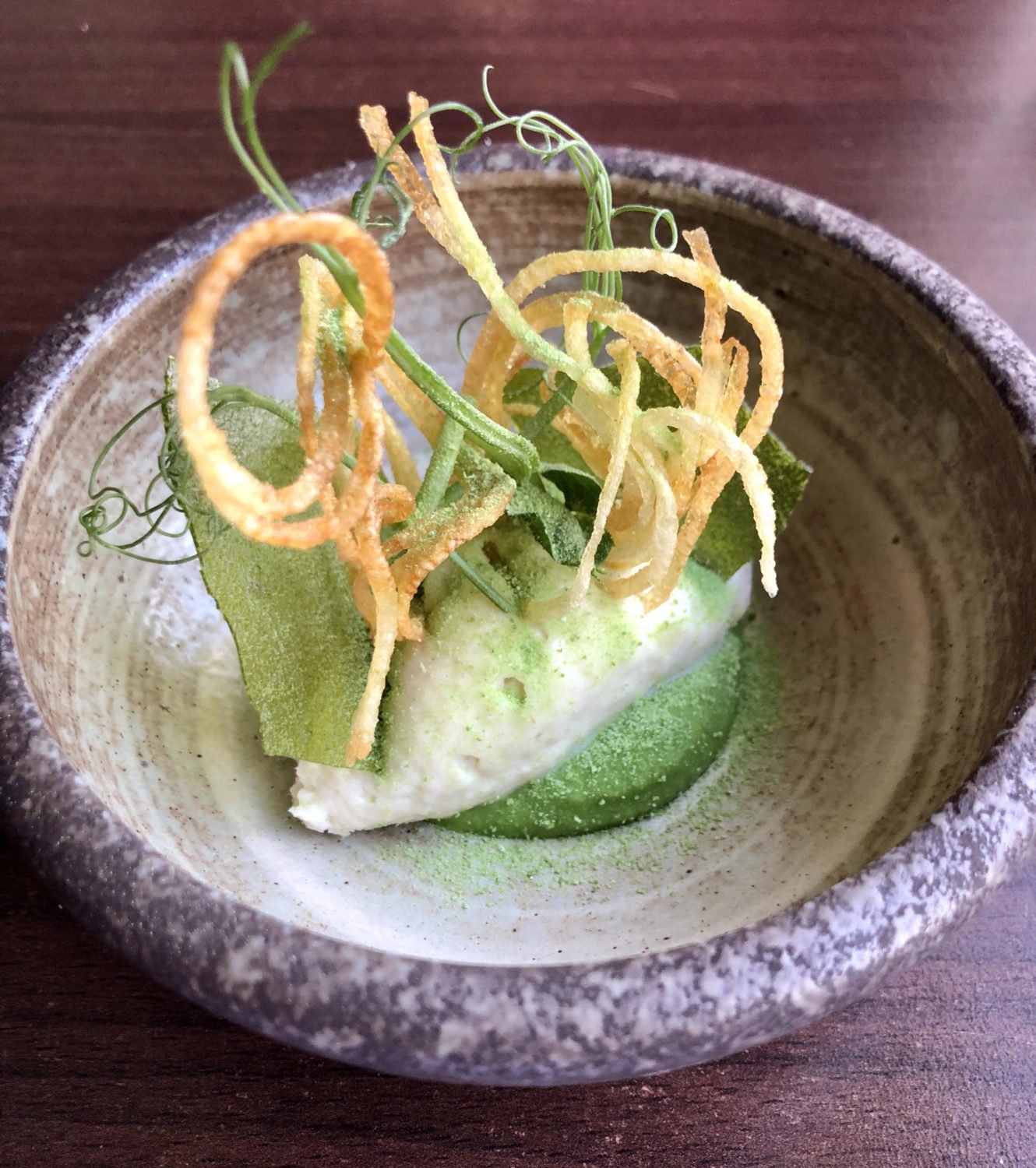 We visited Purslane Restaurant, Cheltenham on behalf of WR Magazine to review the restaurant, which can be found on pages 8-9 of the spring 2020 issue of the magazine. Here’s what we thought…

Purslane is an independent, family run restaurant which can be found quietly tucked away on Rodney Road, just a stone’s throw away from the hustle and bustle of Cheltenham’s busy high street. Purslane prides itself on using only the freshest ingredients available and the most sustainably-caught seafood from British waters. 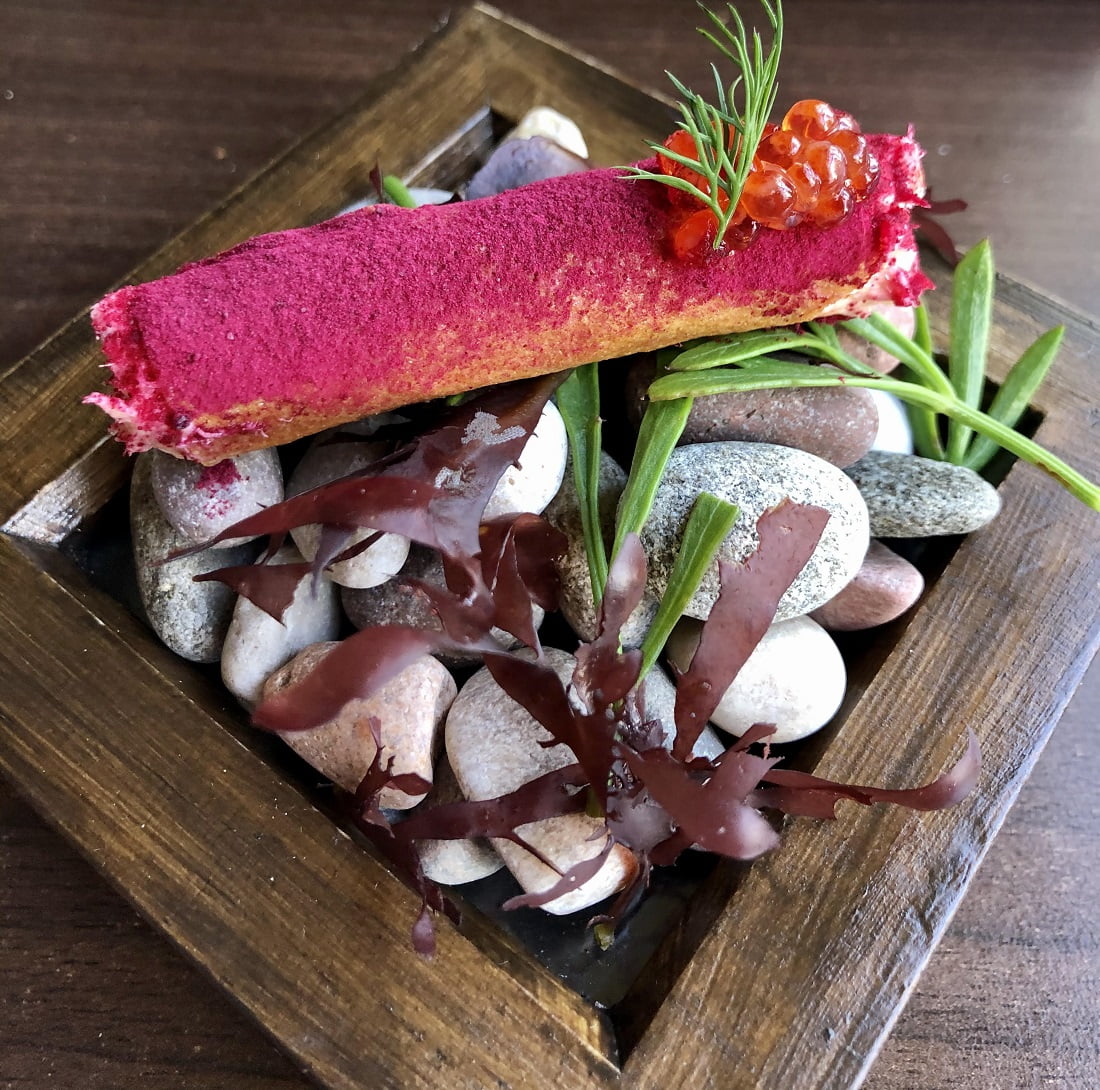 Chef patron Gareth Fulford, along with his wife Helena, began their journey with Purslane Restaurant back in 2012. A dream come true for Gareth who had a wealth of experience working in professional kitchens over 2 decades, including The Kingham Plough, as well as cooking for the Queen for three years at the Chelsea Flower Show and at Royal Ascot in the earlier stages of his career. 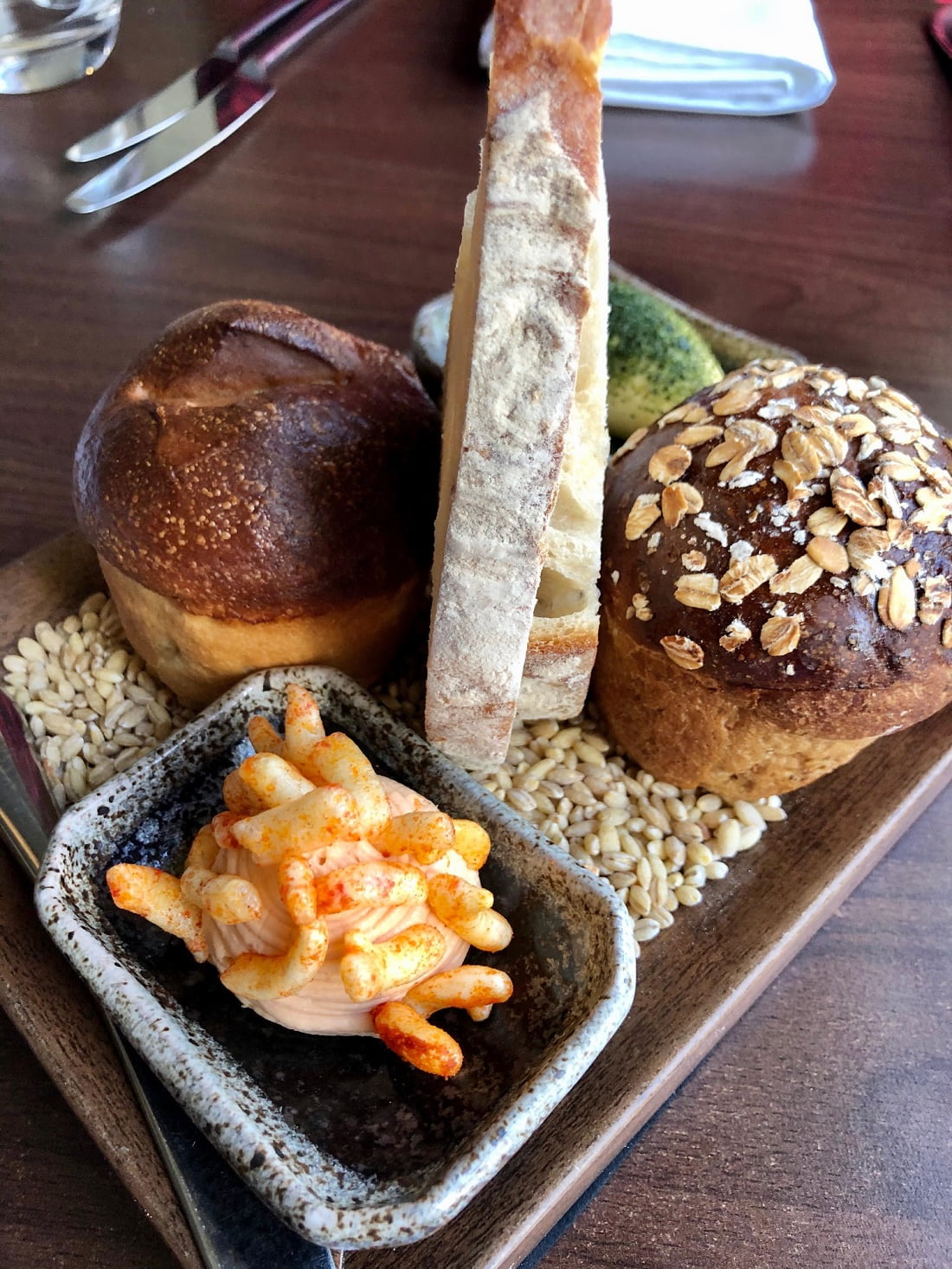 The dining room setting is intimate and informal, with a tasteful décor. The front of house team are knowledgeable and attentive, and service is well-timed, yet non-intrusive.

Having ordered only from the al a carte menu on the two previous times we’d dined at the restaurant, we were excited to be taken on a journey through a selection of courses with the five course tasting menu (£65 per person). We got started with a trout cannelloni topped with caviar and beetroot powder, followed by an amuse bouche which was Gareth’s take on fish, chips & peas and tasted exactly as described. Both were a visually stunning and flavoursome introduction into the two and a half hour lunch sitting. We also enjoyed a selection of freshly baked bread with two types of butter – seaweed and a smoky taramasalata version, before the first course arrived. 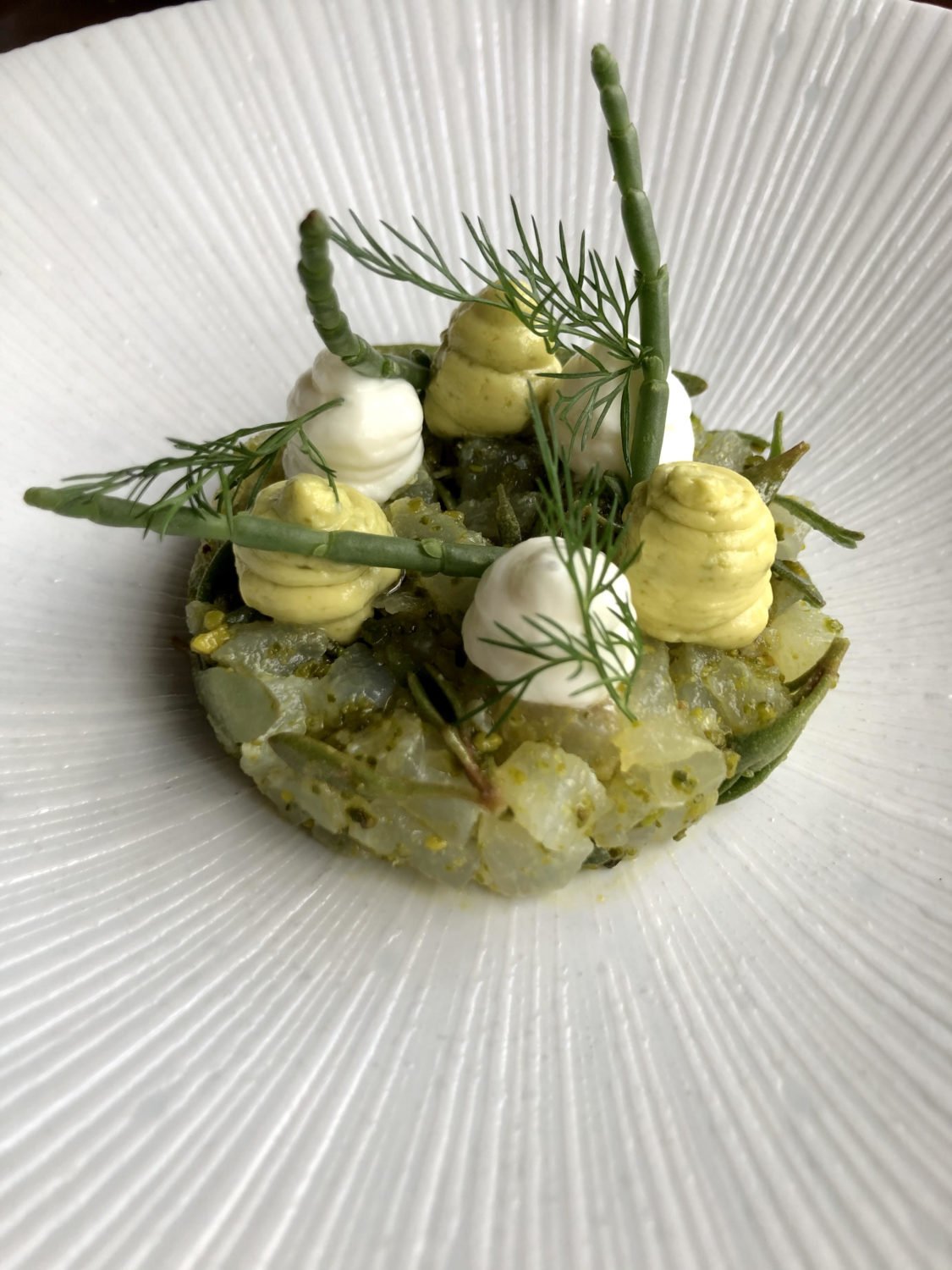 The Cornish brill, cured in Twisting Spirits Gin (a local gin made in Tewkesbury) with douglas fir, pistachio, yoghurt and purslane was packed full of the tastes of Christmas, and I mean this in a very good way. The brill was light and fresh and this continued through to the next course of Cornish crab, golden beetroot, brown shrimps, radish and apple dashi. The small plates of fishy snacks and starters made for a perfect lunch menu, which for me would have continued swimmingly with the scallop course which fits in next on the seven course version of the menu (available on Fridays and Saturdays for £78 per person). 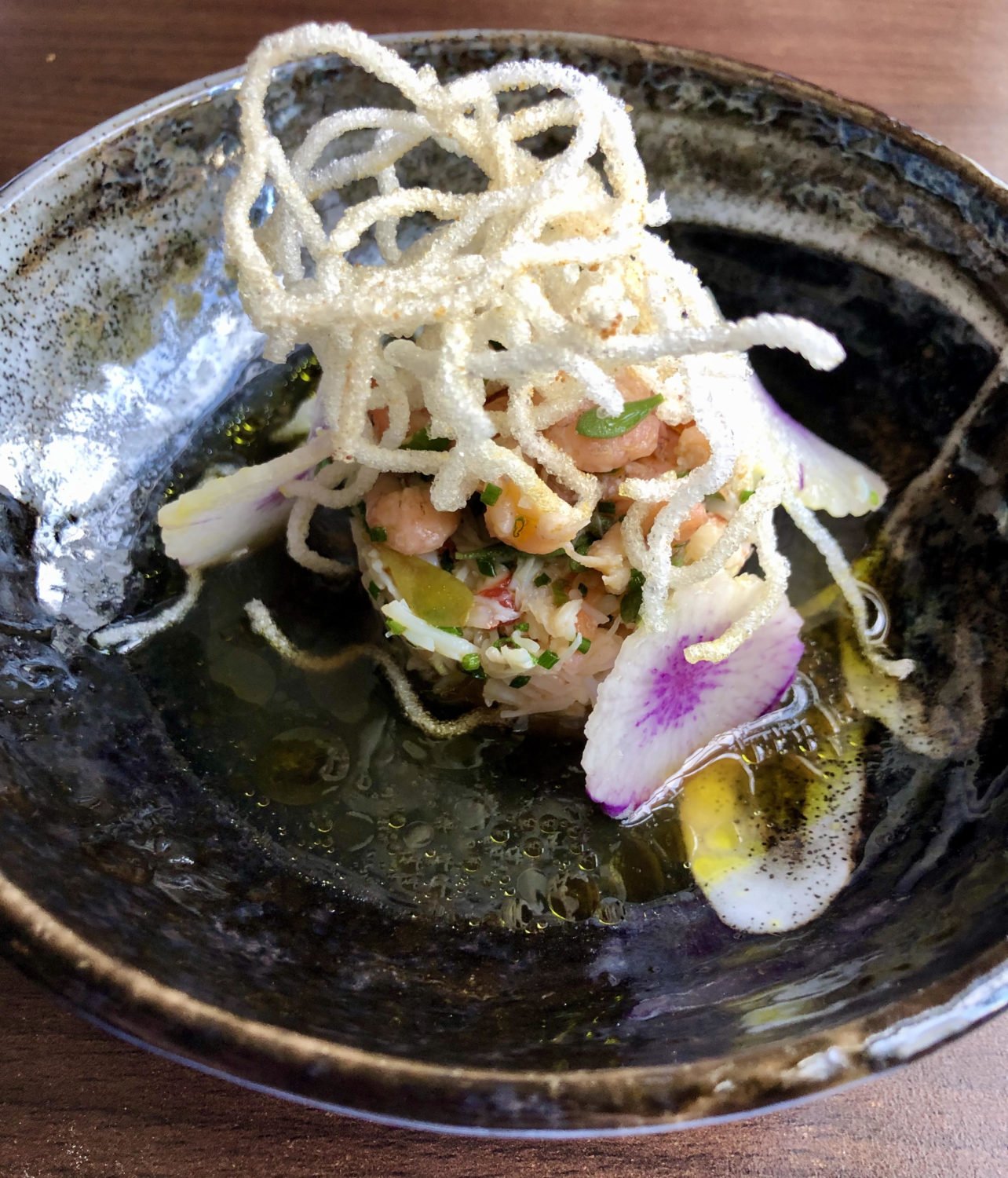 Moving on next to the Hay-baked Cotswold partridge; a richer plate of food packed full of delicious wintery flavours of glazed heritage carrots, pancetta with savoy and quince, with a buttermilk fried partridge leg served on the side. To balance everything out, a light dessert of Comice pear, made up of buttermilk, Scots pine and hazelnut was a refreshing first dessert, and it looked spectacular too! Finally our favourite of the two puddings was the rich black treacle sourdough tart, clotted cream, clementine and sea buckthorn. 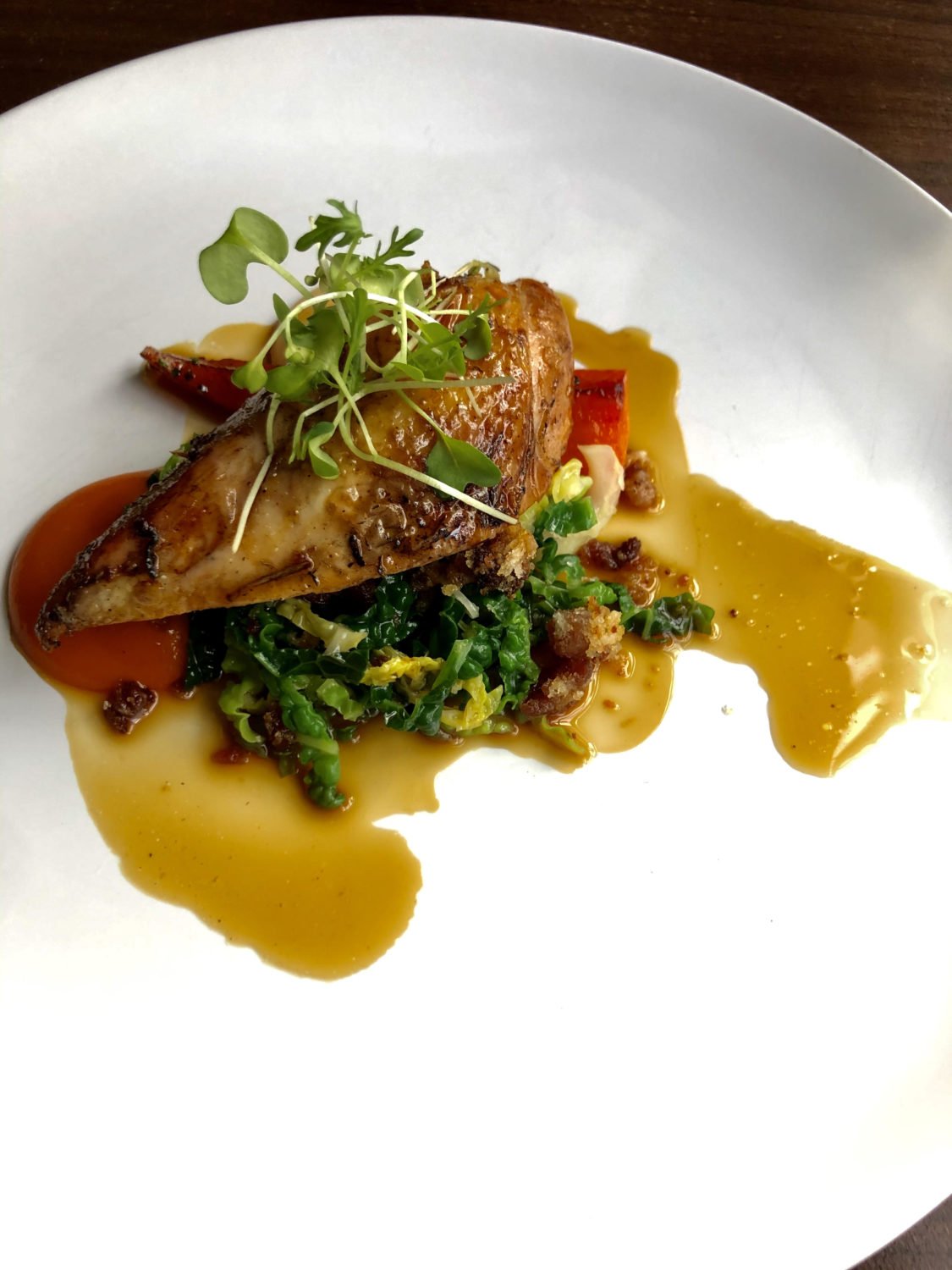 To finish we were offered coffee and handmade petit fours to send us dreamily off on to a cloud of happiness for the rest of the day. 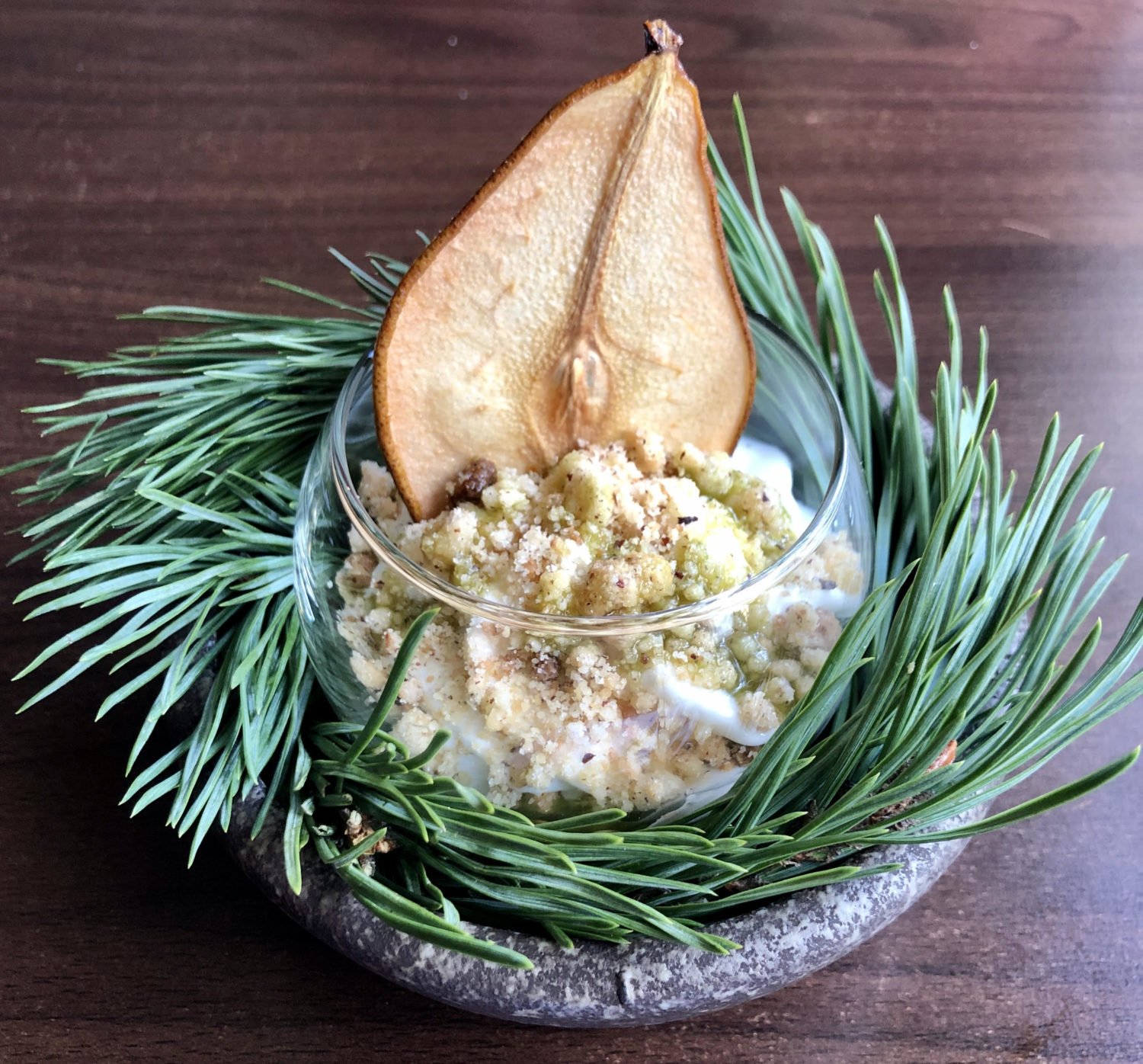 As well as the tasting menus which change every two months with the seasons, there is a choice of al a carte, an early supper and a light lunch menu. The restaurant is open from Tuesday to Saturday for lunch and dinner. 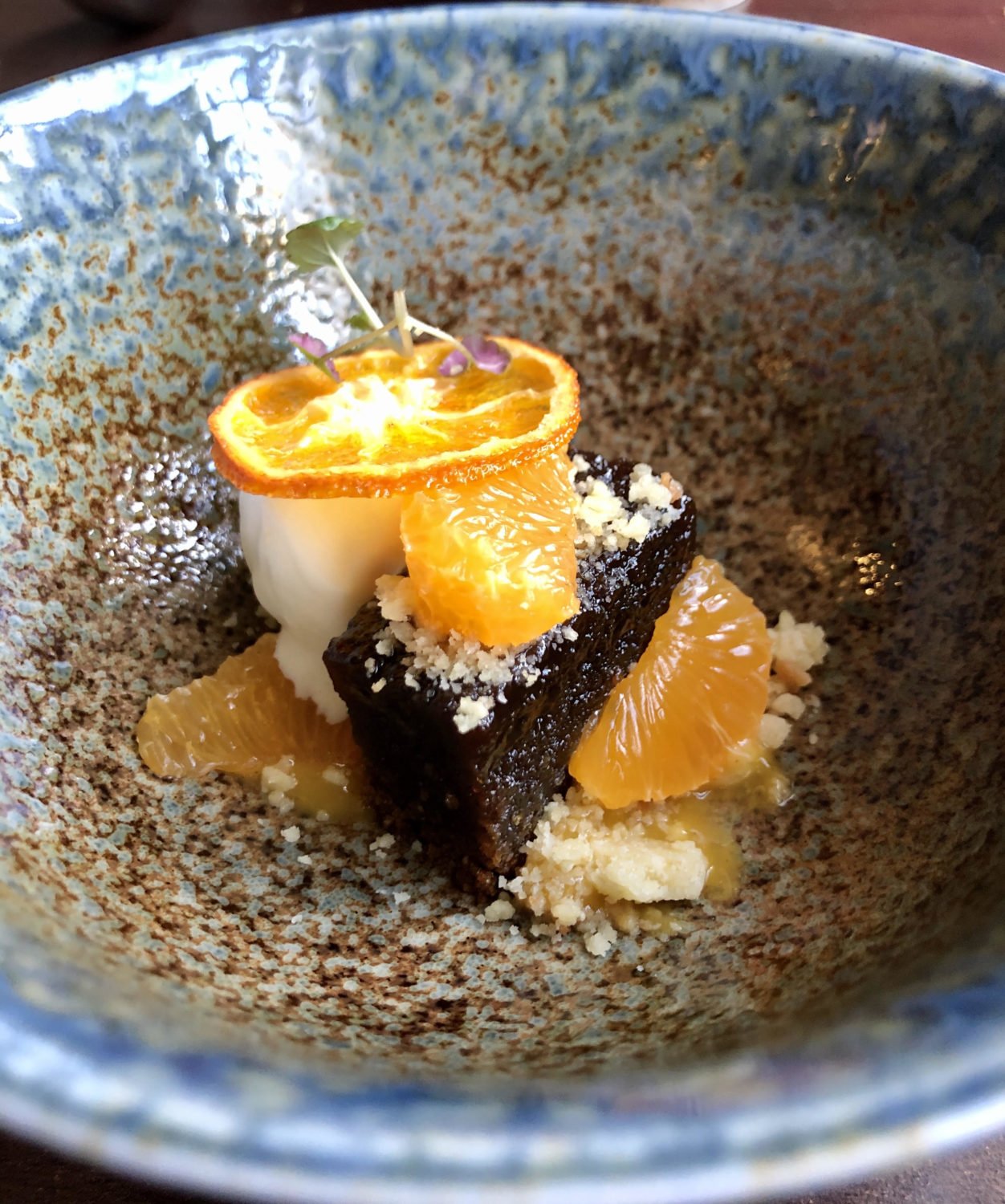 We first visited Purslane in 2016, and the very high standards of cooking we experienced back then have developed further to make this one of the most memorable and spectacular restaurants in the Cotswolds region.

*The Foodie Card® is only £15 per person per year (or £25 for two), and entitles you to exclusive offers and deals in participating food and drink places across The Three Counties. It’s the perfect gift for foodies!

*One offer per Cardholder per visit on presentation of the Card at a Participating Business, unless otherwise stated on the offer listing). 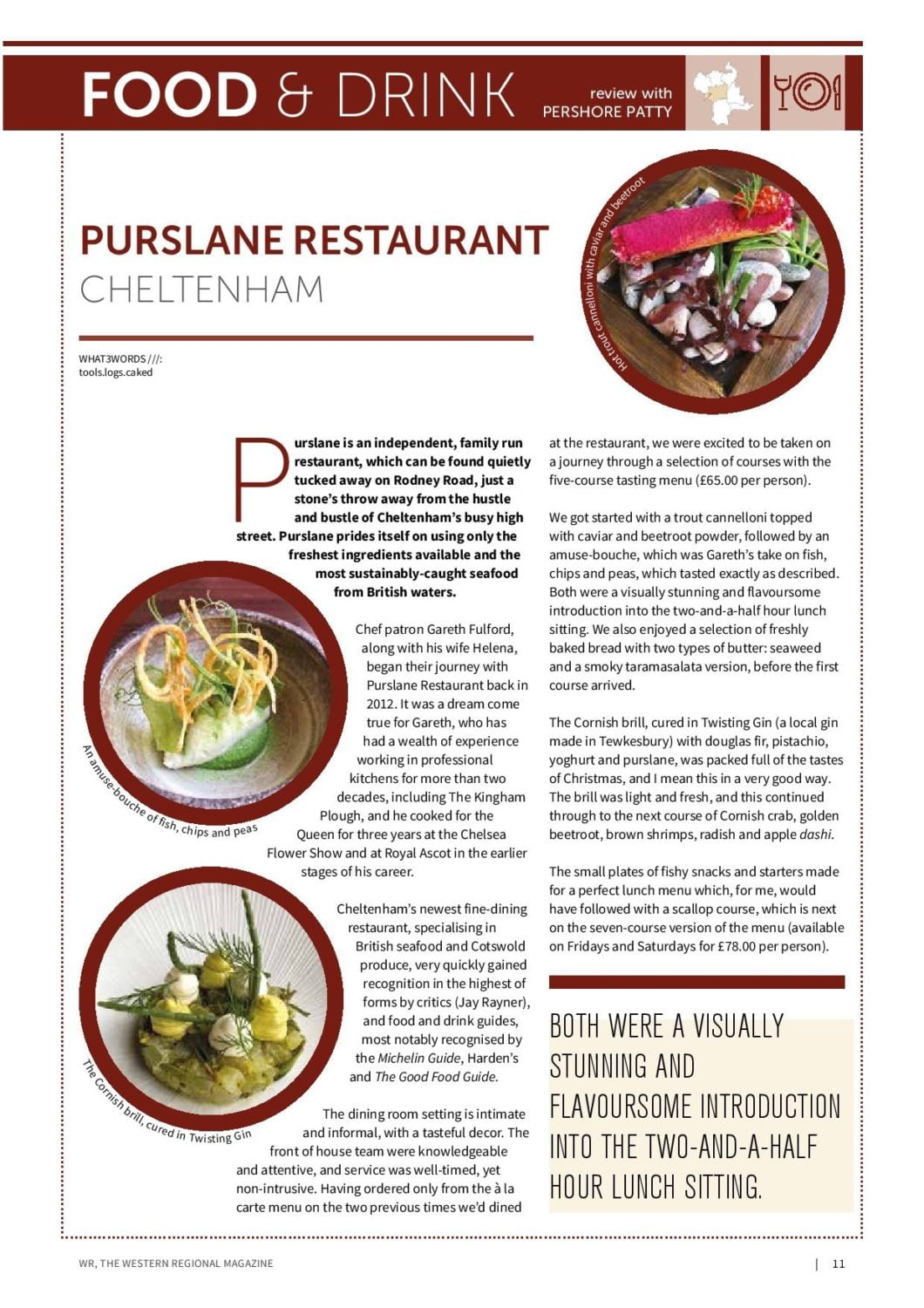 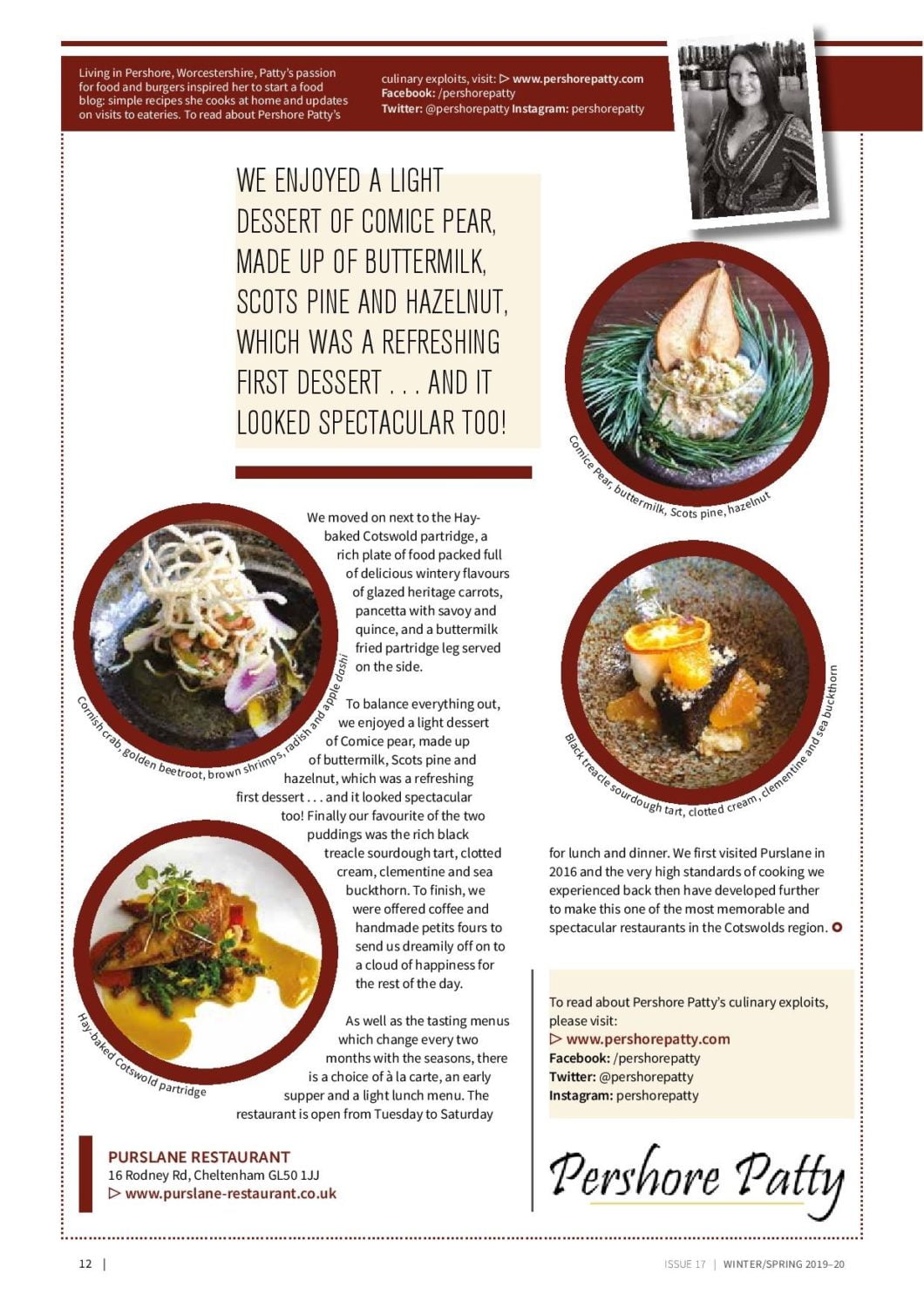