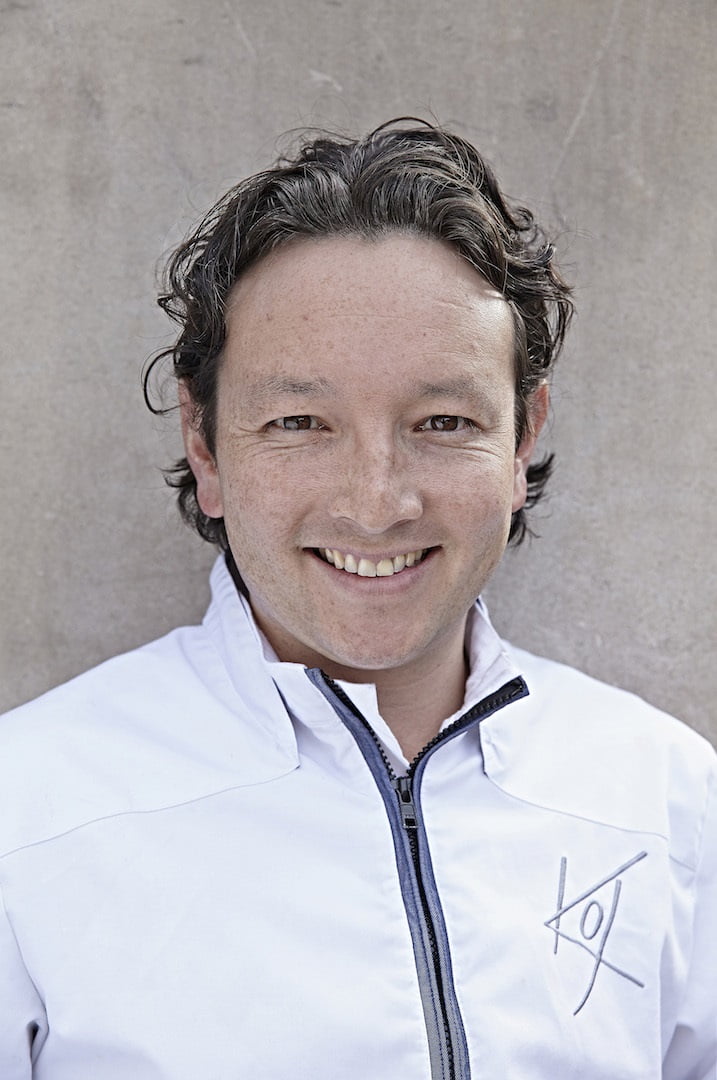 Tell me a little bit about how you came to own or work in your business.

I made it to the final of MasterChef 2012 (Amateurs) and set about gaining kitchen experience in London that year (full list is on my website). After moving to The Cotswolds, I set up as a freelance chef, mainly doing private jobs, combined with a bit of food writing and cookery teaching during the week. After about 3 years, I decided to start looking for premises to open a restaurant. I found a café in Cheltenham in 2016 and ran a pop up from October to December that year. As that came to an end, I secured the lease on the same property and we ran a Kickstarter campaign to help fund the refurbishment as a Japanese restaurant and cocktail bar. We opened officially in March 2017.

What achievements, awards or accolades are you proud of?

Reaching the final of MasterChef was what set me on my current path, but eventually committing to opening a restaurant was a big deal in itself, with the financial risk and a young family, and I’m often grateful that I’ve been able to achieve that in itself. Only five weeks after opening, Jay Rayner came in and The Observer contacted us a week later to say that he would like to write a review. I wouldn’t say we passed with flying colours, but it was broadly positive and had a huge impact at a time when we needed as much press as we could get. We soon made it into The Good Food Guide and Harden’s within our first 9 months and I was delighted to be listed in the Michelin Guide in October 2018. We’ve also won a brace of local awards including Cheltenham BID Restaurant of the Year and Cotswold Life Best Newcomer.

Any news announcements, or events that you’d like new and existing customers to be aware of?

The restaurant is ever evolving, adjusting to our capabilities and responding to feedback, so a lot has changed over time. Most recently, we decided to combine our lunch and dinner menus and offer one menu for both – hopefully that will be a popular decision. I’m also writing my first book this year, about opening the restaurant and Japanese food as they eat it in Japan (as opposed to what we think they eat based on Japanese restaurants here in the UK).

What makes your business unique?

Like many of the independent restaurants in Cheltenham, it is run by passionate people who love cooking and hospitality, but what makes it unique not just in Cheltenham but across the UK, is that sushi features no part on our menu and we are not afraid to cook dishes that are not on the menu of any Japanese restaurant in the UK. I just don’t see the point of opening an independent Japanese restaurant if you’re just going to copy the ‘crowd-pleasers’ you see in every other restaurants. We’re lucky in that few people cook Japanese food at home, so we’re usually able to offer something they can’t recreate easily at home. Necessarily, we have to use a lot of British and European fresh produce, but by combining them with imported Japanese ingredients we make them taste Japanese. The biggest compliment we’ve had is from a group of local Japanese expats, who say they always enjoy coming here because it reminds them of home.

Favourite restaurant to visit if you get a night off?

I still don’t have one! I’ve always liked trying new places. I have a few favourite haunts when I make it to London, but again, there’s so much temptation to try somewhere new. Sadly, living in a Cotswold village, I’m in the same position that many of our customers are: it costs almost as much in babysitters and taxis to have a night out at a restaurant, so when I do go out, it tends to be special occasion type places.

Last thing you watched on TV?

Which person in your life do you most admire and why?

Easy: my wife. She’s incredibly motivated and hard working, as well as a huge source of support and ideas.

What was the last gift you gave someone?

Well, I write this just after Christmas so there were a few, but my favourite was a frame that I gave to my wife containing a timeline of our life since our twenties, depicted in emojis.

What’s your favourite smell in the whole world?

What’s your favourite kind of sandwich?

Who would you want to cook your last meal on earth, and why?

Me, because I like cooking – but I’d want to share it with someone even if it wasn’t their last meal!!

What is the most annoying habit that other people have?

If you could eat only 3 foods for the rest of your life, what would they be?

What’s your claim to fame?

I’ve cooked for Her Majesty The Queen.

Which food & drink business (other than your own) do you wish you had created?

Wagamama. It recently sold for over £500 million, so they must be doing something right!

What is the best piece of advice you’ve ever received?

If you never try it, you’ll never know. If you don’t ask, you won’t get.

If you could be anywhere else right now, where would it be?

Eating in Japan or at home in bed.

What’s the best thing that happened to you last week?

It was a fairly mundane week last week, easing back into work after a break over Christmas and New Year. The only thing that comes to mind is my wife bringing me a cup of tea in bed on Sunday morning!

Name a product or service you love so much that you’d happily be that company’s spokesperson.

I love talking about Gloucester Rugby, especially with my Head Chef Robin, who is also a fan. Does that count?

As a child, what did you wish to become when you grew up?

I can’t remember. I wanted to become a chef aged 21, when I left university.

What is the perfect combination of pizza toppings?

Historically, I’d usually go for Quattro Staggione but since Fat Toni’s opened next door to us in 2017, their onion jam, has been a ‘life changer’.

What was the worst job you ever held and why?

Dabeull or Van Morrison, depending on my mood or what I’m doing.

What was the last thing you ate?

I just tested a new ramen dish that we’ve put on our new menu.

I don’t eat much meat at home, but if I was in a steak restaurant, I’d probably choose ribeye or a Tomahawk.

It used to be TripAdvisor. Like any new restaurateur I was almost obsessive about it and often hugely defensive. Now that I know that we please most of the people, most of the time, I have liberated myself from it. Now it’s probably our booking system, as we have to keep a constant eye on it to manage our work and handle customer requests.

What is the most impressive thing you know how to do?

It depends who I’m trying to impress! I can draw, I play several sports – I used to play hockey to a reasonably high level. I sewed my daughter’s teddy bear’s ear back on the other day – does that impress anyone? I wish I could play the piano and the drums. I like to think I can sing!

What do you hope never changes?

I hope we will always take pleasure in eating real, natural food.

Any finally a question from those who are married to you…When are you coming home?

Ha! I literally just received that text message! It’s midnight now. Once I’ve sent this back, I’m packing my bags and getting in the car. I’ll be back about 1 am. 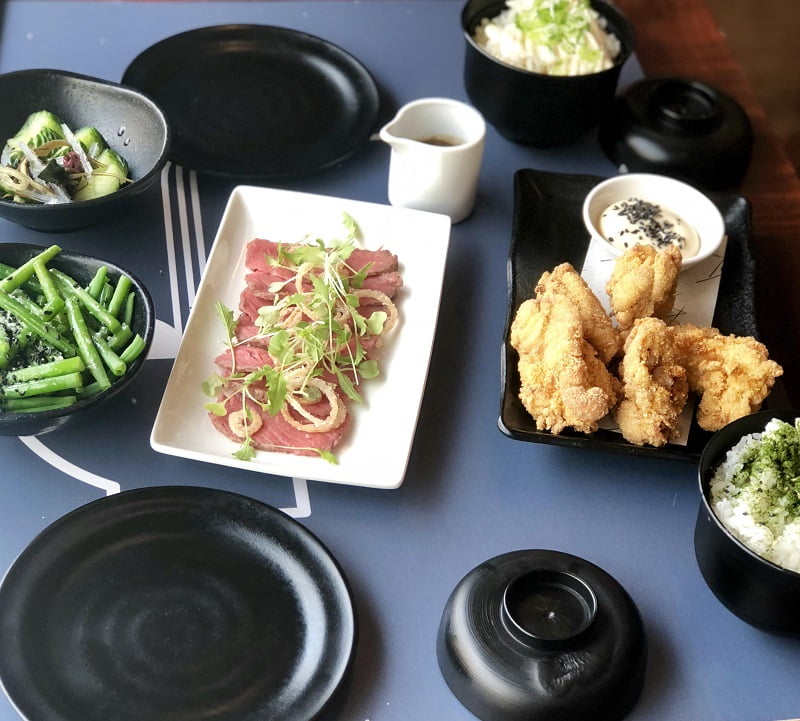 Founded by MasterChef finalist Andrew Kojima in 2017, Koj is a small plate Japanese street food restaurant, which uses the tagline #NOsushi to make the point that there is so much more to Japanese cuisine than raw fish!

Head upstairs to discover Koj’s own cocktail bar -Bandana Monkey, where you can expect to find a selection of Japanese craft beers, sake, shochu and whisky, as well as their own list of Japanese-inspired cocktails.

The Foodie Card offer – 10% off the food bill Tues-Thurs

The Foodie Card gives you access to offers at your local food & drink independents. Grab your card here for £15 (or two for £25) for year long savings whilst supporting local!