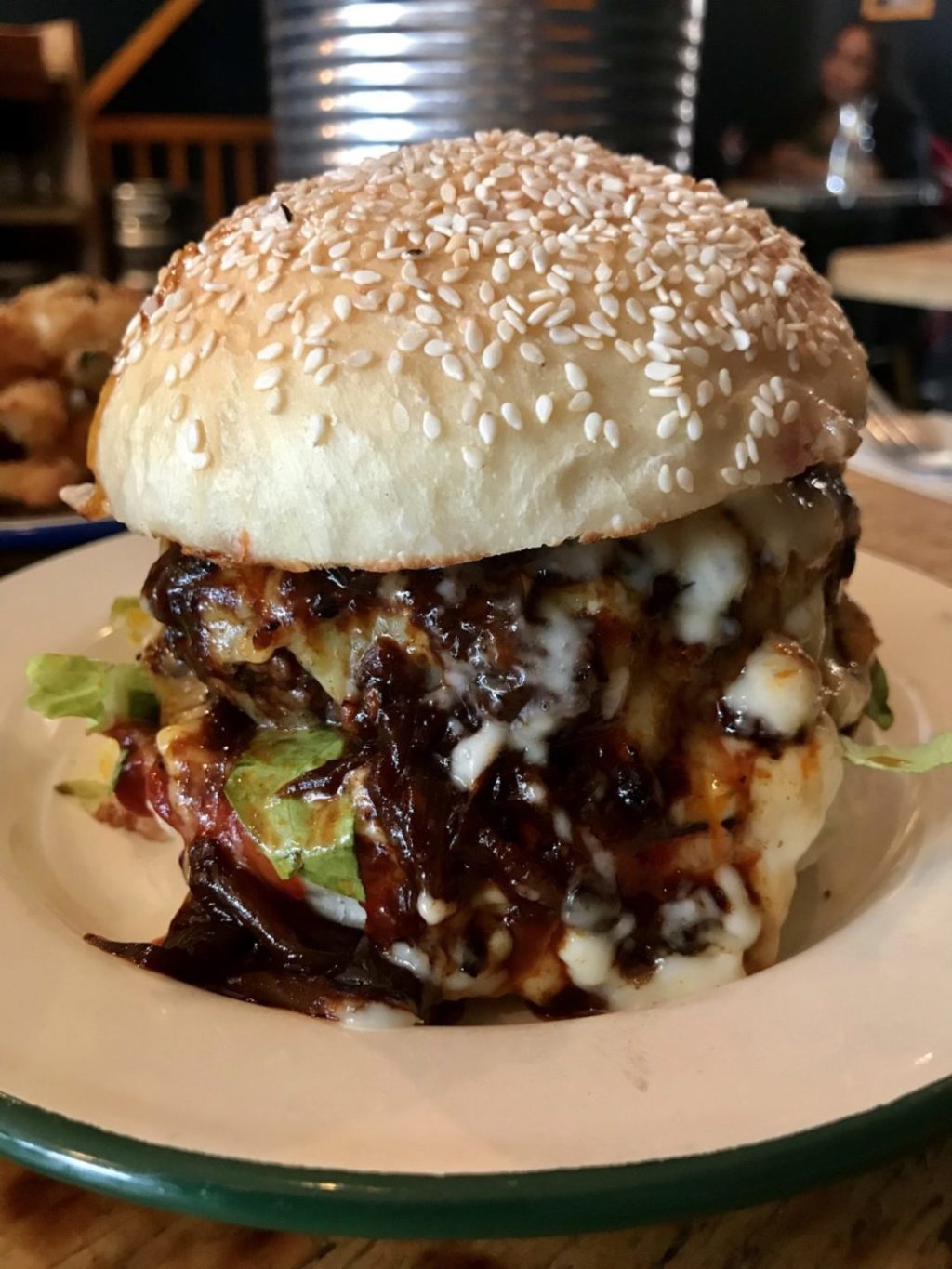 Lets be clear on one thing…I love burgers. It might sound like an easy task to cook and put together a good burger, but in fact it’s not. Well, it is, but so many restaurants even burger restaurants somehow get it so terribly wrong. I’ve eaten bloody loads of them and I like to think I know a good burger when I taste one. Last year I decided to eat my way through 8 of the best new burgers in Worcester (my home city), and BBC Midlands interviewed me about my quest to find the best burger. I think I may have found it, but that’s another story entirely. Whenever we visit somewhere away from home, we do our best to seek out the best burger places in the area. The last couple of times we were in Bristol we checked out Three Brothers Burgers and Burger Theory. As much as we enjoyed both, we felt that Bristol could do better.

Asado (meaning barbeque in Spanish), was a newcomer to the Bristol burger scene in 2017, and with it came some serious hype. 12 months on and (over social media at least) this burger restaurant still gets a big shout out as one of the ‘people’s’ favourites. According to Asado what makes them different is their carefully selected dry aged beef sourced from Higher Hacknell organic farm, cooked over a wood fired grill, using Southern American and British flavours. Although I am actually a fan of plastic American style cheese (don’t blame me, blame the parents as I lived in the US for a while as a child), Asado pride themselves on staying clear and instead using ‘high quality’, West Country produced cheese. It’s all down to the melt test for me…so let’s see.

I was determined not to order the wrong thing and miss out on the best example of what I’m led to understand is one of Bristol’s best burger restaurants, or THE best burger restaurant? I got in touch with Bristol’s burger queen, Natalie Brereton for some advice as ever as I knew she’d have my back. Nat recommended The Pollo Libra or El Don, but warned me that “basically, all of Lucien’s food is amazing”, oh and that “the new special looks banging”. The advice was invaluable and absolutely helped us come to a decision which ultimately turned out to be very wise indeed.

The previously mentioned ‘new and limited edition special’ was a chicken burger of epic proportions aka ‘Hot Pollo’ (£11). We weren’t put off by the heat, despite our waitress warning us it was pretty hot. We cut the free range Nashville style hot chicken burger in half and tackled a piece each. The chicken was beautifully succulent and tender, but still crispy on the outside and was deliciously hot hot hot. It was padded out with a hash brown, sweet dill pickles, lettuce and that West Country cheddar cheese, which in fact melts oh so well. A squidge of confit garlic mayo, natural ketchup, all wrapped up in a seeded challah bun, and there you have it. This was probably the best chicken burger I’ve ever eaten and we couldn’t have been happier with our choice.

A burger menu can’t be truly judged without trying the beef patty, so we went with the recommended ‘El Don’ (£9), which we were allowed to order slightly pink. Again slicing the mountainous burger in two, Mr R and I got stuck into our half burger and entered yet another state of burger heaven. The oak grilled dry aged organic patty was pressed in the slightly looser, crumbly on the edges way that I prefer hugely compared to tightly pressed burgers. It was juicy, cooked pink in the middle, but hot all the way through (for anyone with health & safety concerns), and had the grilled barbeque flavour we’d hoped to taste, which came through even with all of the flavoursome toppings. The pancetta BBQ onions were something new to us and completely out of this world delicious. More of that delicious West Country cheese, confit garlic mayo and natural ketchup added sweetness and sharpness, with crunch from the tomato and lettuce. I love a brioche bun as much as the next person, but it was a welcomed change for both burgers to be encased in a soft, challah bun topped with a great seeded crumb. 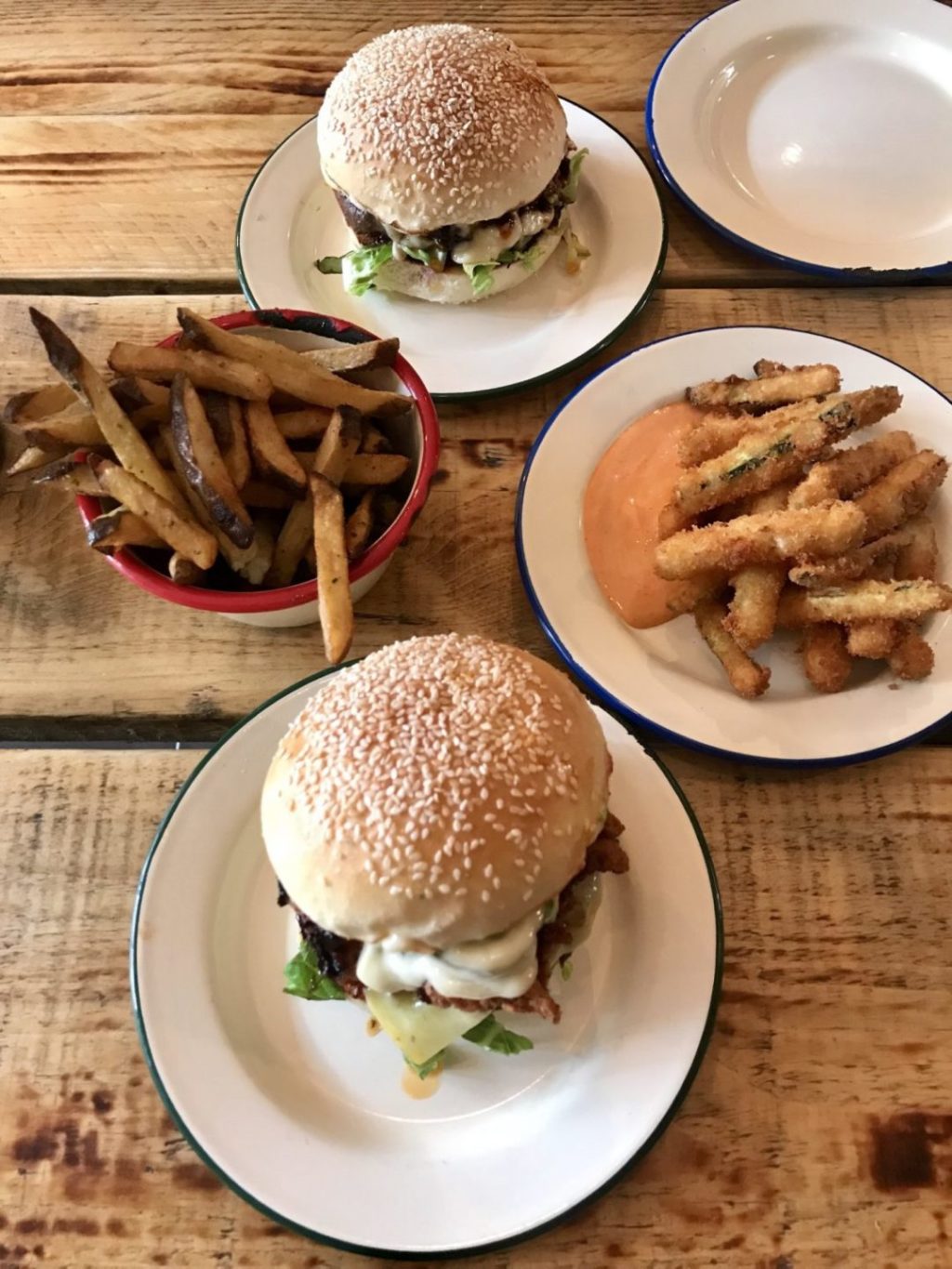 All that’s left to mention are the sides we chose to go with our insanely good burgers. The rosemary salt chips (£3), double fried locally grown chips seasoned with rosemary salt were very good and exactly what they said on the tin – no frozen chips / fries here. Courgette fritters (£5), we struggled to finish as the portion seemed generous along with the huge burgers, but we loved the crispy panko fried coating and the spicy lime mayo was inspired too. Next time we’re in Bristol looking for a burger restaurant I’d struggle to be convinced that we’d find a better one than Asado. If you think I’m wrong then please let me know! Special thanks again to Natalie Brereton for basically choosing my dinner for me – I couldn’t have done it without you x