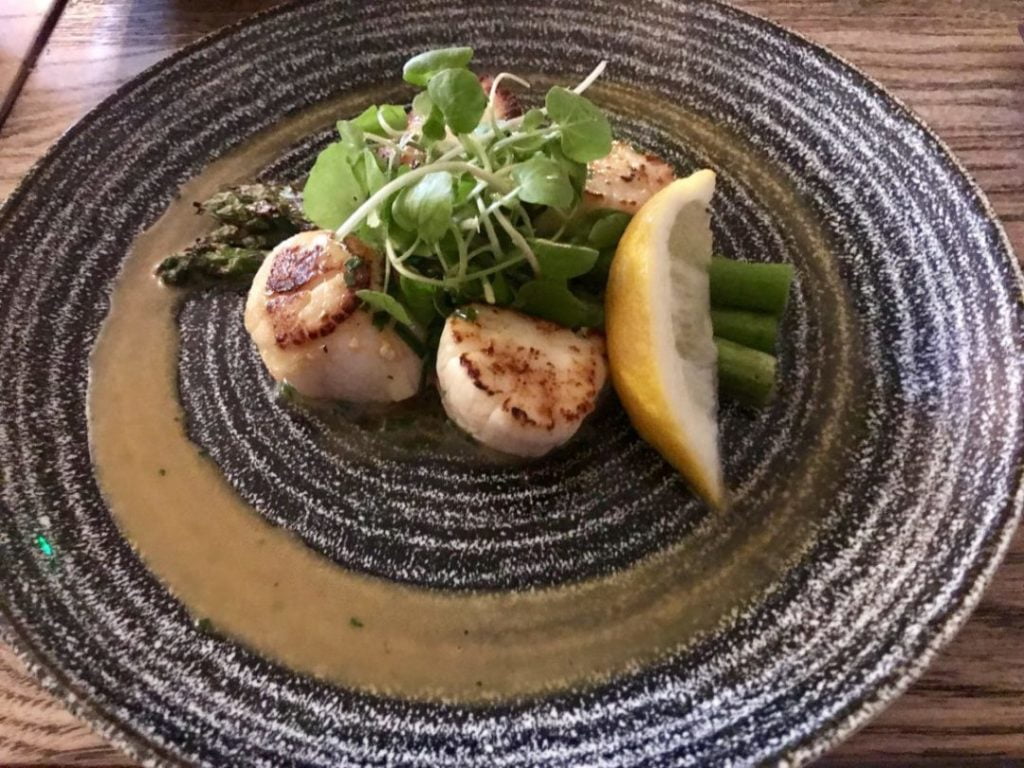 A pub that has a reputation for serving one of the best Sunday roasts in Worcester with views over Diglis Basin Marina, is a pub that one simply must give a try. When we received an invite to sample the new spring menu at The Anchor Inn & Boathouse, we booked a table on a busy Saturday night and had high hopes for the evening. The menu sounded good when we viewed it online, but we hadn’t realised until we arrived that on the weekends The Anchor also offers a specials menu with an emphasis on fish and seafood.

We were seated in the main restaurant after ordering a drink first in the bar. Early diners with children were finishing their meals and there was a relaxed, friendly vibe to the place. Our waitress Bryony was super helpful from the start and was happy to give recommendations when we struggled to choose, as she had a good knowledge of the menu as well as having tried various dishes herself. 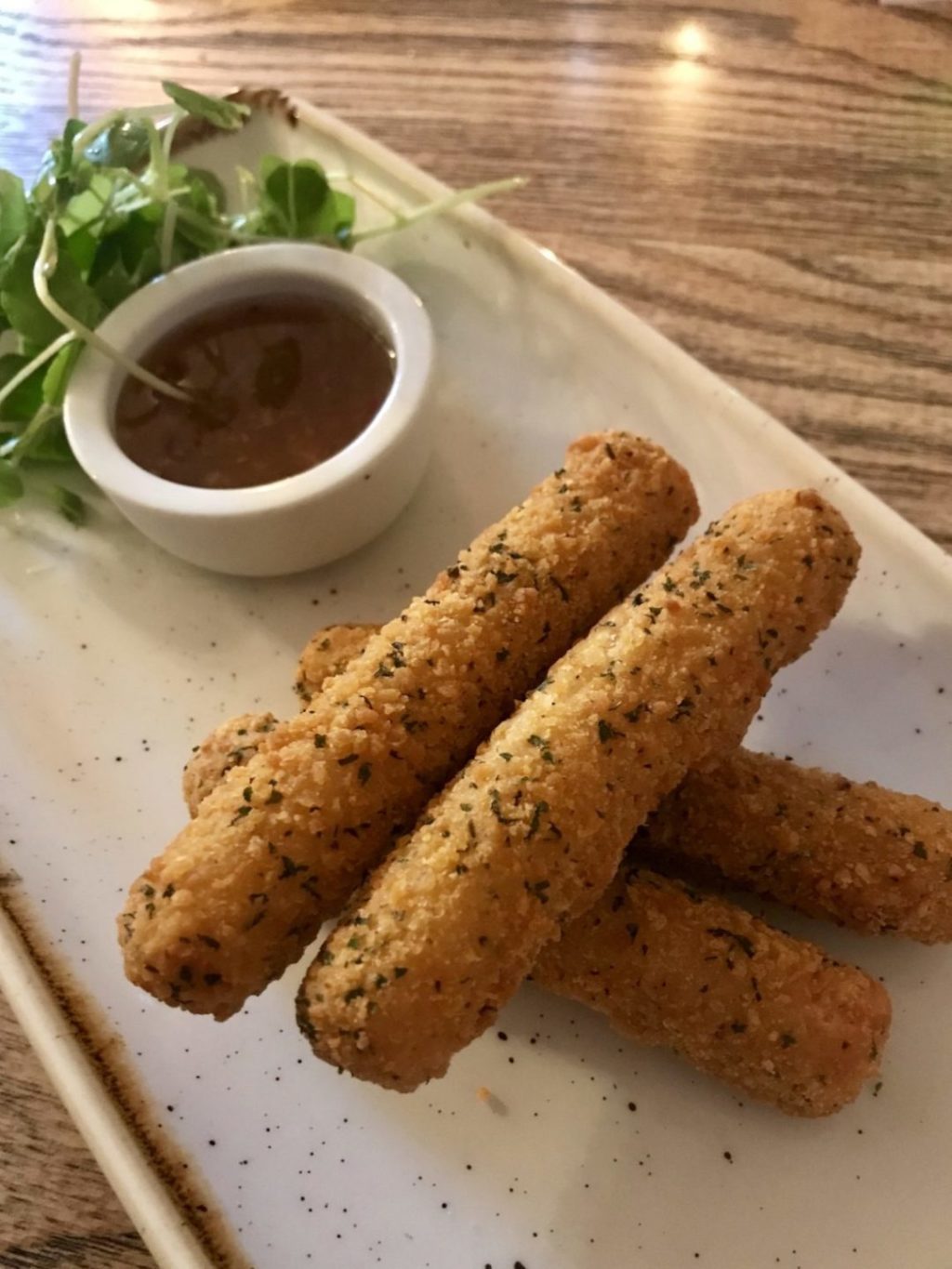 Call us greedy, but when we see mozzarella sticks anywhere then we just have to have them. They are amongst a choice of 6 bar snacks (£4.50) ideal for sharing with drinks in the bar or outside. Thankfully we had eaten very little and I had been on my feet all day so had worked up quite an appetite and I needed them! We were firstly presented with some olives and brioche bread to nibble on – another thing that’s impossible to resist. A chilli dipping sauce accompanied the mozzarella sticks, which frankly we had a bit of a crush on. There was something about the texture of the hot cheese inside that seemed like no other, and we feared that they could get quite addictive. I considered enquiring about who they buy them in from, but realised that would inevitably have ruined any chance of me squeezing into my wedding dress in 3 months time.

A much healthier starter choice for the both of us had been ordered from the specials. Both serving sizes were unexpectedly large and in hindsight we probably should have ordered something to share. Mr R went with the mussels in a white wine, cream and garlic sauce (£8.50). The mussels couldn’t have been much fresher and the homemade sauce was delicious. The dish was faultless, as were the Beesands scallops, with local asparagus (£10) that I’d chosen also from the specials. 4 enormous, meaty scallops had been seared leaving a beautiful caramelised glaze. They had been cooked perfectly as were the chargrilled asparagus spears that sat in between them. A simple, light lemon butter perfected the plate, which had been a joy to eat.

To follow and with the help from consulting with Bryony I decided upon the Mum’s fish pie (£13), which our waitress told us was on par with her own Mum’s fish pie. How could I resist giving that a try? The pie was huge and I would have said it was easily enough to share between 3 or more people. I did feel a little intimidated by its size, but once I poked my fork inside I realised that the Thermidor sauce was much lighter than the rich creamy pies that are often served in pubs and restaurants. It was still huge, but instead of being filled with lots of mash, the pie was mostly made up of big pieces of salmon, haddock, prawns and spinach. I even found a couple of scallops hiding in there – I’d delved into a fish frenzy. The pie was topped with a moreish cheesy mash and I can honestly say this was one of the best fish pies I’ve ever eaten in my life. I probably shouldn’t admit this, but the truth is I ate the whole damn lot!

The Medallions of beef (£21) next to me on Mr R’s plate looked amazing. Another incredibly tasty sauce made with brandy and Dijon mustard was just so good. The beef had been cooked exactly as desired and came with a big slab of creamy, dauphinoise potatoes which were also spot on. Sautéed tiger prawns with more of that superb asparagus filled the plate and the whole thing came together wonderfully. We agreed to share a dessert to see it through and because we just couldn’t resist the sound of peanut butter ice cream. The Warm chocolate brownie (£5) is a chocolate lover’s heaven. It came topped with large toasted marshmallows that started to melt on the outside into the gooey, sweet chocolate. Thick pieces of honeycomb sat underneath the peanut butter ice cream – this dessert has it all.

I hadn’t eaten all day, but if I had then the portions may have defeated me. We thought the food was exceptionally good value for money, but maybe just a bit bigger than they needed to be. Although having said that, the food is so good you can’t stop eating it, full or not. You may be thinking, well we didn’t pay for it anyway, and on this occasion we didn’t. We did however call the next morning and booked a table for 6 of us to go back the following Saturday evening. As with the Saturday before the food was every bit as good as it had been previously, and we took the opportunity to get another mozzarella stick fix.

The Anchor Inn is owned by husband and wife Nic and Kathryn Walsh Gibbons. Kathryn was front of house during both of our visits so we took the opportunity to have a chat to her. She told us that Nic is in the kitchen and his speciality is cooking fish freshly sourced from Beesands in Devon, and we couldn’t agree more. The meat from The Butcheress is also top notch and we loved seeing seasonal and local ingredients such as the Evesham asparagus featured on the specials. In the summer it’s essential to get down to The Anchor’s beer garden as they serve gourmet burgers, stone baked artisan pizzas, fresh seafood and fish and chips from the Boathouse kitchen. Every week night it’s 2 for 1 on pizzas, burgers, fish & chips or bangers & mash depending on which day you visit. The Anchor Inn is such a great find for us, and will now be one of our favourite places to meet friends with kids, and we may even treat the dog to a night out as The Anchor welcomes all.

Worcester, Worcestershire, United Kingdom – last visited in April and May 2018

*Although our food and drinks were complimentary on our first visit, as ever my words and photos are my own. Thank you again to Nic, Kathryn and Bryony at The Anchor Inn & Boathouse for hosting us and making us feel very welcome.