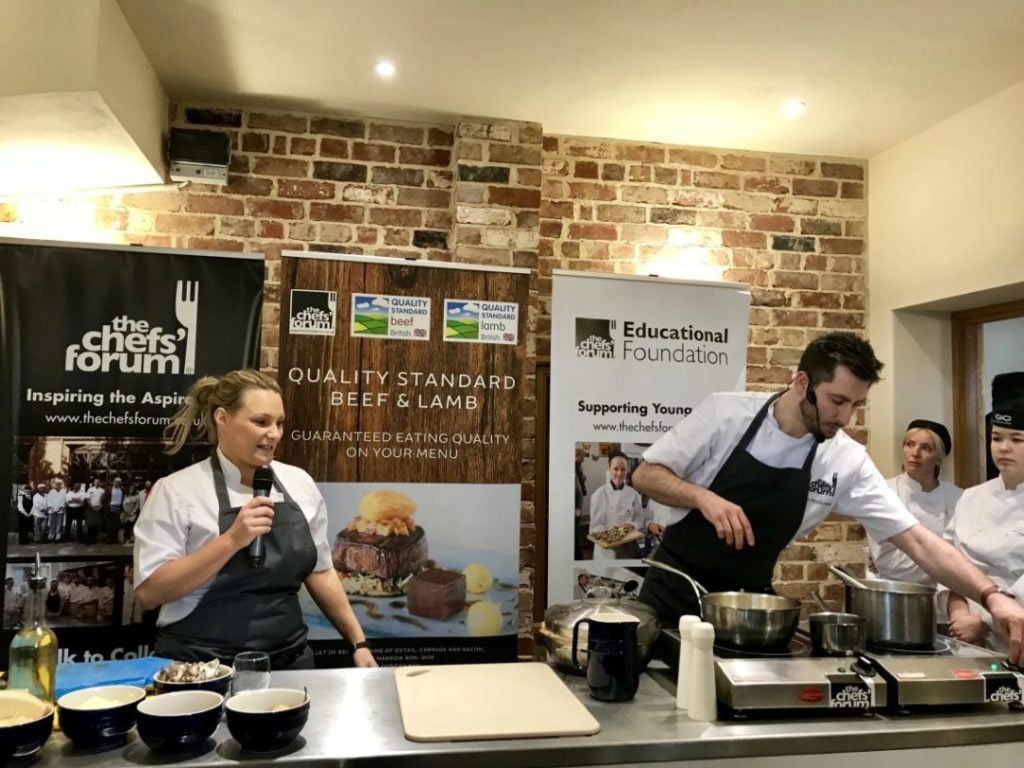 This is a week I’ve been very much looking forward to as it’s all about food! Monday kicked off with an exciting afternoon at my favourite local restaurant / hotel Eckington Manor, where the latest Chefs’ Forum event would take place. It just so happens to also be where my wedding breakfast is to be held in 4 months time, almost to the day. Thankfully for what seemed to be the first time this year, the sun was shining and it was set to be a glorious day.

The Chef’s Forum is in its 10th year of bringing top chefs together with local catering colleges to showcase some of the best talent in the industry. The forum is made up of chefs who have been recognised with the highest of accolades in the industry, and it was an incredible privilege to have the rare opportunity to spend an afternoon amongst Midlands-based chefs and hospitality professionals alike. Although not a chef myself, I have a huge respect for the work that goes into creating the food that I have such a passion for eating. Going behind the scenes in the kitchen at Le Champignon Sauvage last year gave me a huge insight into what it’s really like to work in one of the top restaurant kitchens in the country, and I hoped to get some further inside knowledge by attending this event.

One of the first things I noticed when we arrived was the big black van outside playing rock music – I was told this was the ‘spice truck’. As I stepped inside I noticed everything was white. Greeted by Katlin, she asked me if I cook and did I know where my spices came from. At first I wasn’t really sure what she was talking about, but then she explained further about her work with Michelin trained and other top level chefs, and how ‘the spice truck’ is all about educating chefs to care about and know their spices. I learnt in the few minutes of chatting to Katlin that many of the chefs they meet talk about how they carefully source meat, fish and produce and know its provenance, but for some reason 90 something percent answered that they didn’t know where their spices came from. So why go to the trouble of using the best of the best ingredients to then flavour the food with a spice they know nothing about? It certainly got me thinking. 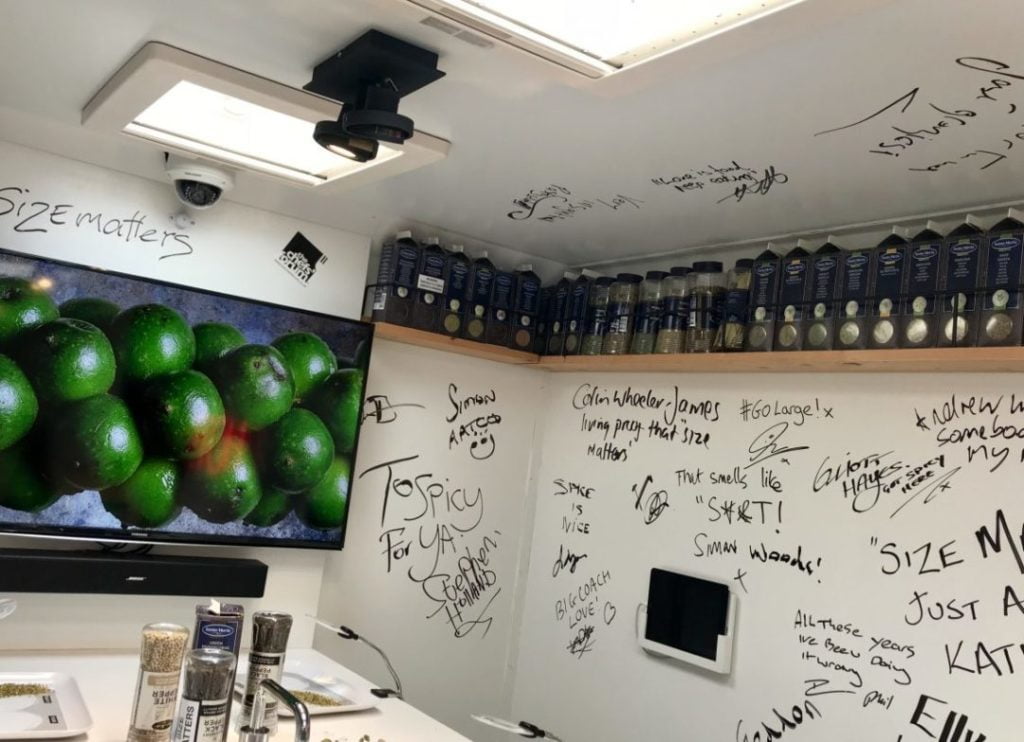 Apparently all of the writing and signatures that are written on the inside walls of ‘the spice truck’ are of the chefs who have worked with Santa Maria and have gone on to use their herbs and spices. Katlin gave me a pot of the vanilla sugar to take home and sample, which she said she uses in place of sugar on just about anything. 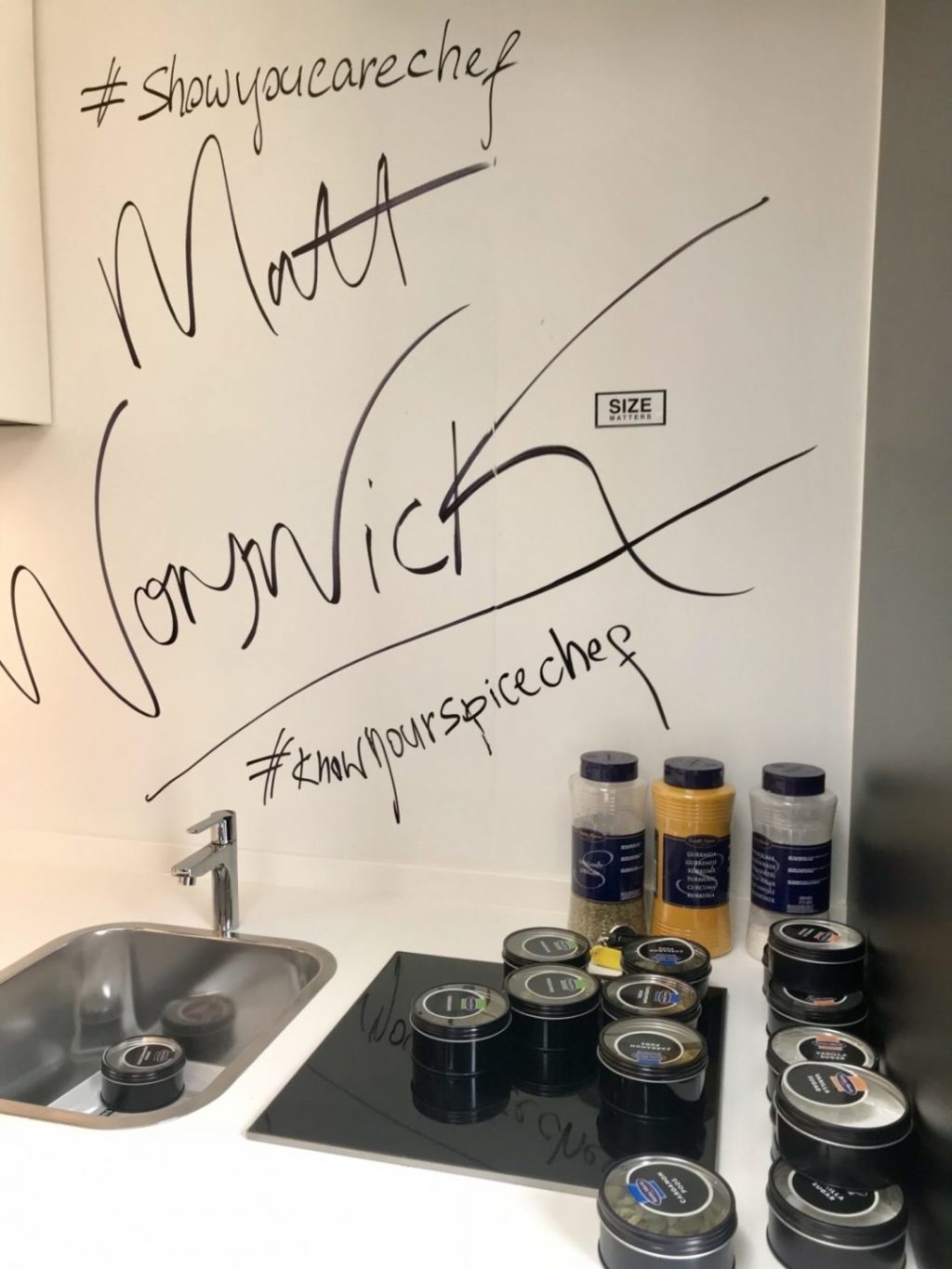 Having been fortunate enough to have sampled canapes at Eckington Manor many times previously, I was very happy to see some familiar faces as well as students from HIT Training and Gloucestershire College handing out freshly made treats for the delegates to enjoy along with a glass of fizz. I started with the asparagus with truffle mayonnaise, and decided to politely wait until the next serving came out before trying another of the other bite sized goodies on offer. The spicy pork fritter and blue cheese & walnut canapes were every bit as delicious as the times I’d tried them before, but my favourite was the beef tartare & beer tapicoa.

Back inside there was a mini trade show made up of top national and local suppliers showcasing their produce, products and services. This was also an opportunity for some time for a bit of networking and for the chefs to meet other members of the forum, before gathering around for the first cooking demonstration. Eckington Manor’s kitchen is headed up by Mark Stinchcombe – you may recall him winning Masterchef: The Professionals in 2015. Mark’s wife Sue (also a chef at Eckington Manor) has been taking some time out of the kitchen recently after having their first baby. We were lucky enough to see the husband and wife team cooking together and serving up one of their delicious venison dishes from the restaurant menu.

The crowd enjoyed the light hearted banter between Mark and Sue and their admiral skills and ability to entertain an audience of the talented chefs in front of them. The pair laughed their way through after setting the smoke alarm off during the cooking of the venison, and plated up a stunning dish, making the whole demonstration seem effortless. Afterwards some people stayed behind to sample Mark and Sue’s creation, while the rest of the group then moved outside for the next part of the agenda.

Outside in the courtyard a huge piece of raw beef stood proudly on a thick wooden meat board as the crowd watched and waited to see what was next. Butcher, Jack Cook, took the centre stage to talk about butchery as he began crafting the meat into various cuts of steak using a large knife and hacksaw. He made this look so easy as he talked and carved, as well as encouraging the chefs to ask questions as he went along. Walter Rose & Son are a traditional butchers based in Wiltshire, and thankfully not too far away as although they supply their meat to the country’s top chefs (such as Tom Kerridge) and restaurants, they also take smaller orders online, which I for one will definitely be doing.

Next to Jack was an intriguing piece of equipment that I’d spotted earlier in the afternoon made by Synergy Grill. Claire Mansfield was on the grill and she was there to demonstrate how much more quickly food cooks and how better it tastes when cooked on a Synergy Grill. Jack had also brought with him some of his pork sausages, pork steaks and hog burgers for Claire to grill, and to serve up for what was for most of us the first BBQ of the year. I tried a piece of each and I don’t know if it was the meat, the grill or a combination of the two, but that was some of the most moist and succulent meat I’ve ever tasted from a grill. Each piece had an outer chargrilled flavour, but inside it was as if it had been roasted, as the meat retained its juices so well. All I need now is an industrial kitchen to put one in…still working on that.

After lunch the chefs were gathered at the roadside by wild food expert David Harrison for a little adventure. David is based in Torquay and also happens to be Michelin-starred chef Simon Hulstone’s personal forager at The Elephant Restaurant. When he’s not foraging for Simon, David also teaches bushcraft survival as well as foraging to groups and on a one-to-one basis. Despite being a huge fan of the great outdoors, enjoying cooking and loving dining in restaurants, foraging is something I know very little about. David explained that he wasn’t going to hold a foraging class today due to the group being so large and being on a time schedule, but the session was more to try and spark an interest with those who might decide to learn a little more at a later date.

We mainly stuck to hedgerows and the roadside, but instantly I was surprised when David started picking what looked to me like weeds out of the ground and saying they were edible. Conversely he was also picking others that he was describing as poisonous and highly inedible. His point being that you absolutely need to be 100 percent sure about what you have picked before you try to eat it or cook with it. David offered advice on ways to verify your plants and quizzed the group on what they recognised as well as allowing us all to try a few as we went along. My small taste of foraging didn’t spark enough of an interest for me to want to book onto a course anytime soon, but for the chefs it certainly provoked some food for thought.

Back at the Manor and the afternoon concluded with more cakes and macaroons made and served by Mark and the students. We were also given goody bags to take away, filled with brochures and leaflets from all of the stand-holders from the day’s event. I was also delighted to find a bag of Chatos Moscatel raisins on the vine which had been dried as we’d sampled some earlier paired with some Manchego cheese – the perfect combination. I discovered the full sized jar of Santa Maria cacao & chili spice in the bag when I got home, which I rubbed on our steak that night for dinner. The spices tasted fantastic, but my steak wasn’t a patch on the Walter Rose & Son’s I’d tasted just a few hours earlier. 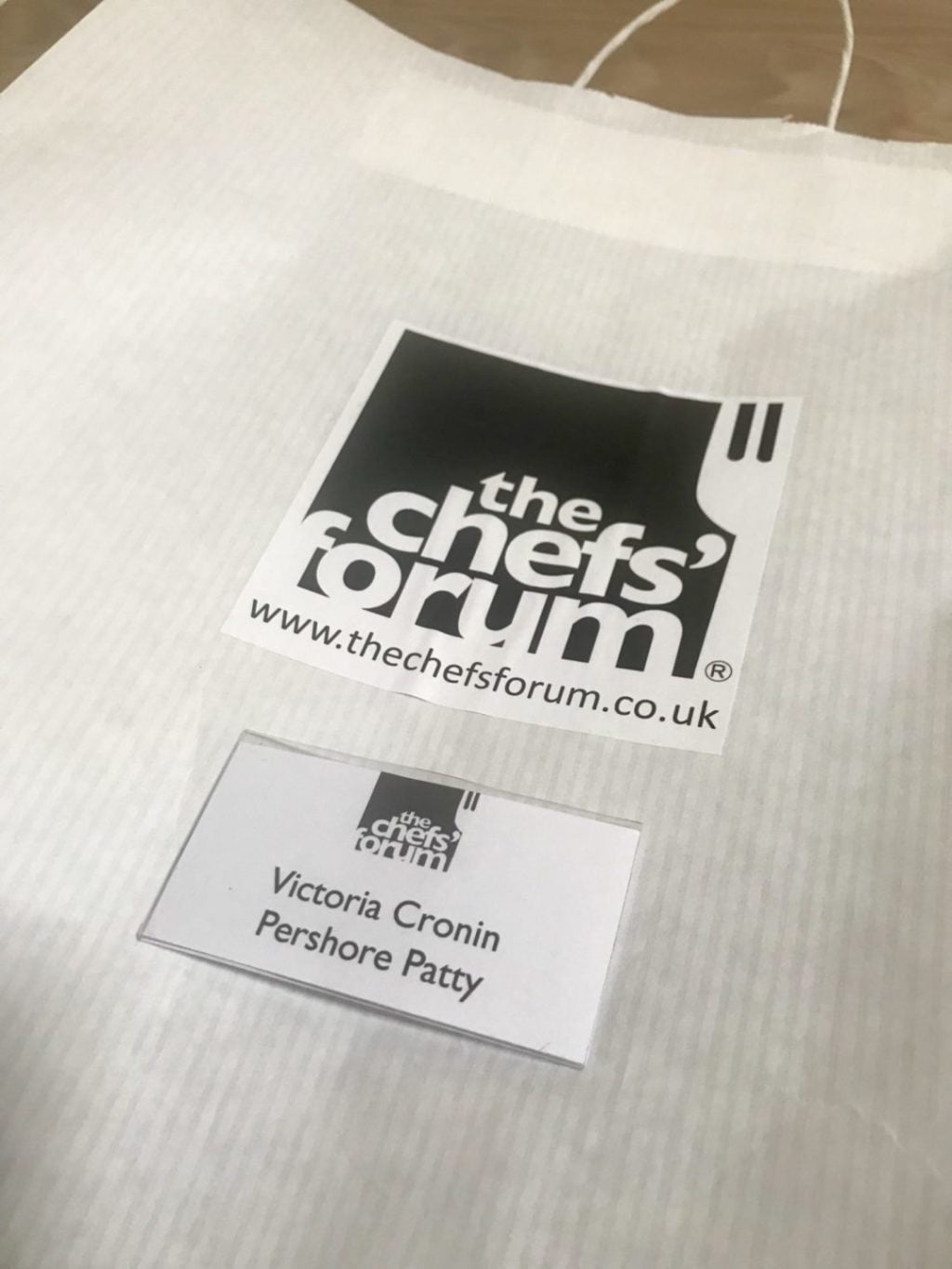 Although free of charge, The Chef’s Forum event held at Eckington Manor was by invitation only. A huge thank you to Rebecca, Alexandra and Catherine for allowing me the opportunity to attend the forum – April 2018.