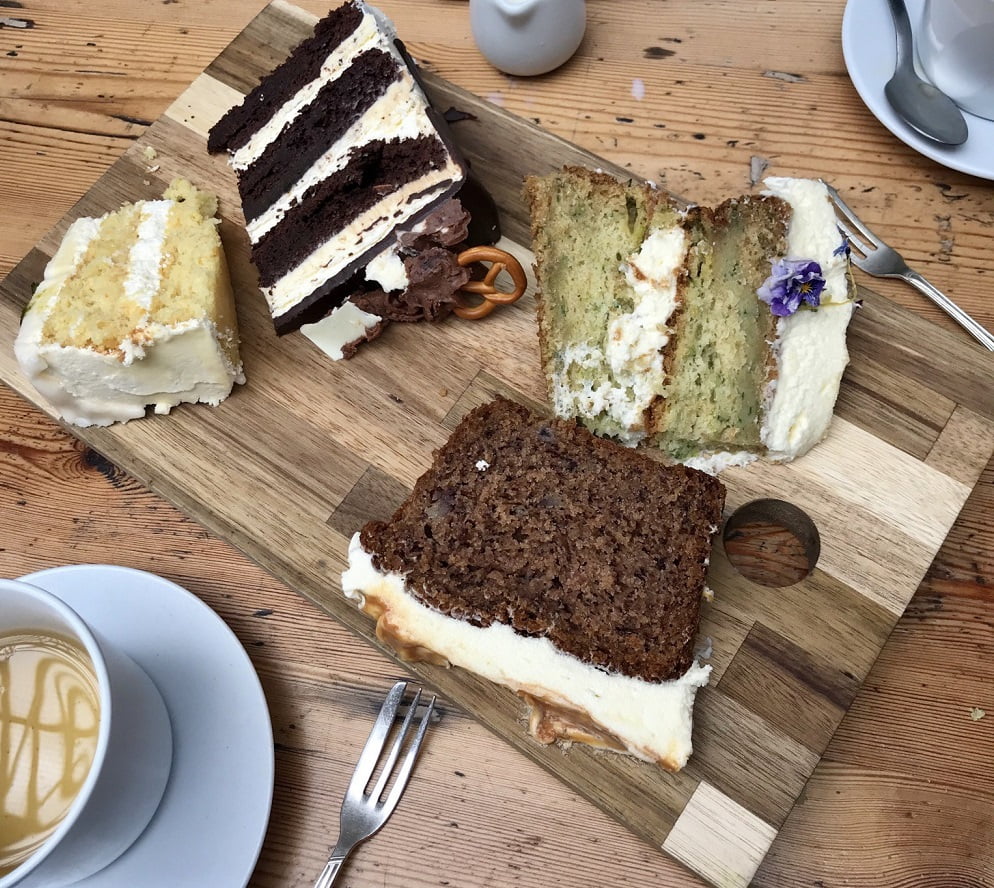 2018 is the year we are getting married, and although we haven’t stuck to traditions with every detail, one thing for sure is that we’ll be having a cake. Back when we didn’t even have a theme set for the big day, I spotted the cake that I wanted and had to have whilst scrolling through Instagram. Bakers Ahh Toots are located on a stall in St Nicholas Market in Bristol just off Corn Street. With a consultation booked we headed down to Bristol for a tasting before calling in for a pizza at Pi Shop. We sort of picked the flavours we liked there and then, but there was another choice suggested by Emily at Ahh Toots which meant ideally we’d need to go back to try them. As luck would have it we had a great reason to return to Bristol when we booked some tickets to see a live band just a few months later.

After dumping our bags at the hotel conveniently located opposite to St Nicholas Market, the first thing we did was go on a scout for some lunch. There’s an abundance of incredible food places in Bristol, but living in the middle of the countryside street food isn’t something that we get to indulge in too often. I’d remembered from our previous visit seeing people queue for what seemed like the entire length of the market to get their hands on a Kurdish naan bread from the Matina stall. Apparently when they are really busy the line does go down quickly and it is worth the short wait. The homemade Turkish wraps are deep filled with a choice of lamb, chicken or halloumi and come complete with freshly made salads, hummus and sauces. I went with the halloumi filling and I was amazed at how enormous the wrap was. Even for someone with an appetite the size of mine it was a struggle to eat the whole thing, but I eventually did. Mr R’s marinated chargrilled chicken was a big hit too, and we thought they were incredibly good value at just £5 each!

Dinner had been booked that evening at Burger Theory around the corner (no diets here), so a mooch around the old city was on the cards for the rest of the afternoon. Before leaving the next day we returned to St Nicholas Market to collect our cake from Ahh Toots. All of their sweet and savoury treats are made onsite in the tiny kitchen, including the bespoke cakes which are often decorated in plain view of passers-by. There’s even a café outside the front of the shop – perfect for a pit stop whilst soaking up the atmosphere. The market has been trading since 1743 and according to the website was voted Britain’s Best Large Indoor Market in 2016, by the National Association of British Market Authorities. There are three sections to explore, all packed full with independent retailers and stalls offering a range of unique finds.

Having a lunch appointment already arranged with Pasta Loco on the way home, we resisted the temptation of buying anything from the food stalls to eat whilst we browsed. As we’d skipped breakfast this was harder than it seemed with so much to entice us, so a takeaway had to be the compromise. Pieminister is a brand I’m hugely aware of as an avid follower of some of Birmingham’s best food blogs, where one of their 6 restaurants is located. I read a review by Bite Your Brum, describing her visit as the best hangover she’d had in a while. With a statement like that how could I resist giving the pie a try? £12 bought us a choice of 3 pies, so we went with the fungi chicken, Heidi and Mexicow. The takeaway boxes give information on how to cook them at home, so we headed to the M&S in the town centre to pick up ingredients for our obligatory mushy peas and mashed potato.

The cake was safely put away in the fridge when we got home and was scoffed the next day. The pies on the other hand came out that evening. I found a recipe for minty mushy peas on the allrecipes website, as weirdly I’d never made them before. Potatoes got boiled and mashed up with a little help from Mr R whilst the pies did their thing in the oven for 25 minutes. The pastry had crisped really well on the outside and tasted fresh considering it had been heated up at home. The fillings in all 3 pies were plentiful and delicious. Don’t ask me which my favourite was as I enjoyed sampling each of them equally. Mr R would tell you that the Mexicow was the best, I think he liked the melted cheese centre. Writing about them in this post has prompted me to look on their website and have since discovered that Pieminister pies can also be bought online *fetches bank card*.

Hopefully we’ll be going back to Bristol again in a couple of months, and if we do then stopping by at St Nicholas Market goes without saying. Next time though, there’s one food stall I will be making a beeline for and that’s Grillstock.