A pub on the outskirts of a city that is renowned for having some of the best food in the country has its own firm stamp on Birmingham’s culinary map. Established now for 15 years, The Plough is one of the most popular gastro food spots in town, and is currently ranked at #52 for all restaurants in Birmingham on TripAdvisor. Many a good word has been said about The Plough in Harborne… one too many to ignore. I’d spotted a photo on Instagram by The Plough posted in November of their Boca Grande Tacos. A choice of spiced pork, chilli battered cod, buffalo chicken, bean chilli or slow cooked chorizo available on Wednesdays. 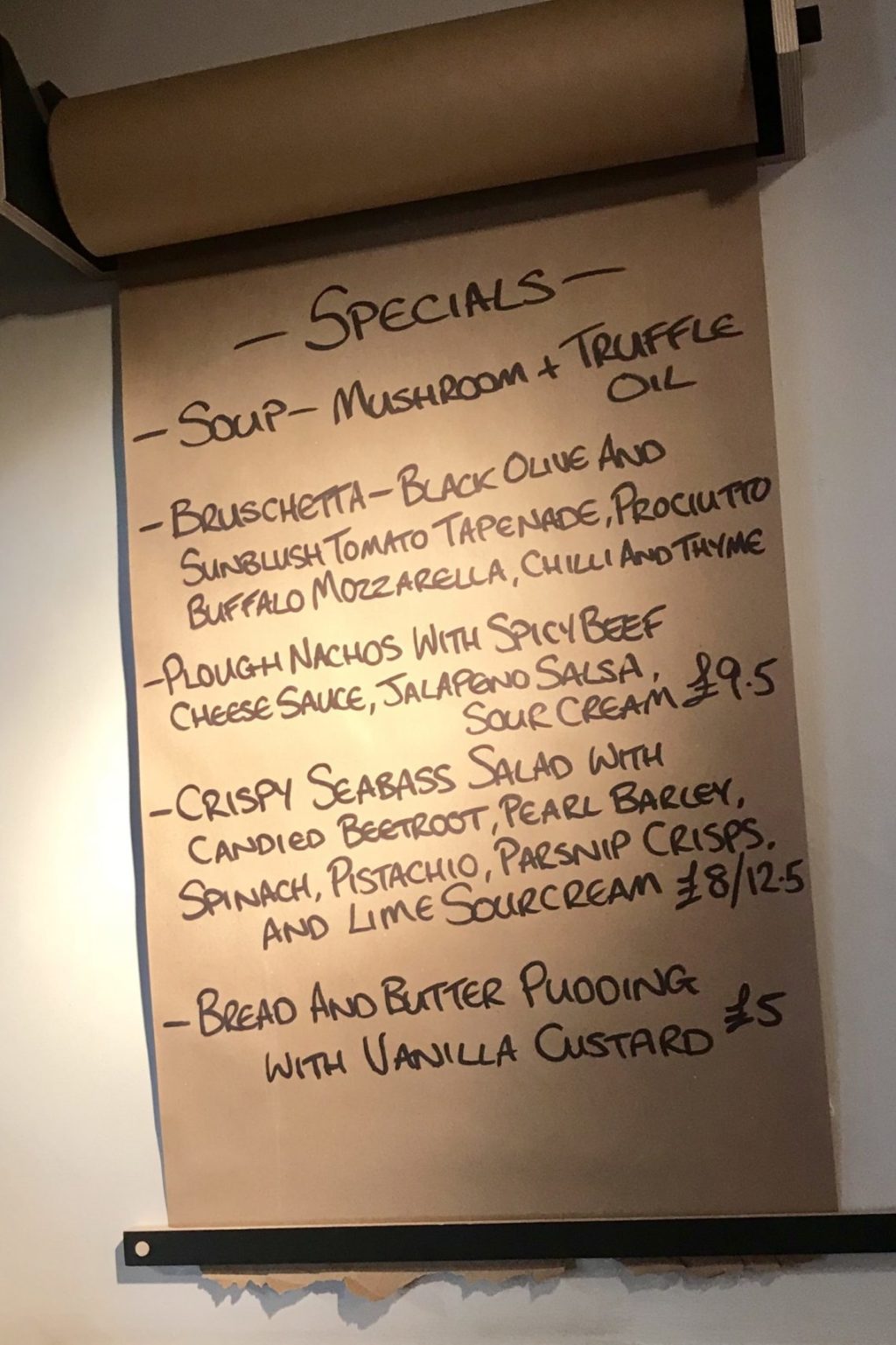 Our plans had taken us to Birmingham in January and as it was a Wednesday we thought it would be the ideal time to check out The Plough’s tacos. When we arrived we couldn’t see them on the specials or on the main menu, so Mr R asked someone behind the bar. Unfortunately we were told that they weren’t available during the winter months, so no tacos today. No tacos, no problem…we decided to stay anyway and see what else sounded good. The daily menu offered plenty of options including the small and large plates, pizza (2 for 1 on Mondays), burgers and Cuban sandwiches. The specials menu on the wall in the bar area gave some extra choices too.

To cure my hankering for tacos, the Plough nachos (£9.50) were the closest thing available and we both fancied trying a pizza. Mr R went to the bar to order and came back with my diet coke and a Chase smoked Bloody Mary. If you haven’t tried it, the Chase smoked vodka is incredible. I bought some for Mr R at Christmas and ever since we’ve seen it on a menu he’s ordered it with a Bloody. This one came fully loaded and Mexican style with a pickle, chilli and lemon garnish. It was a real livener with a punch hard enough to throw you right out of that hangover and back into a drunken stupor.

You’d be forgiven for thinking that £9.50 seemed like quite a pay out for a plate of nachos, and you’d usually be right, however the Plough nachos were colossal and easily enough to share for 2 people over lunch. A mountain of homemade tortilla chips came covered with a spicy beef chilli – the kind where the meat is ground so finely it’s almost like a delicious, thick meaty soup. Cheese sauce had been smothered on top and finished with a garnish of sliced jalepenos and red chilli. In opposing corners was a big dollop of chunky guacamole and fresh soured cream to cool everything down a little. Absolutely nachotastic!

Some like it hot and we certainly do, so we went for the fiery ‘Nduja pork, fresh chilli and caramelised onion pizza (£13) from the selection of meat, fish and vegetarian options on the menu. There is also calzone and you could choose your own fillings for £12.95 or as part of a deal with a draught soft drink for £9 if you order between 11-5pm Monday to Friday. The 2 for 1 pizza deal is only available on Mondays (all day), so we just had the one this time. One was enough though quite frankly along with our nachos.

The pizzas base was thin, crispy and cooked without fault. There were no burnt bits to ruin an otherwise good pizza and no soggy middles, just a flawlessly cooked base. A thin layer of tomato sauce coated the dough before generous helpings of nduja pork, fresh chilli and caramelised onions had been scattered all over the canvas. The cheese was still bubbling where it had just reached the correct temperature to melt, but again not spoil. Each bite was a hot mess, but in a very good way. 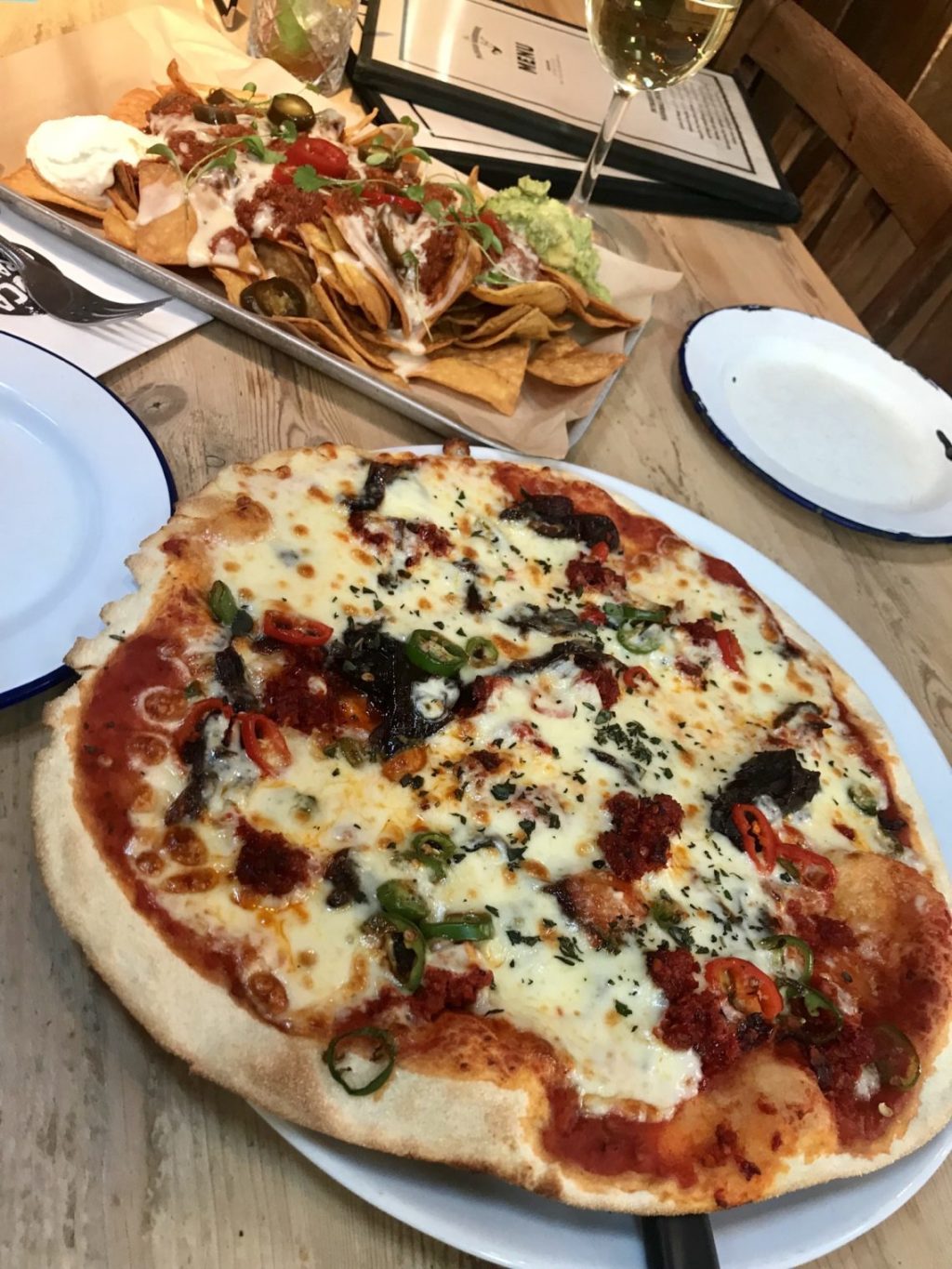 Having expectations can sometimes disappoint. You wonder should I have taken someone else’s advice on where to eat today? What if they no longer serve what I was there to order? Is this really going to be as good as they say? Then sometimes those expectations can be exceeded and it’s even better than you’d imagined, just like mine were on the day we visited The Plough in Harborne. Believe the hype, order the pizza and could someone please tell me when the tacos are back on the menu because I’d love one of those with a Cubano on the side – thanks 🙂