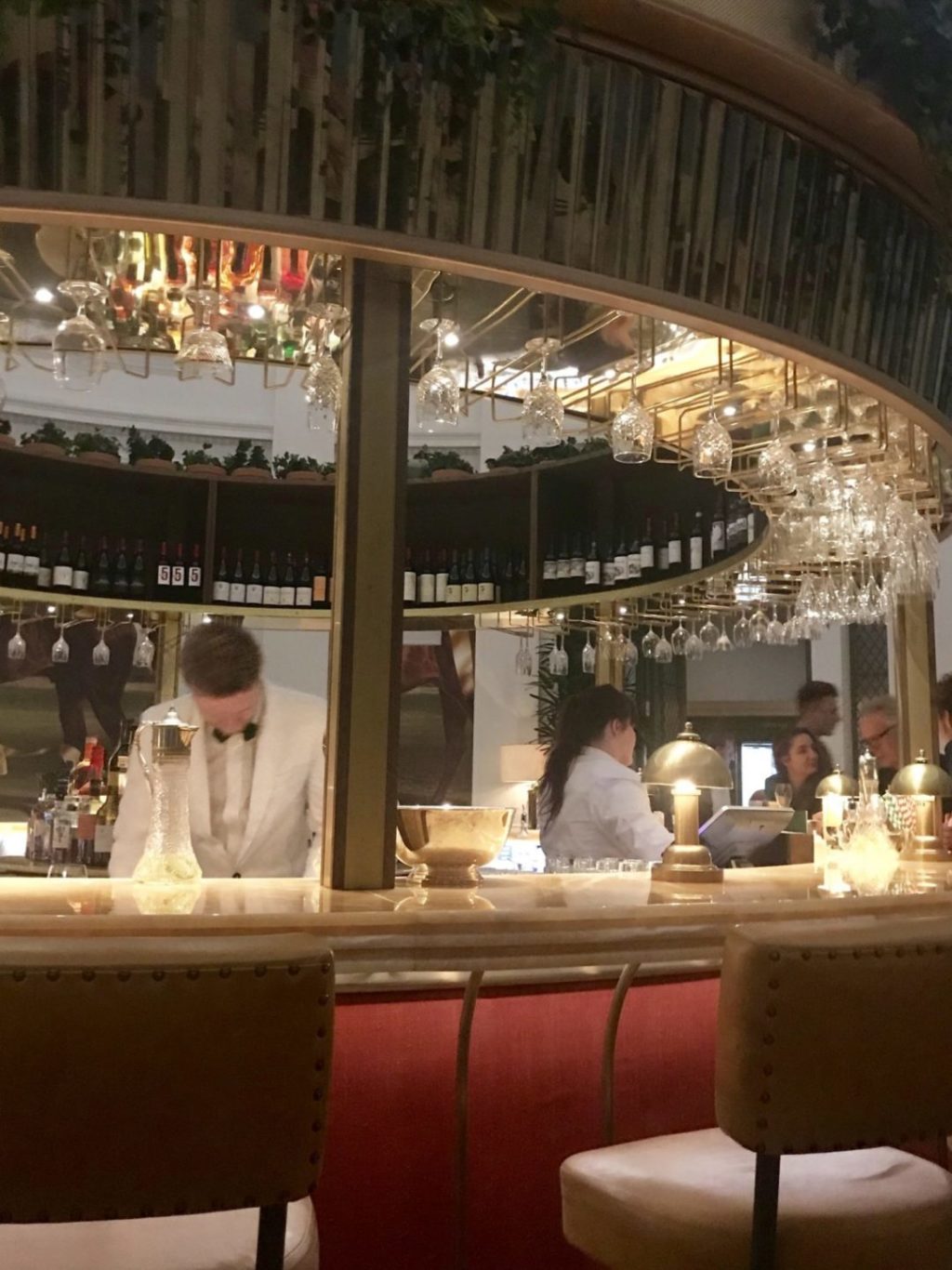 I had to flick back through my Insta account to work out when it was that I visited The Ivy on West Street, it was almost 2 years ago so it happens. The art deco vibe of the newly refurbished interior conjured images of cigarette holders and flapper dresses, and bow tied gentleman reclining in corners. Fond memories of Devonshire Cornish crab and scallops for lunch at the bar come flooding back to me now I think of it.

The chain of restaurants launched by The Ivy Collection, are dotted around the country, offering diners a glimpse into the luxurious world of The Ivy with a more casual approach. Most recently and most locally, The Ivy Grills and Brasseries chain launched a restaurant in a spot on Montpellier in Cheltenham. Although we weren’t amongst the greats on the guest list to be invited along to the opening, we cheekily tried our luck a couple of months later when we found ourselves staying in the Queens Hotel down the road. 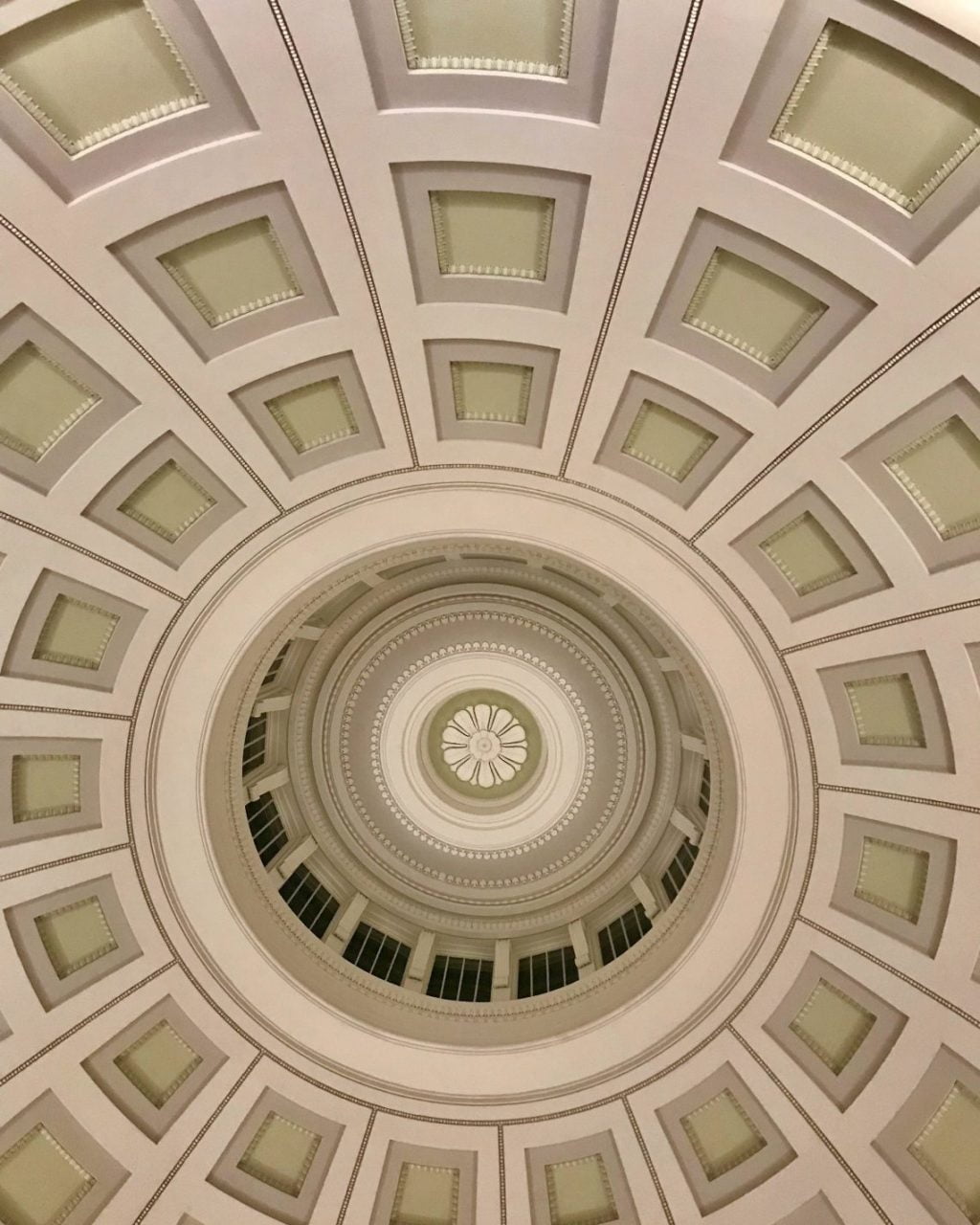 Admittedly on a Friday night in Cheltenham, even in January, it’s unlikely you would expect to walk in off the street into the newest and hottest place in town and expect to be seated, but as the saying goes; if you don’t ask then you don’t get. We were very undecided that evening about where we wanted to eat, so headed out and popped our heads into The Ivy. We were asked if we had a reservation (which or course we didn’t) and were told they were fully booked, but that they could offer us a table later in the evening at 9pm. We reserved this and went for a few aperitifs in a nearby bar.

Several cocktails later and we returned at 9pm to be seated. The first thing we noticed as we walked in was the incredible ceiling of the grade I listed rotunda. The room had been decorated in a similar way to The Ivy on West Street and we both loved the design of the circular bar in the centre of the room. It reminded us of drinking in big fancy American restaurant bars during our travels. Once seated and armed with menus, we just couldn’t decide what to eat. Already fuelled with cocktails we figured another couldn’t hurt, so ordered some drinks and some truffle arancini balls (£5.50) from the al a carte menu to get us started. We weren’t made to feel rushed at all and were left to mull over the menu casually until we were ready to order.

The absolute star of the show for me was the tempura prawns which I had picked as a starter. I couldn’t have chosen more wisely even if I do say so myself. The tempura can make or break a dish like this depending on whether the oil has been hot enough when cooking and if the mixture is thin enough. The prawns were crunchy as they had been described on the menu, and the oriental twist of garnish that accompanied them was terrific. Although available on the winter menu, this would go down a treat in the spring and summer months.

Across the table was the steak tartare (£9.25) which Mr R said he really enjoyed, but I found it to be ok at best. Raw meat and eggs would never be my first choice in all fairness. The beef striploin was seasoned with Tabasco dressing, cornichons, shallot and finished with fresh parsley. The toasted granary came in handy for spreading as a sort of pate if you didn’t feel much like using a knife and fork.

We’d waited quite some time in between our starter and main courses, but actually this really suited us. We had time to chat, drink our wine and digest the food that we probably weren’t hungry enough to be eating, but were going to have anyway. All of the tables around us were full with servers rushing around to keep up with the pace, all still with a smile and were seemingly organised. The bar was where I wanted to be once we had finished, because despite it being the central hub of the room it had a spacious and calm feel to it.

Although tempted by The Ivy hamburger, I had plans to eat one the next day whilst in Cheltenham, so instead ordered the Milanese chicken (£15.75). There’s no eloquent way to present a breaded piece of chicken with an egg on top, so when it arrived I was happy that it looked exactly as I might have guessed it would. That being said, it was a tasty and substantial plate of food and although possibly not the most exciting thing on the menu, I really enjoyed it. Along with my chicken I ordered a side of creamed spinach, toasted pine nuts with grated Gran Moravia (£3.95). Spinach with everything I say, and I’d definitely recommend getting a portion if like me your eyes are bigger than your stomach.

Devon crab features not just at The London Ivy’s menu, but also at the Cheltenham brasserie in the form of a crab linguine (£15.95). This was Mr R’s main course and he thought it was great. Again, not the most outstanding crab linguine either of us had ever eaten, however it was a very good meal. We also thought the pricing wasn’t too expensive, ok so you haven’t got your locally sourced produce and the freshest of ingredients, but this is the place to be seen in Cheltenham right?

With no need or space for a pudding we retired to the circular bar area in the centre of the room. It’s the sort of place we’d love to come to for a few drinks, but The Ivy understandably have a policy that only diners are able to drink at the bar. One of the reasons it was such a relaxed place to drink was because you didn’t have people wondering in an out of an already busy dining room and therefore allowing everybody to have the best experience possible. Before we knew it last orders was announced – the time really did fly by!