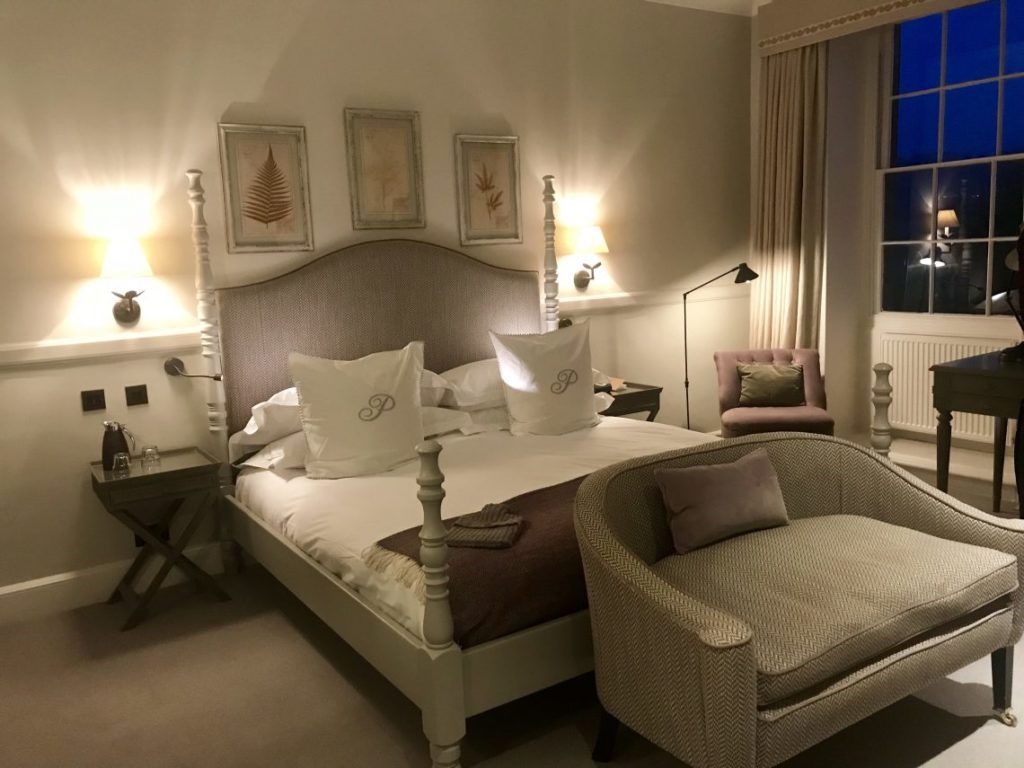 A lovely article caught my attention in Country & Town House Magazine entitled ‘Where To Stay: The Best Hotels in The Cotswolds’. Amongst those listed was The Painswick – a 4 star hotel located in the small town of Painswick, just 10 miles outside of Cheltenham. It so happened they were running their incredible hygge hibernation package, priced at £149 for stays between Sunday-Thursday, including breakfast (based on 2 people staying). The Calcot Collection who own several of Gloucestershire’s luxury hotels took on The Painswick in Spring 2016, and 6 months later the group’s latest acquisition picked up the title of ‘hotel of the year’ by the Sunday Times – congratulations! Head chef Jamie McCallum is fairly new to the team, bringing his experience of working in a one Michelin star London restaurant to the country house hotel restaurant, which seats 34.

As a huge fan of The Village Pub, Barnsley and having visited Barnsley House for lunch a couple of times (also both members of the Calcot Collection), I knew I was going to enjoy a visit to The Painswick. There’s some interesting information documented in The Good Food Guide too about The hotel’s past, mentioning that the grand 18th century building was once built on wool money, and then later transformed by an architect in 1902.

I’ll try not to go on too much about our room as this is a food blog after all, however it would be unkind of me not to express how impressed we were, noting the attention to detail and extra touches – it was exquisite. I also won’t spoil the little surprises for you, but if you’re reading this and are able to take advantage of their current overnight stay offer (check website for details as offers change regularly) then you absolutely won’t regret it.

Back to the food and it seemed only right that we should start the evening with a cheeky cocktail or 2. We allowed the knowledgeable mixologist to let us into a few secrets in the art of making the perfect gin & tonic. Our dinner was booked early, so figured another wouldn’t hurt and we stuck around to find out just how dirty a Martini could get. Despite being warned how strong it would be, I braved the Broadway Sling (£13).

The dinner menu was brought to us at the bar so we had plenty of time to relax and decide on what to eat. Decisions made and we were escorted from the bar area, stopping on route to admire the butcher’s table laid out with freshly baked bread rolls, Mediterranean antipasto and charcuterie on a professional meat slicer. We loved the décor and relaxed feel to the dining room, made even more comfortable by the friendly staff.

An ox cheek ravioli appeared with compliments from the chef, garnished with charred onions, a sweet potato puree and finished with a very intense, but tasty Guinness reduction. This was the sort of dish that you really wouldn’t need too much of, it was just the right size to appreciate and enjoy the flavours – a taster of what was to come.

It had earlier been recommended to order the crisp pressed pork starter with Romesco sauce, grilled onion (£8), which was a new addition to the menu. I went along with the suggestion and savoured the pork meat, which was succulent and had intensified through the slow cooking process.

Mr R had opted for a very different starter than me, by choosing the twice baked parmesan soufflé, smoked haddock, spinach (£10). The entirely formed soufflé presented in a mini cast iron pot was remarkable in appearance and substance. A notoriously tricky dish to perfect, but this soufflé sat proudly and puffed in all its glory. The inside was soft and fluffy with a pleasing texture on the tongue. Chunks of smoked haddock pieces were found at the bottom amongst the luxuriously creamy sauce. Pure indulgence.

Mr R had chosen well this evening, following on with the beef Wellington, dauphinoise potato, buttered greens (£28). Is that not just the prettiest looking beef Wellington you’ve ever seen? Cutting through the pastry of the ‘wellie’ revealed a beautifully pink fillet of beef which stared back at us (not literally, obviously). The dauphinoise was similar to a fondant potato, as it was buttery with a golden finish, although shaped in a square rather than the traditional cylinder. A rich ‘beefy’ reduction on the side, complimented and moistened the plate, bringing everything together. Of course the buttered greens were much welcomed too.

I often order the fish as a main course working on the assumption that it’ll be the lighter option, but it rarely is. The roast sea trout, pomme anna, Jerusalem artichoke, chorizo, shellfish sauce (£21) looked wonderful. I’d asked for some extra buttered greens (£4) which were a great addition to the dish, once the shellfish sauce had also been poured over the trout. This was one of the mixologist’s favourite dishes, as it reminded him of his home in Portugal and I could see why he liked it so much.

With all of the rich food consumed, a dessert seemed like a ridiculous idea, but we are not quitters! A wintery apple tarte tatin to share (£16) was on offer and it was explained that it would take a short while to prepare. Clearly we were in no hurry so we waited for the pastry tart to be freshly made to order for us, arriving at our table glistening and piping hot. The contrast of the cold vanilla ice cream along with the tart apples is a match made in heaven and why this will always be one of my favourite puds – at home we like to use pears. The picture says it all.

After dinner there was plenty in the hotel to keep us occupied. A cosy snug area with an open fire offered interesting books and magazines to help guests relax. Just like in our room there were little touches everywhere. We loved the quotes and poems hung up on the walls and even in the loos where pink pineapple wallpaper welcomed the ladies. Back in our room we were able to unwind with a soak in the roll top bath and get cosy in Egyptian cotton sheets.

The following morning homemade crumpets, fresh fruit, charcuterie and an array of other breakfast goodies were laid out on the dining room’s butcher’s table. We had a shot each of the chef’s own fruit juice and ordered a hot breakfast of smoked salmon & scrambled eggs and the eggs Benedict. The perfect start to the day after the most wonderfully relaxing evening. The only downside was that it was now time to leave, despite being very tempted to stay on for an extra night. 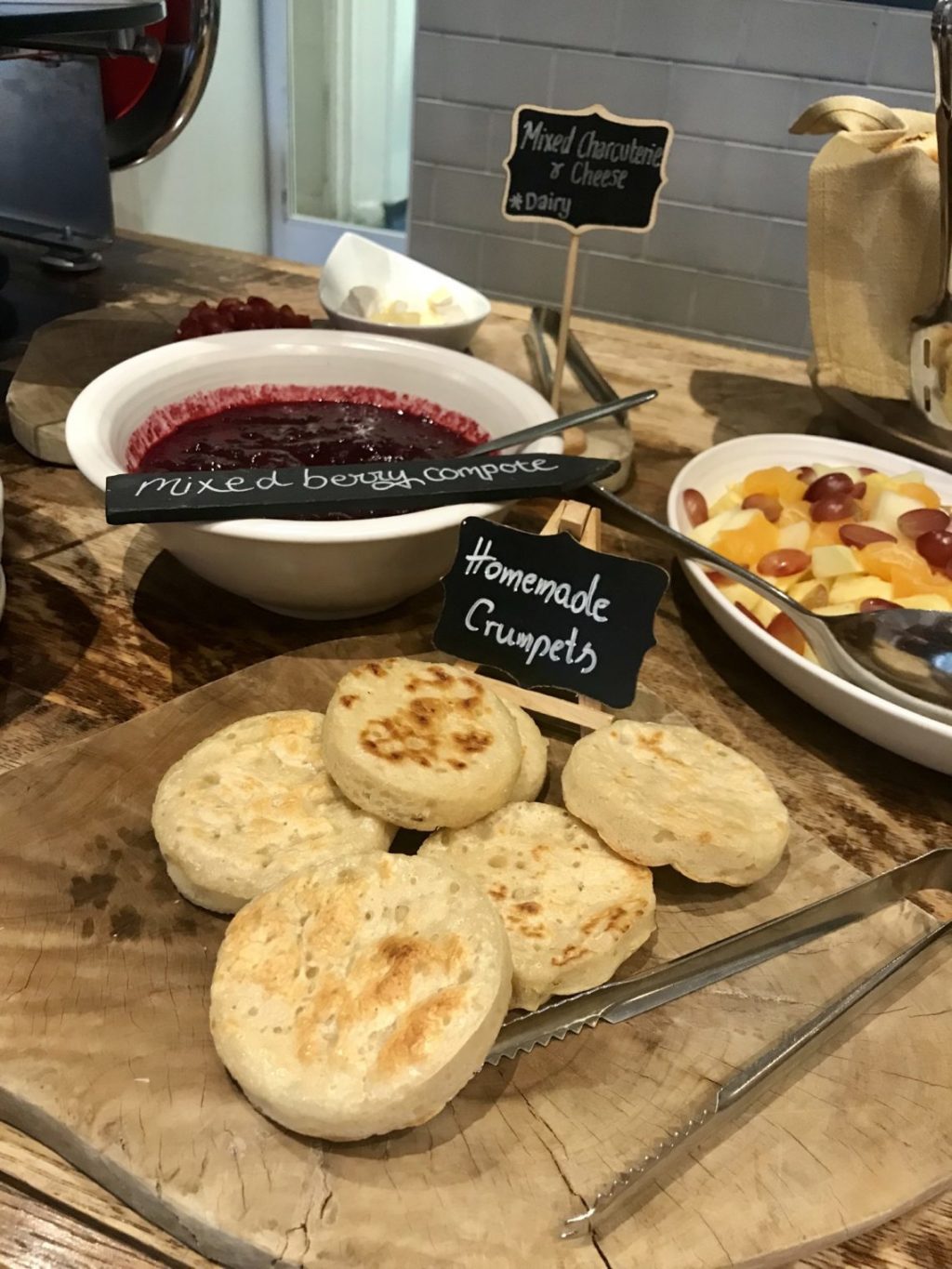 *Although our dinner at The Painswick was complimentary, we paid for the cost of the room and all of our drinks. As ever my words and photos are my own.  Thank you again to The Painswick and to the whole team for hosting us and making our stay both welcoming and one we’ll always remember.