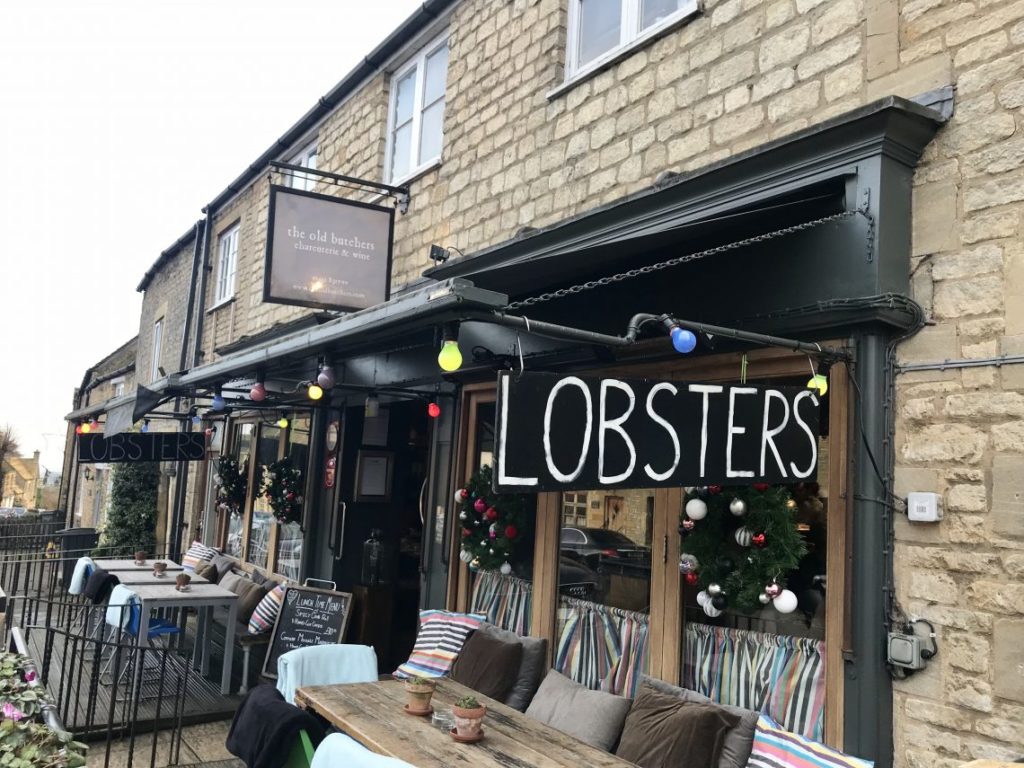 Shellfish crackers, a shell bowl and finger bowl were all provided for the messy and painstaking task of extracting the sweet, succulent flesh from within the crustacean’s crevices. The hard work paid off, for inside the ‘tricksy’ shell a tasty reward was unveiled and oh so worthy of the effort.

Back in October we took some time out to explore a few of the villages and towns which are relatively close to home. A short stop in Stow-on-the-Wold was amongst our Autumn food tour destinations, where we found ourselves eating an early lunch at The Old Stocks Inn. Then, whilst browsing Stow’s independent shops and enjoying the Autumn colours, we stumbled across an intriguing eatery with an eye catching sign outside which read: ‘LOBSTERS’.

Ever since our lobster brunch at Lobster Café in Warwick (also back in October) we’d hoped to find somewhere similar offering fresh seafood locally, for a special treat. It wasn’t our day to visit, but we had The Old Butchers noted. A month later when Mr R and I were discussing Christmas plans, he surprised me with the news that he’d booked us a night away at Wyck Hill House just outside of Stow on Christmas Eve Eve, with lunch at the place with the lobster sign!

We flicked through our copy of The Good Food Guide 2018, and were delighted to see The Old Butchers listed there as a local gem. As the name suggests, The Old Butchers was indeed an old butchers shop, now owned by the Robinson family who have been there since 2005. Pete heads up the kitchen, whilst his wife Louise manages the restaurant with their eldest daughter Millie by her side as front of house. The family pay tribute to the old butcher shop’s past by offering a selection of cured meats (charcuterie) which appear at the top of the menu.

We were here for seafood, and although I’d previously planned on devouring a lobster, this all changed when I saw what else was on offer. We were greeted and served by Louise who said we could choose where we wanted to sit. As we had booked an early lunch, this gave us a good pick of the restaurant which was almost entirely full just half an hour later. We enjoyed the quirky décor and spent time reading plaques on the walls, whilst sipping on the wine and bellini cocktail we’d ordered.

To satisfy the lobster craving, we started our lunch with some fresh langoustines (£3.95 each). Shellfish crackers, a shell bowl and finger bowl were all provided for the messy and painstaking task of extracting the sweet, succulent flesh from within the crustacean’s crevices. The hard work paid off, for inside the ‘tricksy’ shell a tasty reward was unveiled and oh so worthy of the effort.

One of our favourite dishes of Cornish crab & chilli spaghetti appeared on the menu (£10.50/£17.50). We shared the smaller bowl as a second course, and were blown away by the incredible flavours and stunning cooking of this bowl of food. Our opinion of The Old Butchers quickly formed in a very positive light. We could see that the ingredients coming from the kitchen had been treated with an immense respect, and were undoubtedly of the highest quality. The presence of garlic and chilli were undeniable and we both loved the ‘kick’ of heat, but still the texture and flavour of the succulent crab was in no way compromised. The seemingly simply sauce was silky and luxurious; it was one of the best seafood pasta dishes I’ve had inland for as long as I can remember.

Lobster, Dover sole, calf’s liver, ox cheek bourguignon, steak, fish stew, aged ruby red beef and even a burger were amongst the tempting plates available to indulge in on the day’s menu. Prices ranged from £8.95 for the smaller portions on offer (for selected dishes), and up to £35 for the Cornish Dover sole, and £68 for a 900g Cote de Boeuf (for 2 persons). There was also a ‘lunch specials’ menu which was priced very reasonably. Mr R opted for the smaller portion of Cornish mussels & clams, with samphire & nduja (£8.95), and it was the deep-fried haddock, pea puree, tartare sauce & hand-cut chips from the ‘lunch specials’ for me (£11.95).

Freshly cooked mussels and clams were relished by Mr R who was very complimentary about his choice. The spicy ndula gave the dish an Italian twist, and was finished with crunchy samphire for colour and texture. The seafood sitting inside thoroughly cleaned shells was cooked beautifully and tasted absolutely delicious. We shared the chips that accompanied my haddock to dip in and finish off the yummy sauce.

The first thing I noticed on my plate was that the homemade tartare sauce was presented in an oyster shell, a truly inspired idea. The hand-cut chips were thinly cut as fries, and exactly what I wanted to eat along with my battered haddock. The fish itself was a thick fillet, moist and succulent throughout; the batter light and crispy. There was a burst of colour from the creamy pea puree and every element combined made each mouthful seem heavenly and worth savouring.

It would be fair to say that we both found the food to be exceptional, and the perfect way to commence our Christmas holiday. Dessert was so tempting, but we had to decline this time as dinner was also booked at the hotel in the evening – it’s a tough life. Needless to say we have every intention of returning to The Old Butchers in the New Year, and have been highly recommending it to friends and family, based on the superb lunch and welcoming hospitality we received during our lunchtime visit.