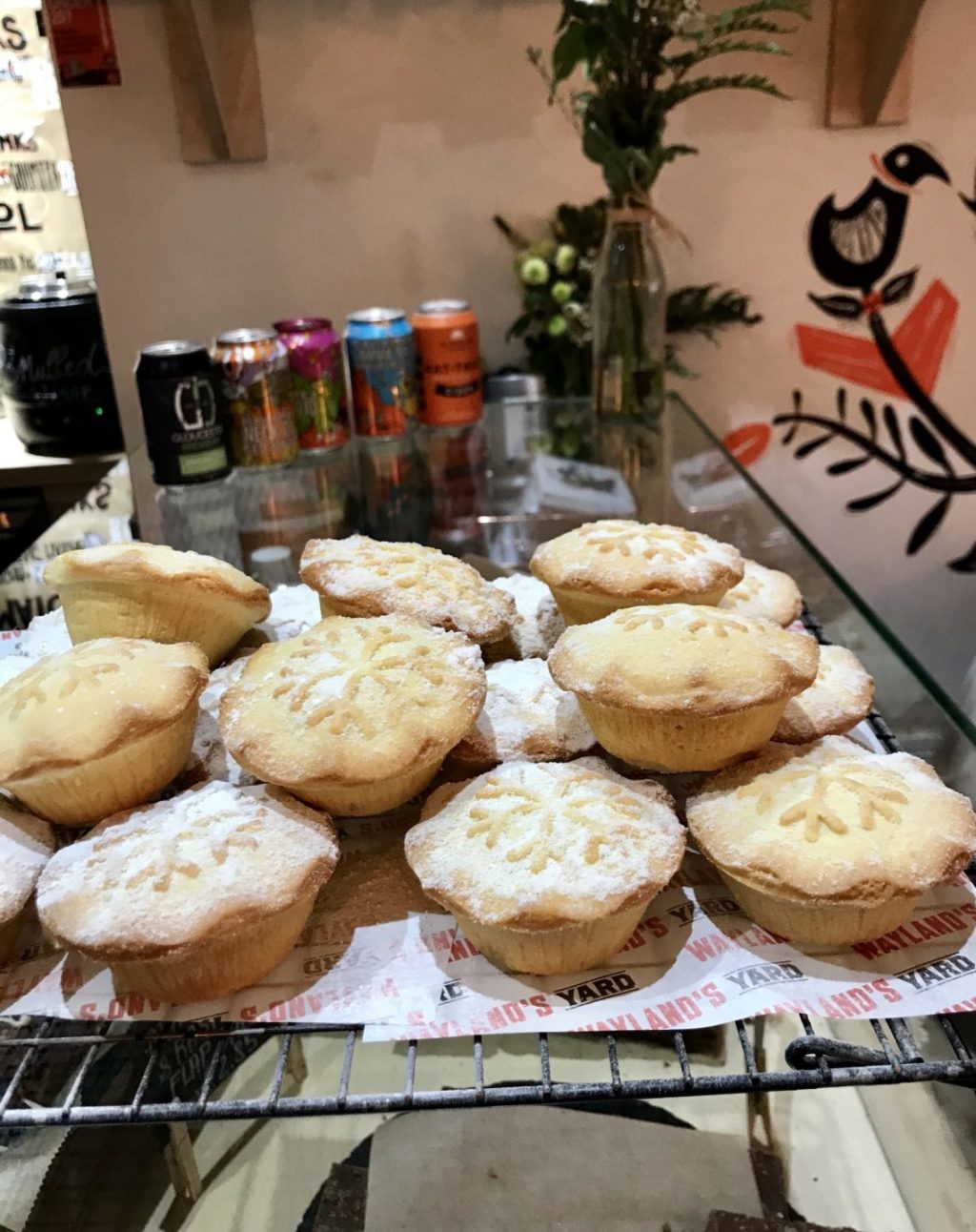 Following our first trip to Wayland’s Yard back in October, Mr R and I were both eager to go back, and continue working our way through the brunch and lunch menu. The perfect opportunity arose to make a start on this when we got an invite from them to the Yard’s first Christmas Festival and Craft Market. It was also going to be the first meal after a 4 week diet / detox that had just concluded the previous day, and I couldn’t wait. The festival sounded like a superb and unique idea for the year old Worcester coffee shop, as well as being a great use of the space they have.

The Christmas festival took place over the weekend of Saturday 16th and Sunday 17th December; and as well as hosting over 40 crafters / business people, live music had been lined up from local musicians and a choir.

We arrived at around midday on Saturday, and it would have been much earlier if it hadn’t been for the inevitable Christmas shoppers parking delays. All parking issues were forgotten as soon as we walked through the doors and were greeted immediately with friendly staff who handed us menus. At the counter we met with Sam for the first time and chatted to him about the event, where he told us about the stalls which were on the 2 floors upstairs as well as outside in the yard. He also pointed out the ‘eggy crumpets’ (with grilled halloumi, smoked chilli jam & tomato sauce – yum!) that were the special of the day and highly recommended that we tried them.

Before lunch we made our way upstairs first of all to have a little browse and to get our bearings. Everybody was so incredibly friendly at the market. Subsequently we spent time getting to know some of the people behind the crafts, and began eyeing up a few things that we might like to go back and purchase.

I needed a warm drink and as I don’t drink coffee (wish I could as Mr R says that Wayland’s Yard coffee is the best he’s tried), I opted for a hot chocolate instead. Mr R went for a cappuccino and both drinks arrived at our table piping hot and finished with an impressive and clever latte art design on each. My hot chocolate was exactly what I’d wanted, the chocolate wasn’t too intense or sickly and so I enjoyed it immensely. Mr R was also very happy with his cappuccino – both were a real treat.

As much as those eggy crumpets sounded divine (and we probably should have given them a try), there were too many other things on the menu to tempt us. Sam had also told us after our last visit to the Yard that one of his favourite dishes was the Vietnamese Banh Mi sub, so Mr R opted for one of those. I couldn’t stop thinking about the ‘filthy fries’ that we had last time (a mix of curly and sweet potato fries seasoned with chilli salt and topped with a generous helping of melted mozzarella, jalapeños, peppadew peppers, BBQ pulled pork, parmesan shavings and finished with blue cheese sauce), so we got a side order to share. I decided to go with the salmon and pesto on toast with semi dried tomatoes, poached eggs, watercress and parmesan shavings.

The Vietnamese Banh Mi sub had a similar vibe to the filthy fries, except with more of an oriental twist. Sriracha goes on everything in our house, so the generous helping went down very well, as did the gorgeously soft Ma Baker’s bun that kept the ingredients wrapped up together. The oriental pulled pork was juicy and full of flavour, similar to it’s BBQ equivalent which topped our favourite ‘filthy fries’ dish. My lunch choice arrived hidden under fresh watercress, and as I dug deeper a big portion of delicious smoked salmon was revealed; along with 2 perfectly poached eggs, a thick spread of pesto and some tangy sun-dried tomatoes, balanced on top of a heavenly slice of toasted sourdough.

After our immensely filling and satisfying lunch, Mr R and I ventured back outside to listen to some of the artists and live music on show. The stalls outside were selling Christmas cards, pottery, jewellery, artistic prints and more. It was also there that I met Jilly from Architectural Impressions for the first time, after following each other on Twitter for a while now. It’s always nice to put a face to a name 🙂

The Yard began to get busy and to make room for other people we went back upstairs to return to the stalls that we wanted to make a couple of purchases from. At this point we realised we’d already been hanging around for more than a couple of hours, which seemed to completely pass us by as we were enjoying the festival so much.

On the first floor we went back to see Rebecca from Ayuroma, as she was selling some of her natural range of beehive skincare products. We went away with some muscle rub, foot cream and some really cool products that neither of us had seen before for our dog. The flea and tick repellent spray we haven’t yet tried, but the paw balm we’ve used a couple of times on the dog and she seems to be a big fan.

The next floor up was filled now with shoppers of the craft market, but we managed to squeeze our way back to see Kate Callighan who had on display a selection of her beautiful hand painted glass. I had fallen in love with the gin glasses, so we bought 2 to enjoy back home and to drink our favourite gins in style.

Sadly we didn’t have enough room for a mince pie before leaving, but we’d had a fantastic afternoon and were even starting to feel a little festive. Thank you to Sam, Polly and all at Wayland’s Yard for inviting us to your first Christmas Festival. The weekend was clearly a huge success and we wish all of you a very Merry Christmas and a Happy New Year! Thank you also for our voucher to return for lunch, we look forward to seeing you again in January, if not before. PP x

*Although our lunch and drinks were complimentary on this particular visit to Wayland’s Yard, as ever my words and photos are my own. Thank you again to the whole team for inviting and hosting us during our visit.