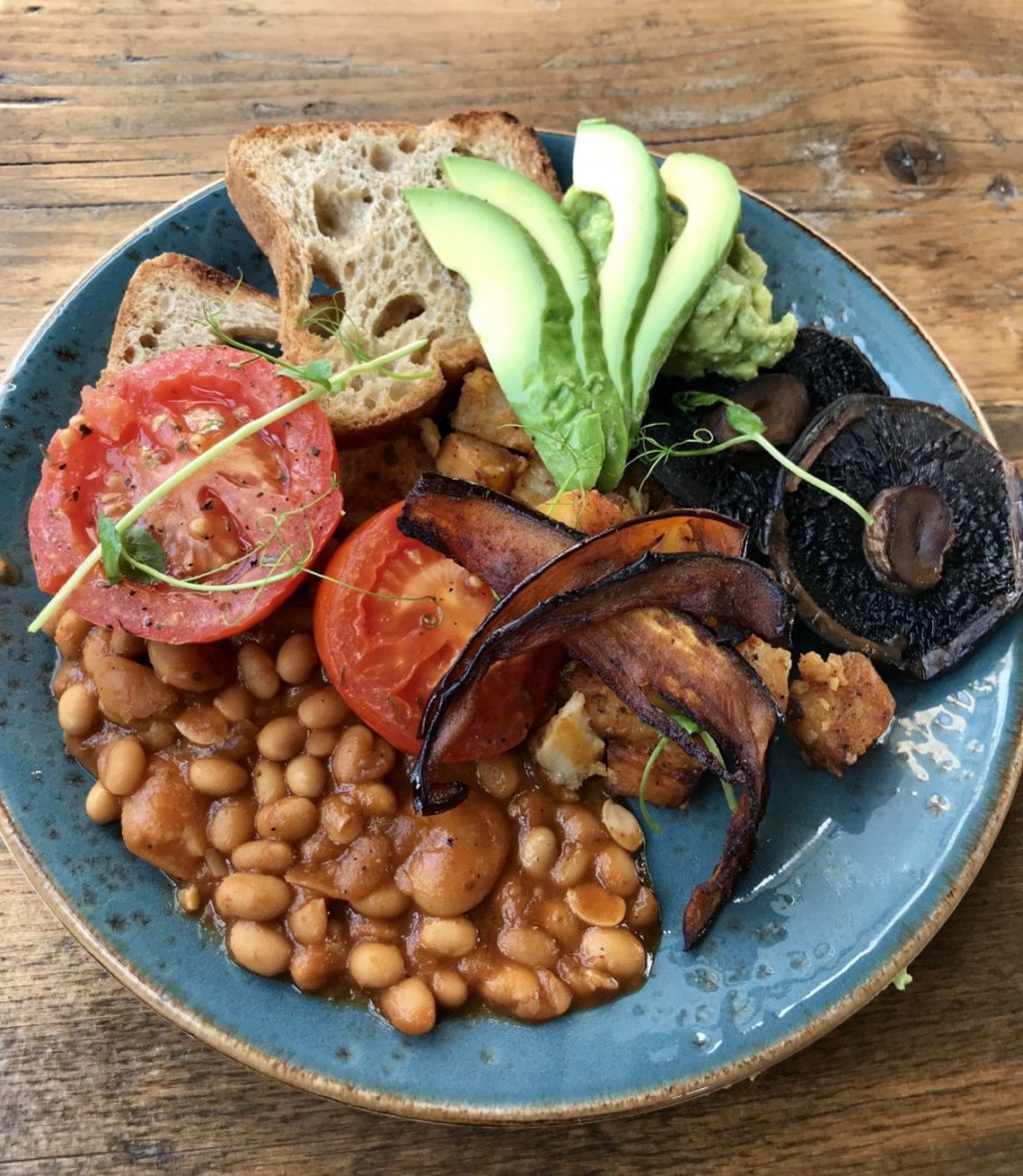 When I decided to do a 4 week detox leading up to Christmas this year, it seemed like a great idea for my health, but probably not so great in terms of content for my blog. The plan was to entirely cut out booze, gluten, wheat, dairy, red meat, processed foods and chocolate for a whole month. It felt like an impossible task, but I was determined to give it a go. A week into the ‘detox’ and I got an invite from Natural Healthy Foods in Birmingham to check out their new weekend brunch menu – great timing!

Natural Healthy Foods is a vegan shop specialising in organic, vegan foods and is located in Digbeth, Birmingham. The recently opened restaurant (and the city’s first vegan eatery) is based within the flagship store on Suffolk Street (directly opposite The Mailbox); and as well as now offering a breakfast / brunch menu, a buffet style lunch served by weight is also available from noon.

When I explained to Mr R we were going for a vegan brunch in Birmingham he looked horrified. I’m pretty sure he felt I was taking things a little too far, but I assured him it would all be fine. Our table was booked for 11am (weekend brunch is served from 9 – 11:30am) and we’d skipped breakfast so we both needed a substantial meal to get us through our Christmas shopping in town, which we had planned for after our brunch. At the counter the NHF staff explained that there were menus on the tables and that we could order back at the counter when we were ready. 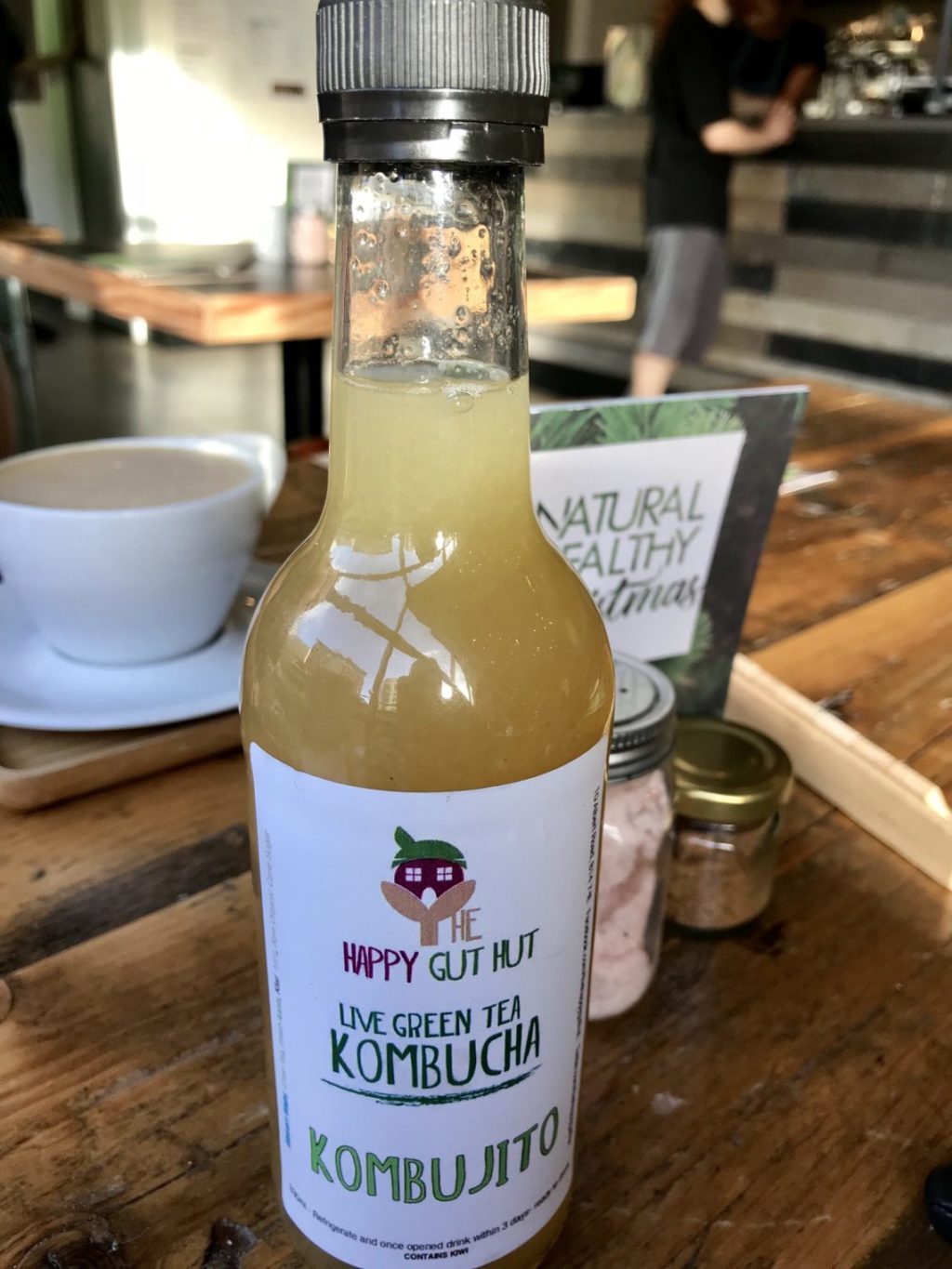 I fancied a green tea and ordered something called ‘Kombucha’ live green tea. I had no idea what this was and when it arrived in the bottle I was even more curious as I’d genuinely thought it would be a hot tea. I then spotted the leaflet on the table which explains that ‘Kommbucha’ is in fact a probiotic drink full of beneficial bacteria which helps strengthen the immune system and aid digestion. Although it had an unusual flavour, I actually quite liked it. I also just really enjoyed drinking it knowing that the fermented tea was doing me some good.

We both ordered ‘The Natural Healthy Breakfast’ each and asked for the scrambled tofu to be swapped out for some smashed avocado instead. The breakfast arrived quickly and looked fantastic. I was most intrigued to try the aubergine bacon and was not disappointed. I could taste the likeness to the smoky flavour of bacon,  I was on my own with this one, but would definitely order it again. The beans were in a homemade sauce, and the hash brown potatoes were really well cooked and seasoned, as were the grilled mushrooms and tomatoes. I was dubious about gluten free bread, but honestly I couldn’t tell the difference and really enjoyed the toast. The avocados were smashed and creamy, and were topped with freshly cut slices to finish off the plate. Mr R and I both agreed that the breakfast was filling, delicious and we both felt good for eating the healthier option, instead of going for a burger, which we’d usually do.

I only really spotted the smoothies board whilst we were eating, and had a closer look when we’d finished. I wanted to try the ‘protein power’ smoothie, so we ordered one to share. It came in a really cool glass jar with a funky straw. The drink was thick and full of goodness, it was also really filling. I could only drink a little bit of it so Mr R finished it off as he thought it was delicious. Before we left I popped to the toilet and noticed on the back of the door some information about the plant-based festive menu, which launched on 1st December. It is available daily from 5-10pm at £18.95 for 2 courses or £22.95 for 3 courses. A great alternative Christmas get together dinner if like me you’re trying to avoid the unhealthy junk food. You will need to book though to reserve a table.

As we were leaving, Mr R and I browsed with interest around the store and looked at all of the fascinating organic, vegan products and food on sale. Next time we’re in Birmingham I’d love to revisit to try a few things and also to check out the ‘pay by weight’ lunch buffet.

*By the way, in case you’re interested, I completed the diet / detox and you can read all about it here.

*Although our brunch and drinks were complimentary on this particular visit to NHF, as ever my words and photos are my own. Thank you again to the whole team for inviting and hosting us during our visit.