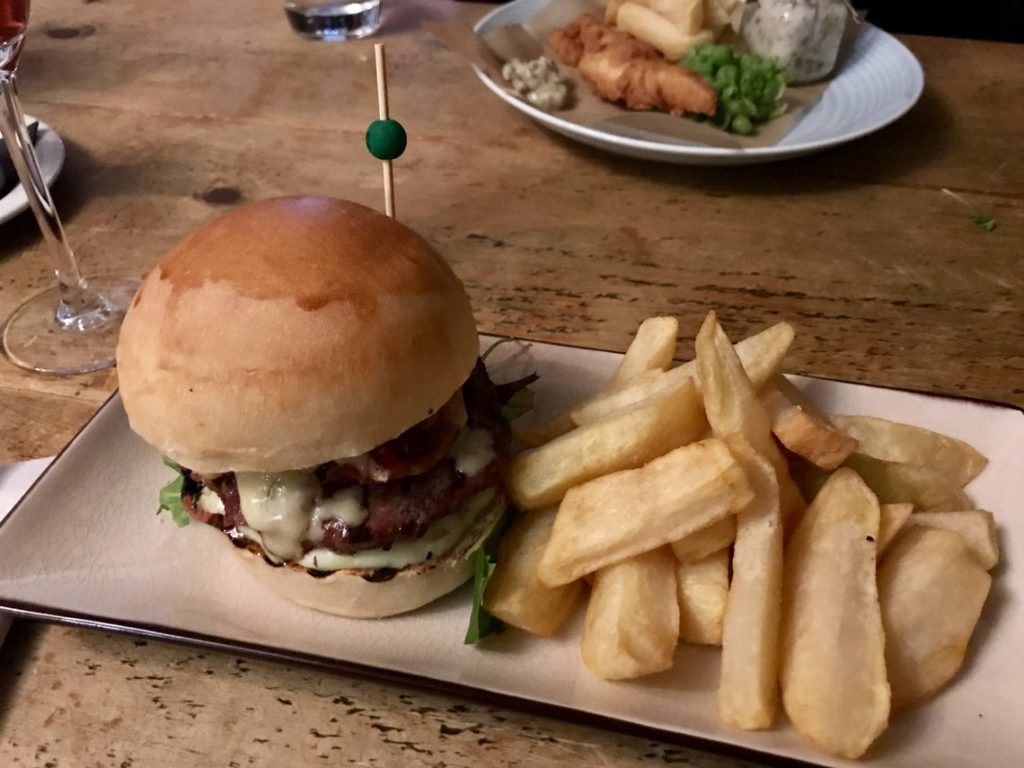 To me The Old Rectifying House has always had one of the best cocktail and gin selections in the city by far, which has also been the main reason for my previous visits. It’s no coincidence that historically, the rear of the 18th century building used to be part of the Williams Distillery (owned by John Williams) and was used to rectify, or purify, gin on its arrival from the main part of the distillery across the river at Tybridge Street.

It was only when I recently started a new Facebook group encouraging local people to talk about and recommend their favourite Worcestershire restaurants, that the riverside pub seemed to keep getting a mention, and the focus was on the food. The Old Rec has also caught the attention of Michelin inspectors and has retained a Michelin plate entry since 2015, as well as being the only restaurant in Worcester to be listed in the Michelin Guide in 2018.

We called ahead to make sure we could get a table, but the friendly man who answered the phone said it was fine to just turn up. At the bar we were told we could choose a seat, and we found a spacious table in the restaurant, where we were greeted shortly afterwards by our waitress for the afternoon. In hindsight we should have asked for her name as the service she gave us during our visit was exceptional.

I was in need of a cocktail and chose the Forest Fizz (Crow Man’s Raspberry Gin, Creme de Mure, Cassis and Prosecco). At £8 a glass I thought the price was very reasonable compared to similar cocktails I’ve had recently in other local restaurants that have cost closer to £10! As a result I granted myself permission to order a second later on during our lunch.

Our super helpful and knowledgeable waitress asked if we’d like a copy of the vegan menu. We declined, but were pleased to have been offered the option. Fast forward a few weeks and I’m now on a (short-term) gluten free / vegan / detox diet and this would have meant that I wouldn’t have missed out on anything, as there are some great choices available for all dietary requirements. When we looked at the lunch menu, Mr R and I were both instantly drawn to the small plates dishes and we wanted to order everything. Obviously that would have been ridiculously greedy so instead we compromised and selected 3 plates to share. We started with harissa courgette fritters (£4.50), beef brisket croquettes with Asian slaw (£7) and Nduja bruschetta (£3.75).

When the dishes arrived we knew we’d made a good decision and our waitress confirmed it by saying we’d picked the best starters. We began with the courgette fritters which looked similar to bahjis as they were deep fried and crispy on the outside, but on the inside they were soft and had an almost cheesy texture. They were moreish and delicious, as was the aioli dip that we’d chosen to compliment them. Moving onto the beef brisket croquettes on the next plate and again we were far from disappointed. Inside was a delightful mini stew, with juices and there were even carrots present. The croquettes were piping hot, moist and wonderfully meaty. Finally we tried the bruschetta pieces topped with spicy Nduja. They had a real kick which developed slowly on our tongues – a great choice for us as lovers of anything with a bit of heat. I’d highly recommend giving the small plates a go and sharing a couple (or more) with your fellow diners.

As we like to try as much as we can when we visit somewhere for the first time, Mr R and I have a tendency to over-order for a taste of everything, and subsequently end up eating absolutely EVERYTHING. This usually means that by the time we get as far as the main course we are feeling pretty full. It was a relief when today our main courses arrived and they were sensible lunch portions, so we didn’t feel too intimidated by over-sized plates of food. The sensible portions also came with sensible prices too, which was also a huge plus. Mr R chose the small tempura-battered Haddock (£9), and I went for the Rec aged burger (£12) – I’m so predictable.

The fish came with handcut chips, Tartar Sauce and Parsley Marrowfat Peas. This was a really enjoyable plate of food, and Mr R was able to comfortably finish it feeling satisfied and not over full. The burger was a bit more of a handful (don’t get me wrong, this was no bad thing). The bread was thick, soft and doughy, as if it had been made fresh in-house. Inside the bun was a tightly combined beef patty, which had been seasoned and cooked well and was still juicy. My preference with any burger is always to have a thicker, more crumbly piece of meat, but that being said this one did not compromise on quality. Streaky bacon, caramelised onion, cheddar cheese, rocket lettuce, a gherkin & aioli topped the patty, and a slightly more generous portion of handcut chips, came on the side, which I did need a little bit of help with.

We paid at the bar with ease as were in a bit of a rush towards the end, and the restaurant had become a little busier by now. As we walked away and reflected on our experience, Mr R and I both felt that the drinks and food at The Old Rec exceeded our expectations, as did the service. The quality had been good value for money, and we’d thoroughly recommend that you give The Old Rec a try if you haven’t been recently.

*Although The Old Rectifying House is a short walk from the city centre and high street, there is a pay and display car park next door for convenience.