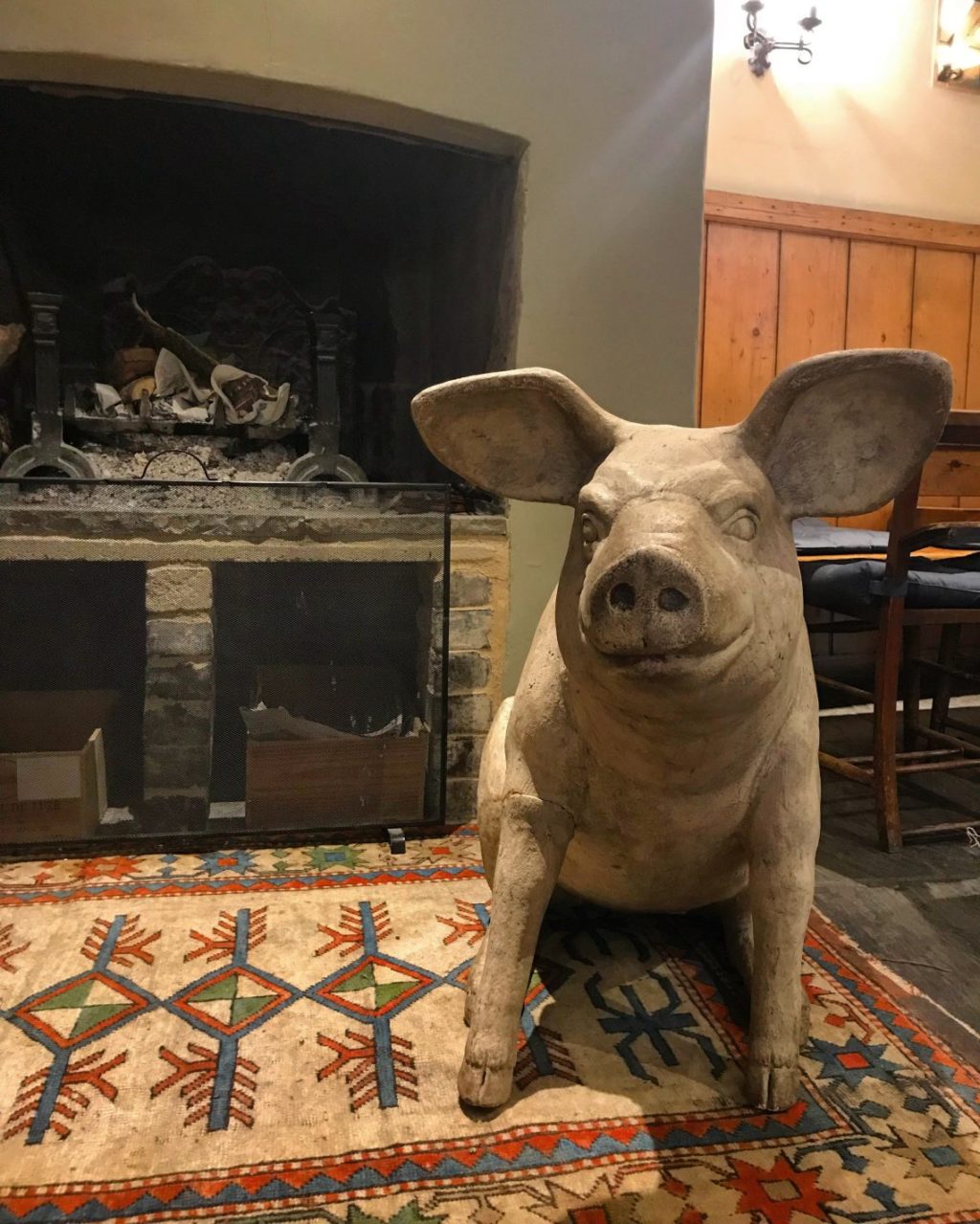 Sunday morning was a little hazy following our huge dinner at The Village Pub, Barnsley the evening before. There may have been a few drinks back at the hotel too, although I won’t go into that here. To blow away the cobwebs we took a drive to Bicester Village, for a walk around the outlet shops. While I browsed pretty bags and other things I couldn’t afford, Mr R began experiencing a mild sense of humour failure once amongst the other shoppers – time to leave. Mr R must have been quite hungry as he drove out of Bicester very quickly and we arrived at The Kingham Plough in no time at all. 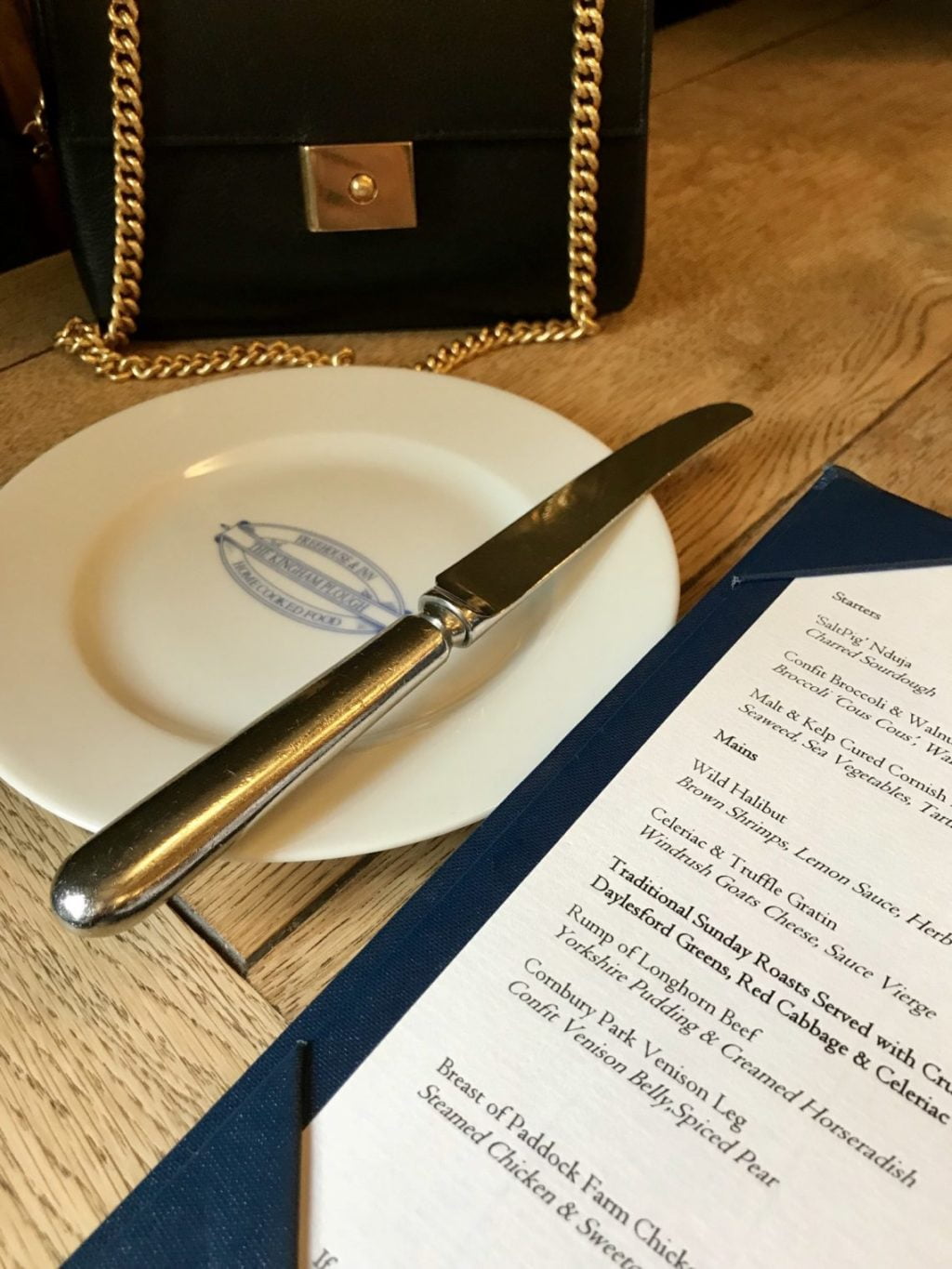 I’d heard about The Kingham Plough plenty of times, but when Mr R’s brother and wife recently stopped for Sunday lunch and told us how amazing the food was (and how front of house manager Michal Kovac even gave them a lift to the station), we knew we must go. Having recently got engaged in Florence, Italy (and being lovers of everything Italian), where proprieter and chef Emily Watkins began her career as a chef, there was no doubt at all that we would fall in love with her food. Emily has also worked for Heston Blumenthal at The Fat Duck, followed by several restaurants worldwide, before opening The Kingham Plough in 2007. The restaurant holds 3 AA rosettes and has a main entry in The Good Food Guide (cooking score 4). Thomas Waller took over from Emily as head chef and has been running the kitchen since April 2017. 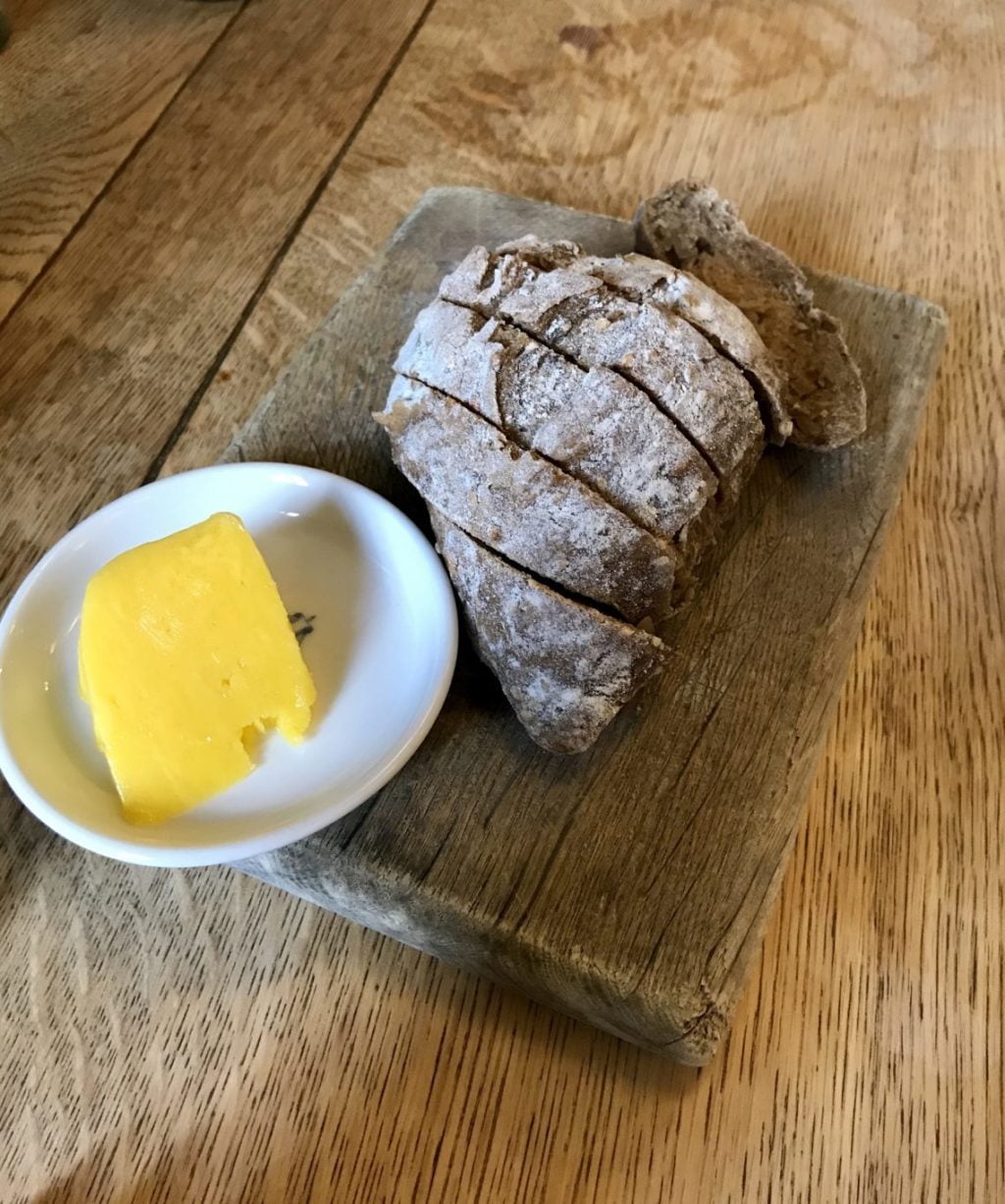 Despite being towards the end of service, the restaurant was still very busy. Our table in the corner was perfect and as we’d booked to stay for the evening, we made ourselves comfortable and were ready to enjoy the ultimate lazy Sunday afternoon. Pre-dinner gin & tonics were quaffed whilst browsing the menu, which had some very creative dishes on offer. There were only 3 starters so this helped our decision making a little easier. Confit of broccoli & walnuts (£8) wouldn’t be by usual choice, but as Mr R had his heart set on the malt & kelp cured Cornish monkfish tail (£10), I thought I’d just give it a go. The other option listed was ‘SaltPig’ Nduja, which having since looked up sounds delicious.

The waitress who took our drinks orders (there were a few) made a real effort to engage with us and even gave us a recommendation to visit Daylesford Farmshop when we told her we were staying for the night. It was Miles (Emily’s husband) who took our food order on one knee at the table, a nice touch which didn’t go unnoticed. The bread that came before our starters was homemade of course, with butter (which was out of this world) sourced from Holmleigh Dairy down the road in Moreton-in-Marsh. The plates were branded with The Kingham Plough’s own stamp; their centres filled with intricate and delicate creations, which almost looked too pretty to eat, arrived in front of us. My broccoli dish was in fact a fine cous cous mould of walnut & anchovy butter and Blue Monday cheese. It was crunchy, rich in flavour, deceptively filling – I could have turned vegetarian for this.

The Cornish monkfish tail looked stunning. The fish was presented as a carpaccio, with seaweed, sea vegetables and tartar sauce. Everything on the plate was tempting to the eye from the offset and oozed finesse, with fine flavours to match. Possibly our favourite of the 2 starters, although I was very happy with my choice.

The main course was non-negotiable. The wild halibut, celeriac & truffle gratin and Cornbury Park venison leg all sounded wonderful, but we were there for a traditional Sunday roast and so, for us both it had to be the rump of Longhorn beef (£22). Our lunch was secured, but we listened as one of the kitchen team came out to the restaurant during service to update Miles that they were down to their last portion of venison. Having worked in the hospitality industry for many years in a previous life, it started to become very obvious to me as to why everything was running like clockwork at The Kingham Plough. They had a team of people who were communicating with each other as a whole; the kitchen was not separate from the restaurant, the whole team were a unit.

Whether this was Huntsham (rare breed) Longhorn beef or not, I don’t actually know, but the beef was absolutely and undeniably outstanding. The meat was finished with a sprinkling of rock salt and hidden underneath were Daylesford greens, red cabbage and a celeriac puree. The Yorkshire puddings were crispy on the outside and fluffy on the inside, one of the secrets to making the best Yorkies are by using the best eggs (they use Cacklebean Eggs, I believe). On the side were crunchy roast potatoes, real gravy and creamed horseradish – we had a second pot of this as it was so good. 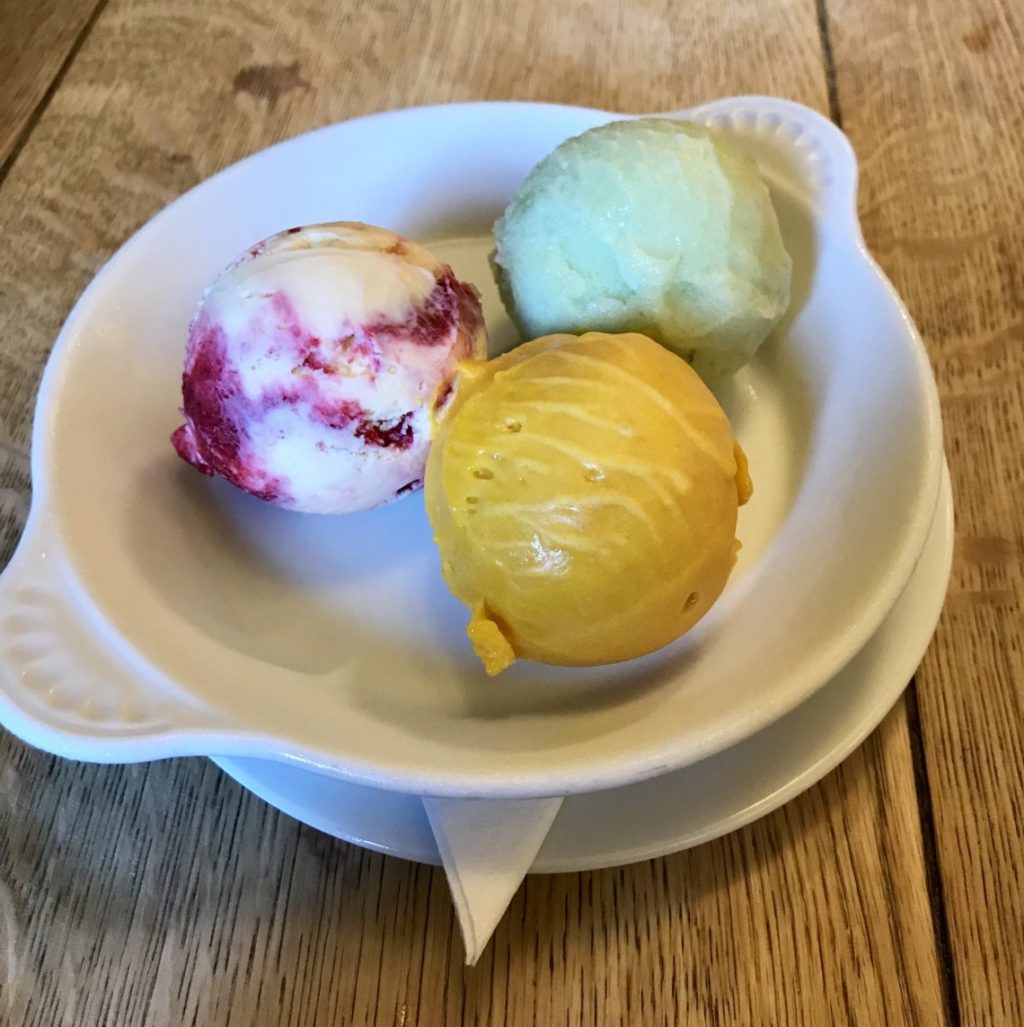 We’d spotted our favourite cheese on the puddings menu (St. Eadburgha), therefore a cheeseboard was imminent, but we were in for the night so agreed that as we’d be essentially skipping dinner a pudding would also be fine. Skipping past the Bramley apple crumble, chocolate orange delice and crème brulee, we opted for some homemade ice creams (£7). Again made with Holmleigh Dairy organic Guernsey milk we chose the Elderflower & raspberry, Earl grey and mango sorbet. Hands down these were the best ice creams / sorbets either of us could remember having eaten. They were the perfect palette cleanser (excuse to have a pudding and cheese), and super yummy – especially the mango. What we didn’t realise at the time is you can even buy a tub of your favourite to take home. 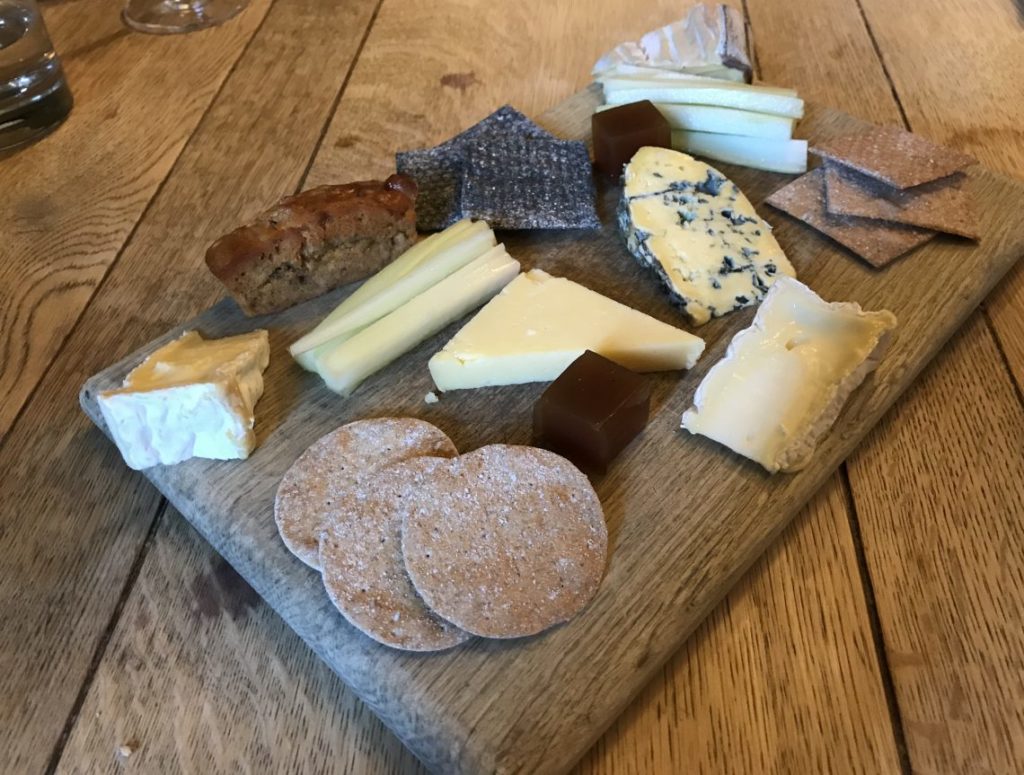 Also on the cheeseboard was a wedge of Rollright, Barber’s 1833 Vintage Reserve and a Barkham Blue, we skipped the goats cheese and asked for some extra St. Eadburgha (£13 for 5). The Peter’s Yard crackers will be featuring on my Christmas food shopping list this year, they were an absolute delight. What I really couldn’t get enough of though was the sticky, moist homemade Earl Grey tea loaf that made an appearance on the board – wow, just wow!

Having made a feeble attempt to explore Kingham for about 5 minutes, we returned back to the bar and spent the evening sampling the wines and gins, and chatted to our hospitable host for the night, Nick. We also had time to acknowledge the numerous awards lining the walls in the bar area, and to appreciate more about the story behind The Kingham Plough’s success of over the past decade. 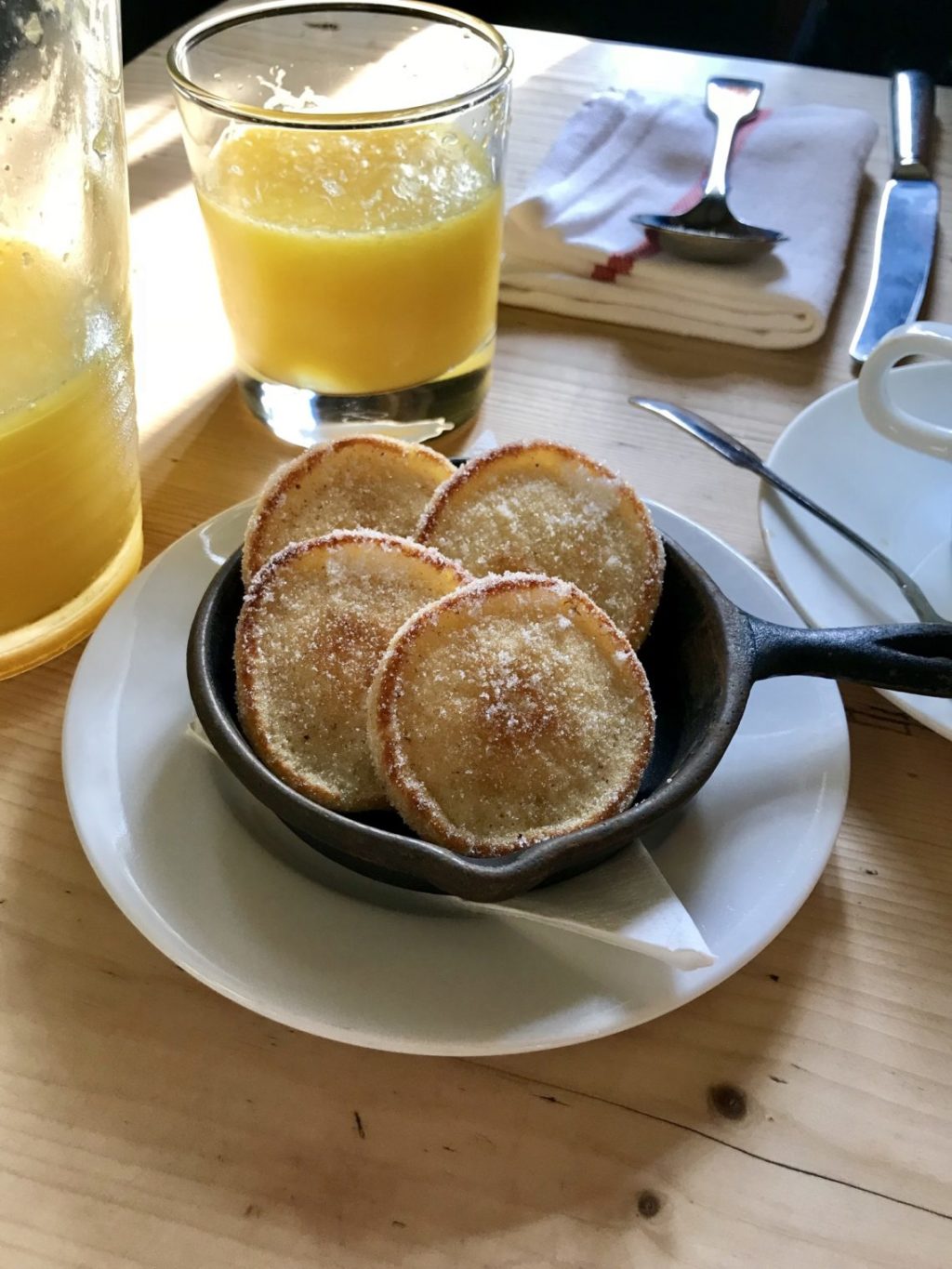 In the morning we stuck around for some freshly made sweet pancakes and an AA awarded breakfast of scrambled Cacklebean eggs, field mushrooms, roasted tomatoes, homemade baked beans and homemade hash brown – it’s a hard life. 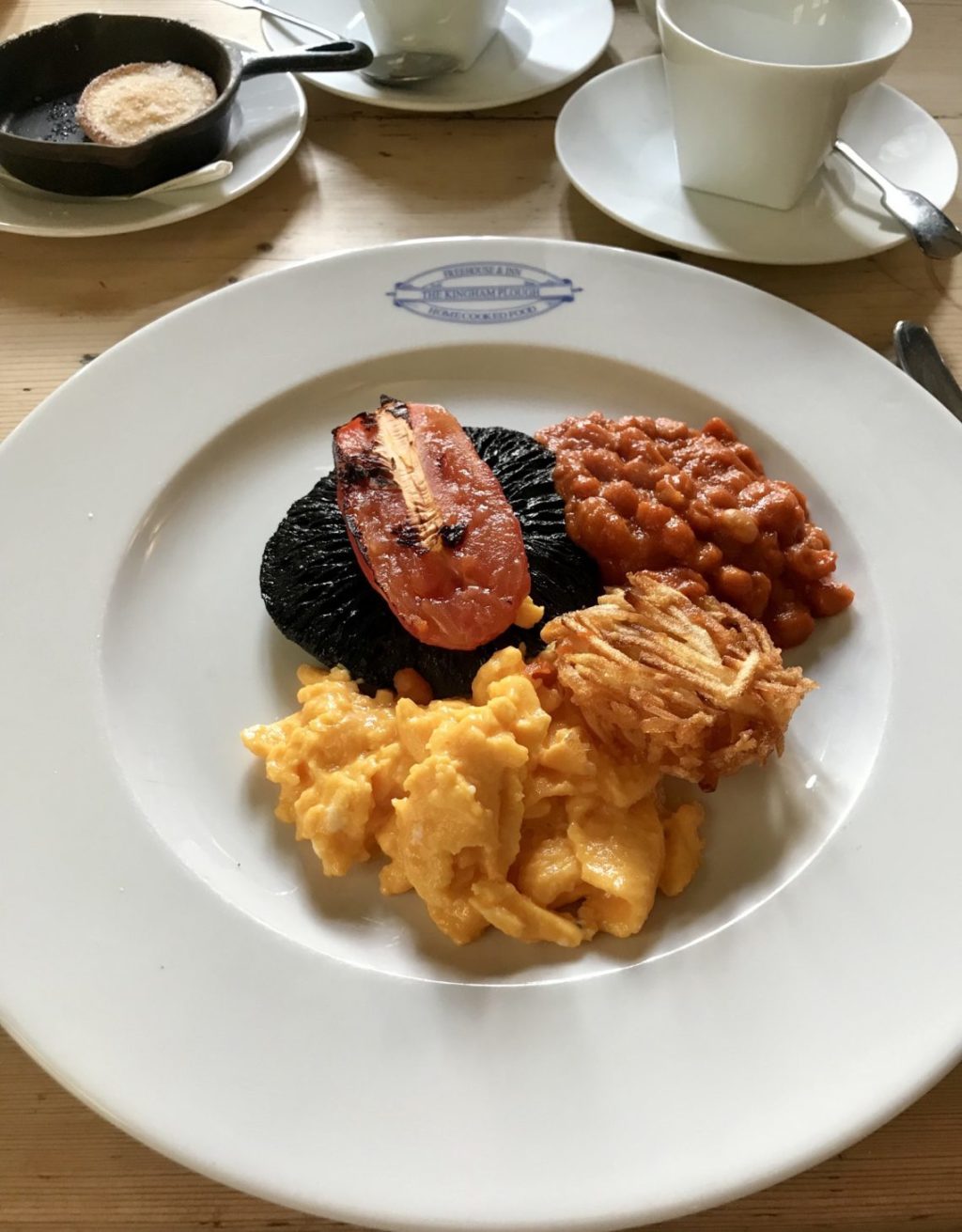