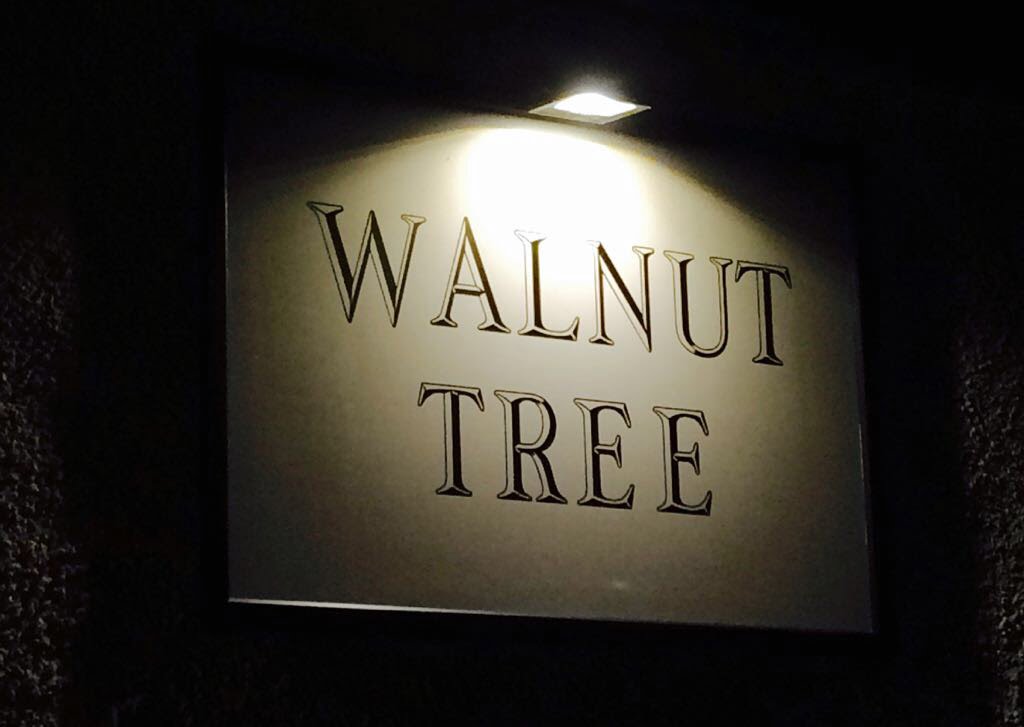 Then there was the lobster bisque, a rich and intense broth with lots of depth and creaminess. If we weren’t in such good company then there might have been a temptation to lick up any remaining bits the spoon couldn’t scrape out of the bowl.

Just as a bit of a recap – Mr R and I recently went on a little Autumn food tour. It began in Cheltenham with dinner at Purslane, we then stopped at various eateries around The Cotswolds to include; The Old Stocks Inn (Stow-on-the-Wold), The Village Pub (Barnsley, Cirencester) and The Kingham Plough (Chipping Norton). We had to pop back home for a day, but our unexpected detour bought us some time to check out a fairly new, local lunch spot and coffee house, Wayland’s Yard in Worcester.

On the last evening of our foodie tour, we had dinner booked at one of the Britain’s most famous Michelin starred restaurants, The Walnut Tree Inn – a gastropub located a couple of miles outside of Abergavenny. Mr R’s brother had met chef Shaun Hill whilst filming for BBC Two’s Terry and Mason’s Great Food Trip documentary (massive name drop). He’d been fortunate enough to have Shaun Hill cook for him at the time and recommended that we visit.

The Walnut Tree has been popular with food critics since the 1960’s, with previous owners Franco and Ann Taruschio making it a household name during their time there of more than 35 years. In 2001 The Walnut Tree changed ownership and received its first Michelin star (chef Stephen Terry, who since left and set up on his own at The Hardwick, Abergavenny), which it held for 2 years. After they made some changes and subsequently began to fall on hard times, new owner Francesco Mattioli and his wife Enrica agreed to feature on Gordon Ramsay’s Kitchen Nightmares Channel 4 TV programme in 2004. Mr Mattioli and Ramsay famously clashed on the show, Mattioli claiming that it was an unfair portrayal of the business. In 2007 The Walnut Tree closed at short notice without explanation.

6 months after its closure, the restaurant was reopened by chef Shaun Hill in 2008 and was named AA restaurant of the year. In 2009 it went on to be named best restaurant in Britain and in 2010 reclaimed a Michelin star. The gastropub is currently ranked as the 20th best restaurant (of 100) in the UK in the 2017 National Restaurant Awards. it holds 3 AA rosettes and has a main entry in the Good Food Guide (cooking score 5).

We stayed at The Angel Hotel in Abergavenny, who arranged a complimentary taxi to take us to and collect us from the restaurant. It was a Tuesday evening at 7:30pm and the car park at The Walnut Tree was completely full, with cars also dropping off guests. As if we would when dining at another other pub, we took ourselves to the bar for our reservation to be acknowledged and then sat down next to the roaring fire. The only difference at this pub being that we were also offered an amuse bouche (a duck hash with plum sauce) to enjoy, whilst we sat sipping on pre-dinner drinks in the bar area. The menu seemed quite simple with the most expensive main courses costing £30 each for the halibut, and fillet & short rib of beef, which Mr R and I opted for. We chose the monkfish (one of Shaun Hill’s classics) and turbot to start (starter prices range from £9-16).

The 2 dining rooms (we were in the back room closest to the kitchen) seat 50 covers, which quickly filled up around us as we snacked our way through some warm crusty bread and a soft brioche. The kitchen door was left open, and I had prime viewing spot from my seat for trying to get a glimpse of what was going on behind the scenes. Something that fascinates me even more since I had the privilege of working in 2 Michelin star kitchen at Le Champignon Sauvage for the day earlier this year.

The experience at The Walnut Tree was much like dining in any other gastropub, rather than the feeling of being in a fine dining Michelin starred restaurant. The service was good, and without any unnecessary stuffiness or over refinement, that can sometimes have an impact on the overall enjoyment of the food. The only slight criticism about the ambience, was that the acoustics in the room don’t hold the sound of guests chatting very well, so it did make it quite difficult to have a conversation over the noise

The starters arrived quickly and our first reaction was of surprise as to how large the portions were. My monkfish with some accompanying vegetables would have been an ample helping as a main course, but we weren’t complaining. The freshness of the tomatoes, with hints of ginger and a kick of chilli complimented the meatiness of the monkfish perfectly, all without overpowering the delicate fish. Similarly with the turbot chosen by Mr R, which was precise cooked and topped with tempura prawns. The seasoning on both dishes was very apparent in a good way, as it married all of the flavours together beautifully. Then there was the lobster bisque, a rich and intense broth with lots of depth and creaminess. If we weren’t in such good company then there might have been a temptation to lick up any remaining bits the spoon couldn’t scrape out of the bowl.

A short while after our plates were cleared, another large portion of fish arrived in front of me. My main course of pan seared fillet of halibut topped with a crispy crab filled courgette flower looked wonderful. It was served along with crunchy green vegetables and a sauce to match in colour. Everything was well cooked and again well-seasoned, and overall a very unfussy plate of food, with most of the effort having gone into the cooking and flavours. The Autumnal season clearly reflected in the beef dish, it oozed comfort with the creamy mashed potato, charred carrot and cabbage which Mr R unashamedly used to mop up the peppercorn gravy and meat juices. The leaner cut of fillet is forever the showstopper with its blushing pink centre, however combining it with the short rib was a clever twist, giving more varied texture and a beefier flavour.

We were full to the brim, but not quite ready to surrender just yet, especially with a lemon pudding on offer. There was a choice of 8 different puddings, all priced at £9 each and a selection of Mons cheeses (Monmouthshire’s?) for £12. We seriously couldn’t manage both, so shared the intensely lemony lemon pudding which was served with a mouth-watering honey cream quenelle and pine nut shortbread. A delicious way to end a superb meal, which we both thoroughly enjoyed from start to finish.

There was time for just one more drink in the bar whilst we awaited our carriage, with an extra special and unexpected finale to the evening, when Shaun Hill came out to meet us. We only chatted for a couple of minutes, before he graciously thanked us for taking the journey over the border to visit the restaurant, before disappearing back into the kitchen – what a guy.