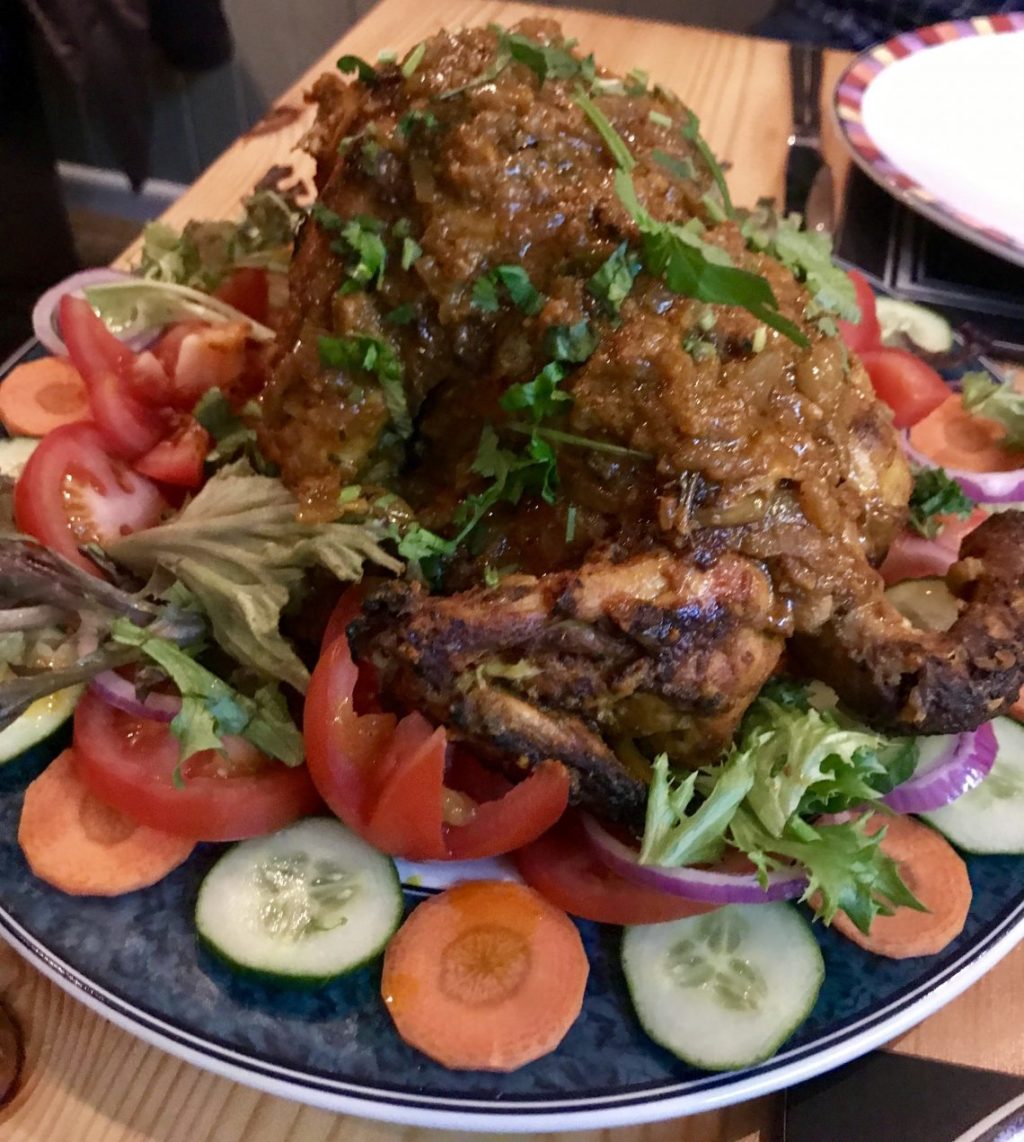 Following our Tuscan break a month later; we went back for dinner at Pundits and shared our exciting news with Sultan, that whilst away we had got engaged….hooray!

Upon introducing Mr R to Pundits in Upton for the first time (when we had dinner there in July), he instantly understood why this was my favourite local Indian restaurant to visit. Owner, Sultan had made us feel so welcome and he insisted we should return very soon. Following our Tuscan break a month later; we went back for dinner at Pundits and shared our exciting news with Sultan, that whilst away we had got engaged….hooray!

Sultan invited us to the restaurant the next week for a celebratory ‘traditional’ Bangladeshi dinner, which was to be cooked by his wife. 5 days later we were sitting back at ‘our table’, ready to sample some authentic, homemade dishes which had been prepared for us.

Almost every time I eat at an Indian restaurant, and have a starter, it has to be prawns on puree. Being a particular fan of Pundits version of the dish, I was delighted when a bowl of prawn puree was served, along with some delicious poori bread. Some homemade Bangladeshi, spiced fish cakes had also been made for us, using a fish renowned in Bangladesh called ‘knifefish’. Sultan told us that this type of fish is very tricky to bone, which is one of the reasons it isn’t seen too commonly in restaurants in the UK. He explained that in Bangladesh, people are more used to eating fish with the bones still present.

Shortly after our starters had been cleared away, we heard big gasps from the surrounding tables. A whole roast chicken on a plate of salad garnish passed through the restaurant, and was presented in front of us.  The show stopping traditional Bangladeshi chicken (a very popular item to prepare and serve during weddings) was covered with a spicy, lamb based sauce. The meat had first been marinated in yoghurt, garam masala and ‘panch puron’ (a whole spice blend, consisting usually of 5 spices). Sultan told us that every chef has their own spice mix, making each one unique…and a secret!

Whilst the chicken went back to the kitchen to be carved, Sultan bought out some more homemade dishes which we had never seen previously on menus. A bowl of curry made with freshwater Tilapia fish was sat in a fragrant gravy of dried mango, garlic, tamarind, lemon juice, grated orange rind and chilli. To accompany the chicken and fish was a vegetable medley of cauliflower, carrot and green pepper, cooked in a thick corn broth. We also had some yummy pilau rice to soak in all of the wonderful juices and flavours.

Unable to eat all of the food which had been an incredible treat for us to feast on, Sultan arranged for the leftovers to be packaged up to enjoy another time at home. We were then offered some refreshing pistachio and mango ice cream, with pistachio parfait triangles (which at first bite I thought was fudge as they were similar in texture). Despite neither of us being pudding people, we happily finished the plate and the last few drops of our red wine, whilst chatting some more with Sultan.

Mr R and I would like to say another huge thank you to Sultan for the thoughtful and kind invite, and for helping us celebrate our happy news 🙂

*Don’t forget to read my previous post following our recent visit to Pundits back in July. I’d also love to hear from you in the comments box below, if you’ve been to Pundits. The restaurant is currently rated on TripAdvisor as number 2 of Worcestershire’s best restaurants!