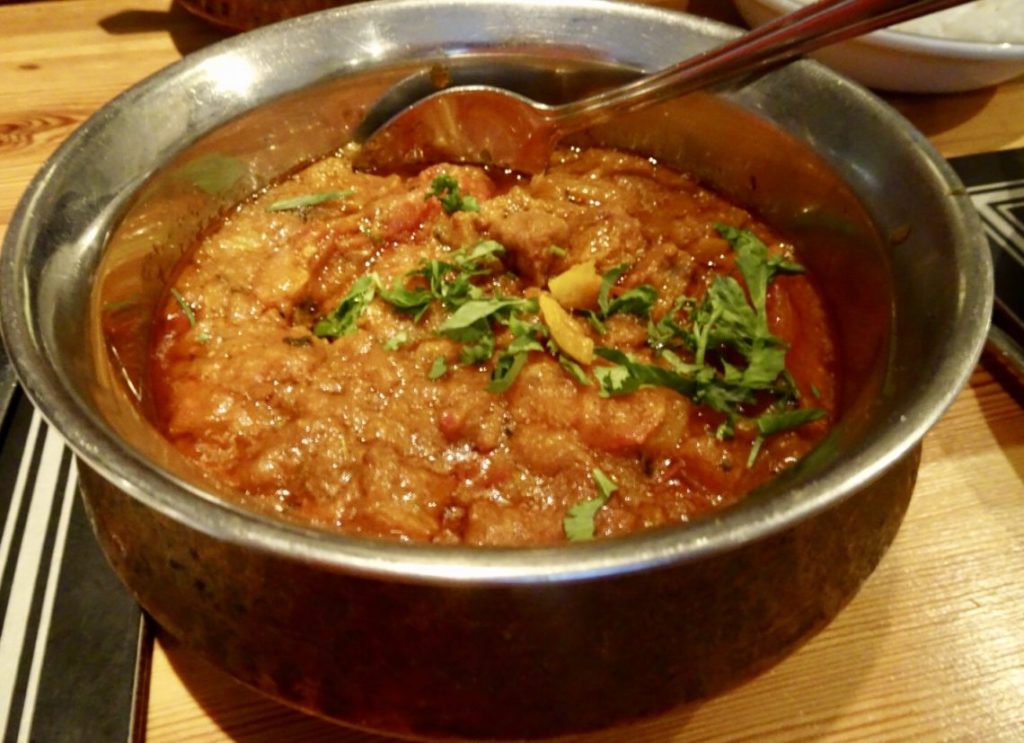 I love Indian food, but I’m not a fan of the ghee and food colouring sometimes used when eating out in the UK’s ‘curry houses’. Therefore I’m always looking for new recipes to cook at home, with some of our regular dishes being tandoori salmon, paneer, coconut and yellow split pea curry, potato and lentil curry, spinach and paneer filo pie, spinach and paneer curry and prawn, courgette and lentil curry. Obviously this generalisation doesn’t apply to all restaurants and certainly not Pundits Fusion in Upton-Upon-Severn, which prides itself on ‘preparing all of their dishes using fresh herbs and spices, never powders, and with no artificial colourings or preservatives.’

Pundits Fusion has been one of my favourite local restaurants to eat in and takeaway, since moving to the area more than 10 years ago. Although food is a very personal thing, there are also certain factors that put some restaurants in a different league from others. What sets Pundits apart from those offering a similar style of cooking and cuisine for me, is partly down to how we are made to feel during every visit. Owner, Sultan knows how to look after his customers, he treats everybody in the same way and everybody is welcome. Although I’ve repeatedly raved on to Mr R about going to Pundits, he had never been. Fortunately we had a chance to rectify that when we found an opportunity to go along with some friends.

We booked a table for the 4 of us at 6:30pm for the following (Friday) night. Mr R and I arrived a little early and were greeted by Sultan. He explained that they had an outside catering event that evening, with 45 covers which the kitchen was preparing for. We were given some menus, popadoms /pickles and drinks whilst we waited for our friends.

When they arrived we agreed to have a starter each, followed by a selection of main course dishes for the table to share. I almost always opt for the prawn puree to start in a curry house and find they do tend to vary quite significantly from place to place. What I like about Pundits’ version is that I’m able to identify fresh tomatoes within a mild, not too spicy sauce. Everything is wrapped up in a light and fluffy, puffed poori bread. Sultan came over to explain that the fish kebabs were made with Knife Fish, imported from Bangladesh, something that we had not been previously familiar with. I also tried a bite of the homemade samosas, which were full of flavour and deep filled with a minced lamb.

We hugely over-ordered on the main courses, especially as we’d not only previously eaten a starter each, but also devoured the basket of popadoms. There was quite a wait as expected due to the kitchen being busy, so we had time to chat and prepare for the feast which included a king prawn dansak, lamb rogan josh, mixed mishty, tandoori platter, Sag paneer, tarka dal, garlic rice with plain and garlic nan breads.

Apart from the platter and the bread, the other dishes unfortunately did arrive a little cold, however it only seemed to be me who really noticed so it wasn’t worth mentioning at the time. It certainly didn’t stop us from heaping large spoonfuls onto our plates in a voracious manner and gorging on the colossal banquet that had been laid out for us to enjoy. Instead of the saag paneer we were given a saag bhajee and an extra mushroom bhajee, Sultan also treated us to some additional tiger prawns.

Placing that bread in front of me was like leaving a kid in a candy store. I don’t recall sharing much of it, although our friend who must have managed to sneak some past me did say that it was probably one of the best nan breads she’d ever had. Come to think of it, she may have a point. The nan had perfectly risen, but still had those slightly crispy edges, with a soft middle, and was topped with sprinkles of salt and small garlic pieces.

Amazingly we did actually eat most of the food, however unsurprisingly there definitely wasn’t any room for dessert. What is it about Indian food that is so moreish and makes you keep eating long after you’ve had enough?

The feedback from our friends who have also eaten at Pundits many times was excellent, and Mr R concurred. We could also hear other customers sitting nearby commenting on how good they thought the food was. One of our friends liked that the kitchen was open so the chefs could be seen cooking, as it brings an added dimension and atmosphere into the already cosy restaurant.

After we’d paid the bill and chatted for a while outside, Sultan popped his head out to us again to introduce us to a neighbour who lives close by. It turned out we already knew him, but he took the opportunity to tell us he too had been coming to Pundits for years and how much he loved the food.

It’s a credit to Sultan and his team, who since opening in 1996 have kept the business open through difficult economical climates as well as surviving some of the worst floods the UK has seen. Pundits is more than just a restaurant, it has a voice amongst locals and the wider community. It continues to be supported by its loyal customers, of whom many have become good friends.