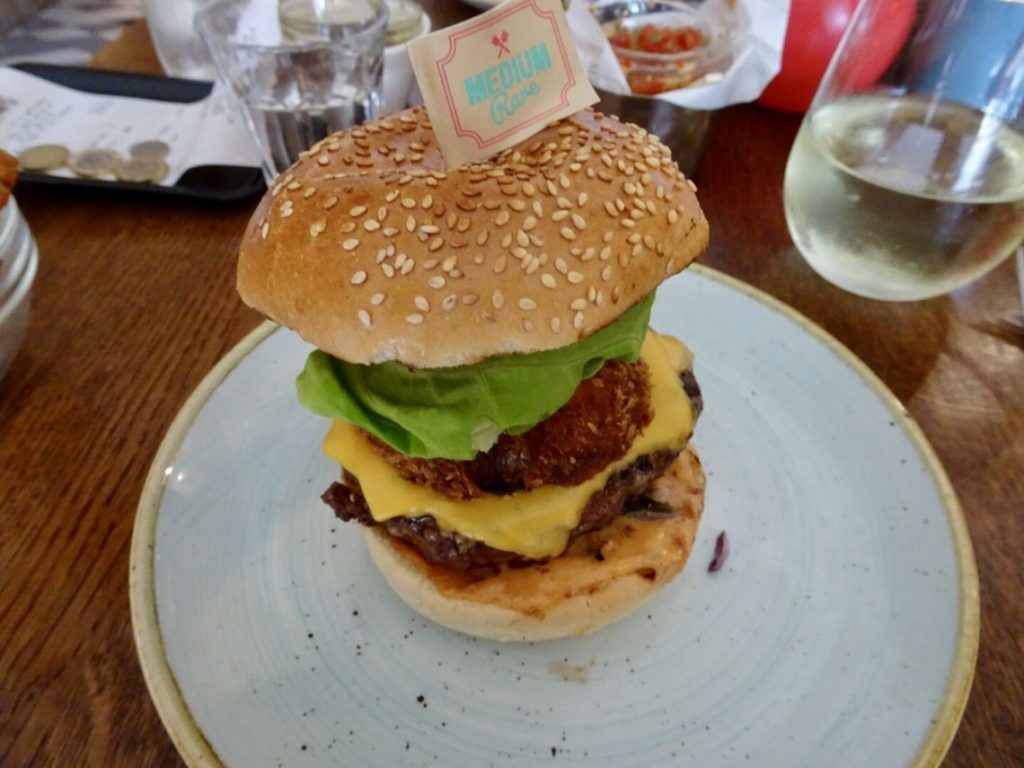 I’ve only been to GBK in Worcester once since the burger chain acquired its new restaurant in CrownGate Shopping Centre in 2016. My recollection of the experience was of it being very busy, when a group of colleagues and I went there for a ‘burger night’, but also that the food had been very good. Similar to the experience of eating at the Birmingham outlet in Brindley Place with my auntie from Dallas, who was as equally impressed as me with the quality of the burgers.

GBK’s ethos according to its CEO Alasdair Murdoch, interviewed by Quick Bite Magazine is… “To offer a real variety of burgers, from vegetarian to chicken and not forgetting our grass-fed beef. We source all our meat fresh, and wherever possible support British farmers, as provenance, as well as freshness, is of paramount importance.
“A huge amount of love has gone into everything – from picking the best buns to keeping our menu innovative and exciting. Simply put we are obsessive about burgers.”

Eating at any particular chain restaurant isn’t usually my preferred choice. I enjoy the variety that local independent restaurants tend to offer to customers with their changing menus, seasonal cooking, fresh produce and the often more personal approach they generally have. That said, there are times you just want to eat somewhere you know will serve good food, quickly and will be relatively inexpensive. This was exactly what we wanted when Mr R and I had a busy afternoon schedule and wanted to stop for a late lunch in Worcester.

GBK seemed to be the ideal option; we both love burgers, I hadn’t been there for more than 12 months and we knew we wouldn’t have to wait around. I sent a tweet asking for recommendations and GBK replied directly to me, giving a shout out to their Big Mouth special and mango milkshake. I downloaded the GBK app which allows you to order and collect at selected outlets, earn rewards, get free stuff, take on challenges and more.

It was about 2:15pm when we got to GBK Worcester so the restaurant was mostly empty. This was great because it was more than 30 degrees outside, and we really just wanted a relaxed lunch without the hustle and bustle of the world around us. After being greeted at the door, we sat down and noticed the board on the wall which mentioned the ‘Big Mouth’ special we had been told about.

Mr R fancied a glass of white wine to cool down, but I’d got my heart set on the mango milkshake, it sounded so refreshing. I actually couldn’t spot it at first on the menu so I was glad the summer special had been recommended to me or I wouldn’t have discovered it. *On the paper menu it’s in a box above ‘milkshakes’. We were also given a separate lunch menu (available until 5pm, Mon-Fri) where you can chose from 4 different 4oz burgers with a choice of 1 of 5 sides (from £5.95). This also comes with a 15 minute guarantee – great if you’re in a hurry.

It’s usually pretty easy to order a couple of starters to share as Mr R and I like much of the same things. We both wanted to try the while you wait grilled halloumi bites and the tempura wasabi king prawns. Moving on to the burgers, although I’d had it before I opted for the ‘Major Tom’ (30 day dry-aged steak patty, blue cheese slaw, crispy bacon, Red Leicester cheese, beef ketchup, dill pickle) and Mr R decided on the ‘Taxidriver’ (American cheese, house onion ring, Cajun relish, smoked chilli mayo, dill pickle, salad). Obviously you can’t order a burger without fries, so we got a side of sweet potato fries (with baconnaise) and some truffle cheese fries.

It’s a good job Mr R has a good memory as he had to relay all of this at the counter where he was served by Lawrence. Shortly afterwards we were sipping on wine and a mango milkshake, and finally cooling down from the oppressive humidity from the summer’s heatwave. The milkshake came in a large metal cup to keep it cool and was filled with chunks of mango, similar to mango ice cream or sorbet. It was thick, sweet and moreish, absolutely divine in fact. Thanks for the recommendation GBK Twitter tweeps!

Even though we didn’t order from the lunch menu, our starters arrived more or less 15 minutes after placing our order. The halloumi bites come with a pot of GBK’s signature kiwifruit & habanero hot sauce, which if you haven’t yet tried, is a must. The thick, green hot sauce punches out flavours of kiwi and honey. The tempura wasabi prawns were crispy and we could definitely taste the wasabi in the light batter. They tasted even better dipped into the fresh salsa sauce that accompanied them. Lawrence who was now our waiter asked if we liked the prawns as they happened to be a personal favourite of his, and we could absolutely see why.

The burgers arrived immediately after we’d finished the last bite, along with the fries and baconnaise. Lawrence asked if we’d like to try any other house sauces and recommended the sriracha mayo. We dipped our truffle cheese and sweet potato fries into both of the creamy mayo dips. The sriracha had quite a mild taste at first, but then the chilli kicked in a few seconds afterwards, leaving behind a pleasant but warm sensation on the tongue. Baconnaise was exactly as it sounds, bacon mayonnaise. Again, it was thick and creamy with small chunks of bacon mixed in, both were really good.

The burgers were piled high. Mine, (Major Tom) with a thick steak patty in between the seeded bun. The meat was juicy and cooked exactly how I had asked, medium-rare. I checked in with Mr R and his ‘Taxi driver’ was nice and pink (as pink as they allow in a chain restaurant) and we were both really impressed. The beef ketchup on the ‘Major Tom’ was a welcomed change from the classic tomato ketchup. It had a similar colour, texture and smokiness to barbeque sauce and very much had it’s place on this burger. I love bacon, but only if it’s crispy, and this was. I maybe didn’t notice the blue cheese in the slaw, but I loved the crunchy texture that it added to the burger and I didn’t have to ask for a dill pickle as it was part of the stack, so this was just a bonus for me. The red Leicester cheese was melted on top of the patty and oozed out in the seductive way that only melted cheese knows how.

Both burgers were quality, really filling and great value for money. We chatted more to Lawrence afterwards who was clearly very happy to be working for GBK. For a moment there, we may have even forgotten we were sitting in a chain restaurant.

My only other comment would be that as payment is made in advance for food and drink at the counter, gratuities for staff and service may easily be forgotten. It only occurred to me when I looked at the receipt back home that service is not included. It seemed a shame because we were looked after so well by Lawrence and would have left a tip at the end of the meal with the bill as we often do. On this occasion Mr R ordered a second glass of wine, paying at the table and left a cash tip at that opportunity.

2 ‘whilst you wait’ starters, 2 burgers, 2 sides of fries