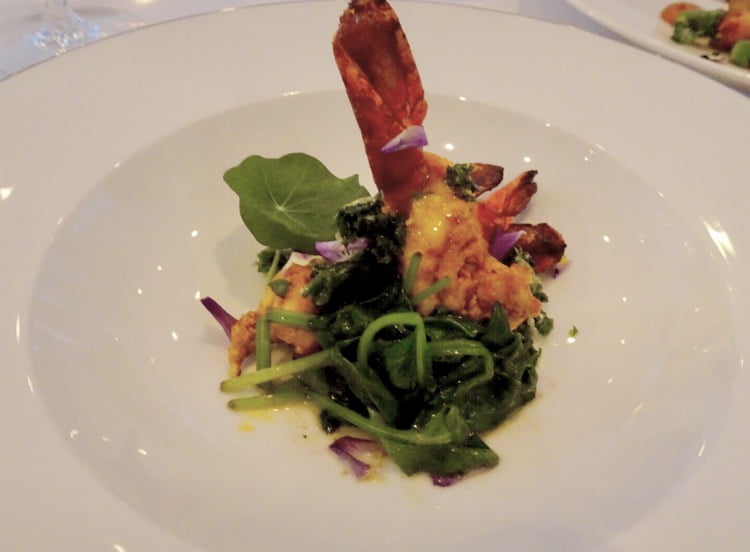 Our prior visit to Cheltenham back in March took us to 2 Michelin star restaurant Le Champignon Sauvage. After lunch we wandered into town along the Bath Road and stumbled across a wall plaque which read ‘Brian Jones lived here for a time in 1962 before later moving to London to form The Rolling Stones’. As Mr R and I were reading we realised the building was currently occupied by a restaurant. The menu sounded mouth watering and hinted at being French- Indian fine dining cuisine. This was definitely not a traditional ‘curry house’. When we got back home and made some enquiries to get a reservation they were booked up for weeks in advance for dinner.

A few days later and by coincidence a colleague asked me if I’d eaten there, he had lunch booked in May with his son visiting from new York. The feedback from him was that ‘the food is exquisite’ and he urged me to go. Prithvi is clearly a very popular restaurant and probably one I should have heard of before now.

Since opening in 2012 the restaurant has received some fantastic press, more recently in particular. During national curry week in 2015 The Sun newspaper named Prithvi the best ‘curry house’ in the UK. The following year The Telegraph’s article listing ‘Britain’s top 20 curry restaurants’, included Prithvi among the very best. The feature went on to mention an interesting fact that there are more than 12,000 curry houses in the UK. This does give quite some perspective, although defining Prithvi to be a curry house is certainly questionable. Even more impressive though is that the fine dining restaurant, now in its 5th year has continued to hold onto its 5 star rating on TripAdvisor.

Prithvi Restaurant has an Open Table reservations option on their website. (Open Table named Prithvi their #1 ‘Fit for Foodies’ restaurant in 2016). We hadn’t attempted to book for a couple of months, until Mr R decided to have a look on the off chance and managed to secure a table for the 2 of us on a Thursday evening. Subsequently Prithvi came up in conversation yet again, this time with 2 local chefs who asked if I’d been. Their tip was that although you would never usually order dessert in an Indian restaurant, at Prithvi you really should.

There is a car park situated directly opposite, lucky for us as it had been raining when we got there. The facade of the building is quite unassuming although somehow added to the charm. Stepping through the front door and immediately into the bar area, we were greeted by Jay Rahman, Director at Prithvi and taken by him straight to our table. An aperitifs menu was handed to us listing a selection of interesting gin cocktails, including a non alcoholic option (Mr R took one of those as he was designated driver). Champagne was also available on the other side for the non gin drinkers or indeed for those celebrating.

Whilst sipping on our drinks (mine an alcoholic Ferdinand’s Saar dry gin from Germany; mixed with aromas of pine and juniper, pungent lavender, lemongrass, lemon meringue, vanilla and coriander) Mr R and I sat eagerly awaiting what was to follow. Jay Rahman came back presenting us with the dinner menu which offered the choice of a 5 course tasting menu (£48 pp) or the al a carte menu on the opposite page. From the al a carte we opted for scallops and king prawns to start followed by the lamb and cod.

Shortly after ordering we were given an amuse bouche presented in a small glass jar with a teaspoon. Inside was a refreshing mix of coriander, pomegranate and chilli complimented with a sort of bahji in the middle and topped with a mint and yoghurt dressing. It made us think ‘papadums’, which were exactly what came out next. There were 3 triangular, perfectly crispy papadums accompanied by a beetroot and horseradish relish and a creamy mint and yoghurt dip. Now they were really spoiling us as yet another pre dinner taster was brought out. This time we received 2 round pastry balls which our waiter told us to eat in one go. We bit into the light, thin pastry. a surprising explosion of intense yet delightful flavours instantly burst to awaken our taste buds. One of the things we loved was that the chef hadn’t been afraid to use chilli so they left behind a pleasant and fragrant heat in our mouths. 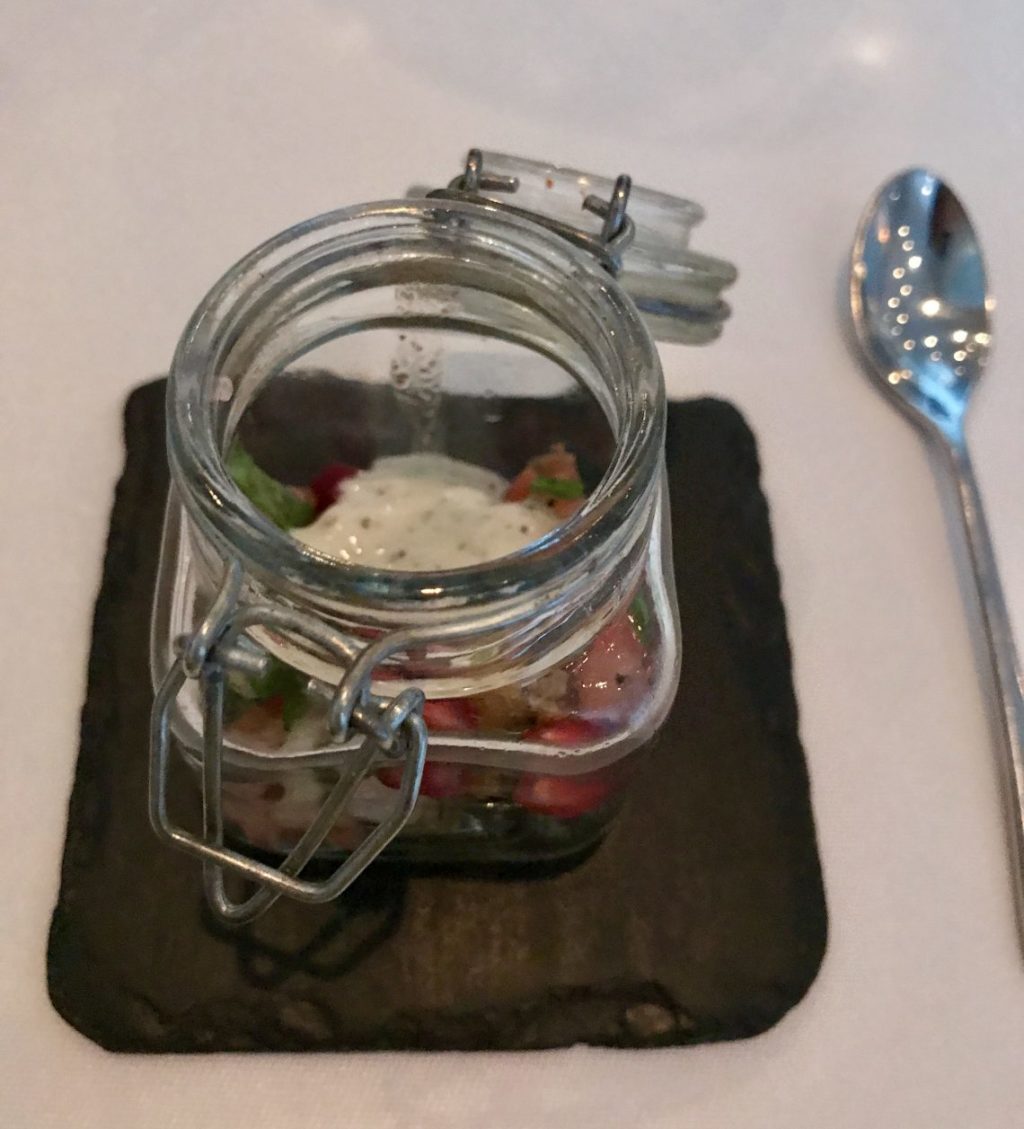 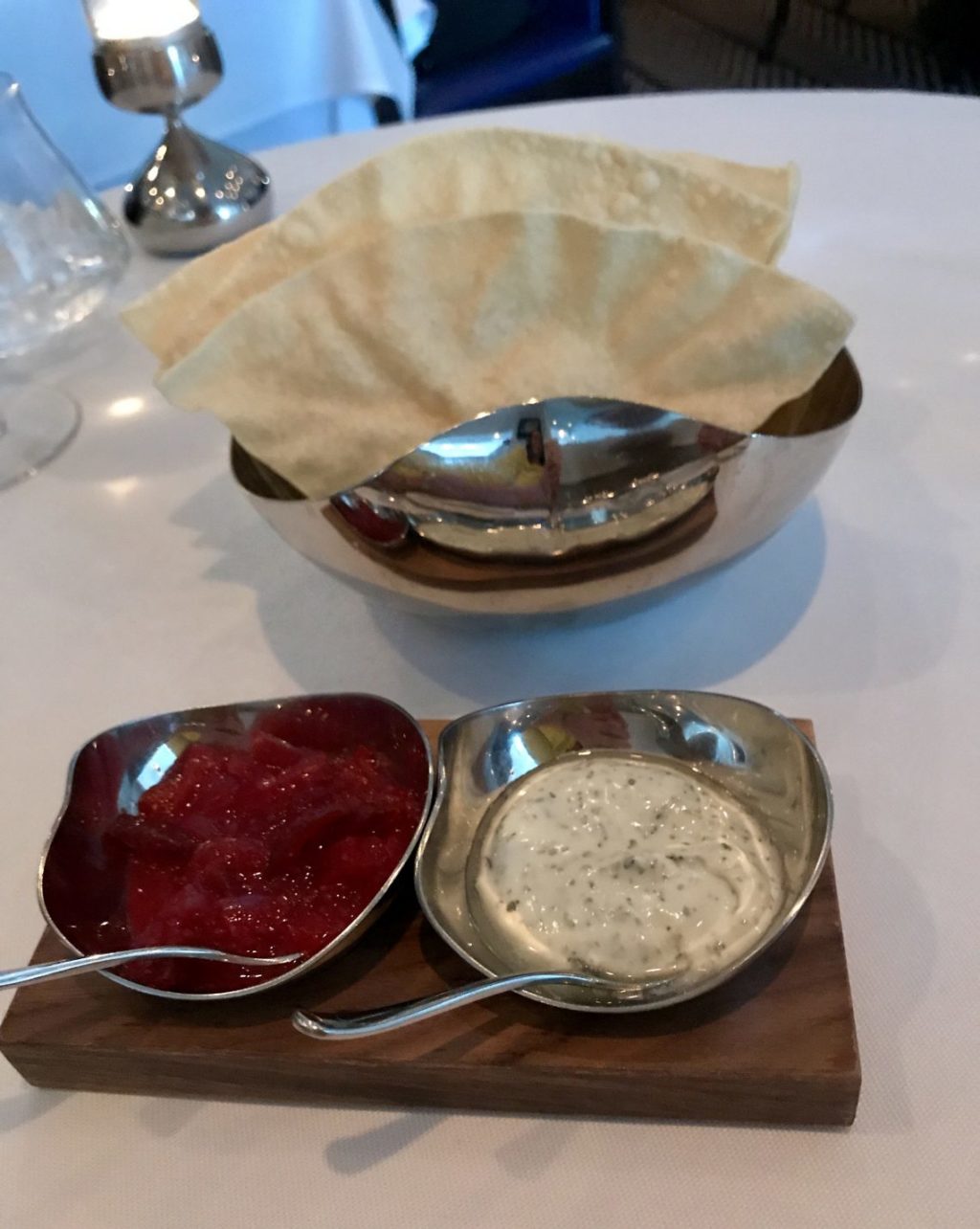 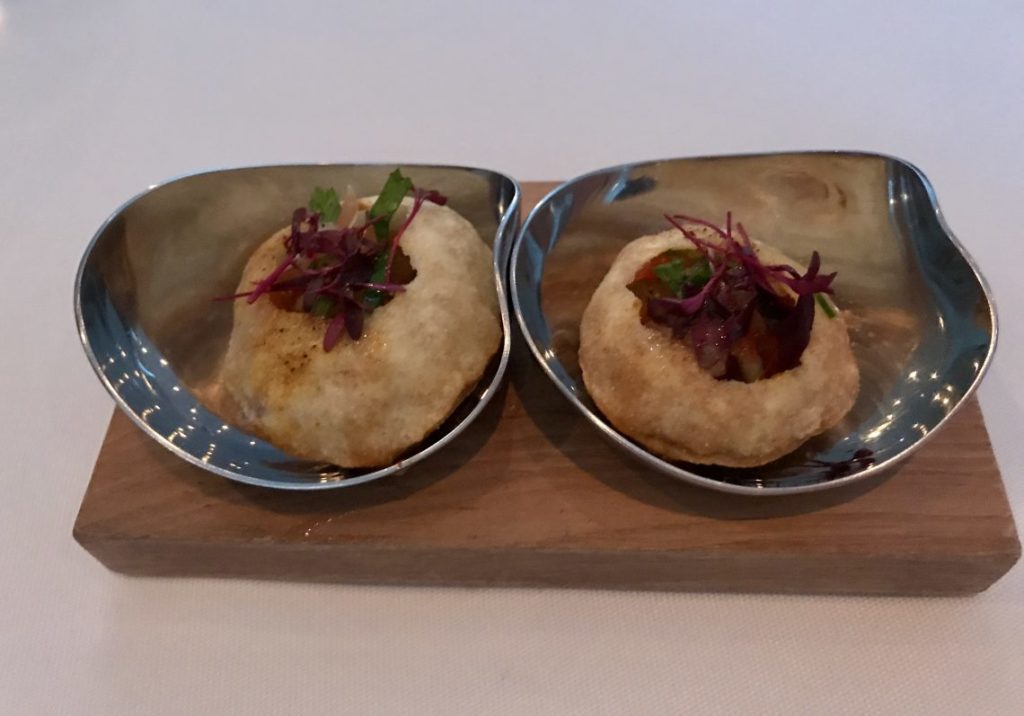 The starters were stunning both visually and in terms of execution. I’d have though that the strong curry flavours and chilli would have over powered the delicate scallops, but it didn’t. All of the food was presented as you’d be used to seeing in fine dining and dare I say Michelin starred restaurants and frankly the cooking was firmly in the same league. 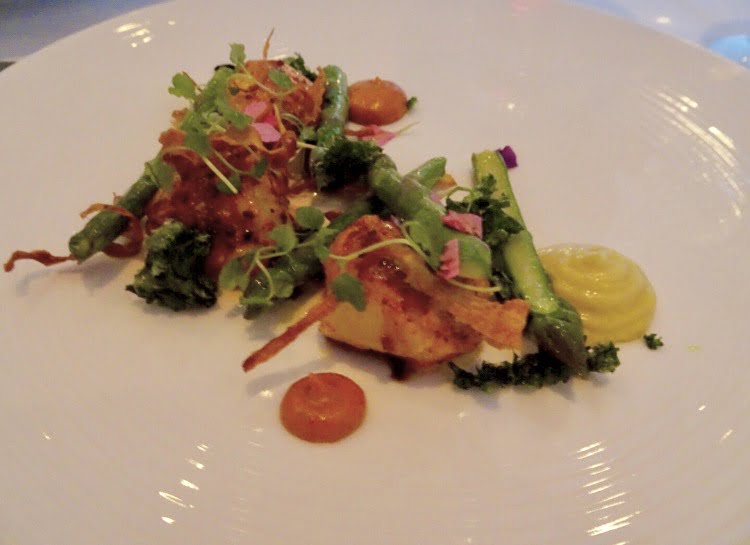 The lamb was plated separately from its accompanying reduction, served in a small copper pan, as were the lentils and aubergine side dishes. It was cooked on the pink side, tender and served with fresh spinach. Just think the best lamb sagwala you could wish to eat! Again there was some heat to the jus surrounding my cod, which was also exceptional by the way. The rice was light and refreshing, finished with lemon zest and chives. The food was indeed rich and filling, but didn’t make us feel heavy like we often do after eating in traditional British Indian cuisine ‘curry houses’. 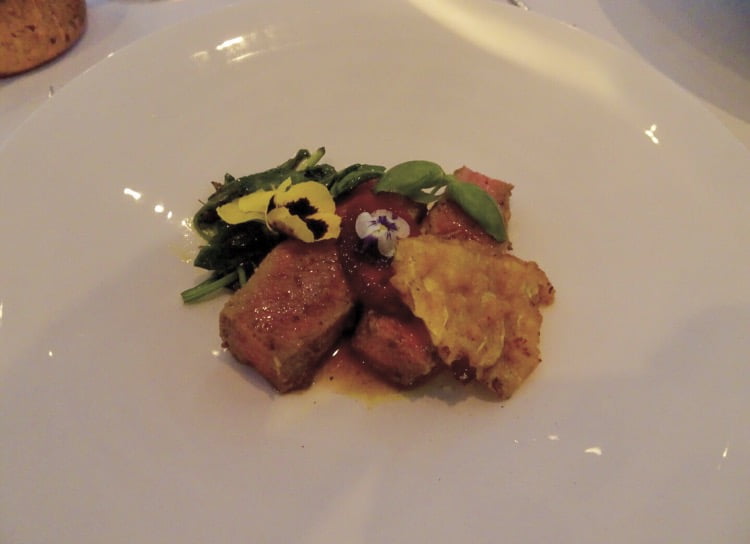 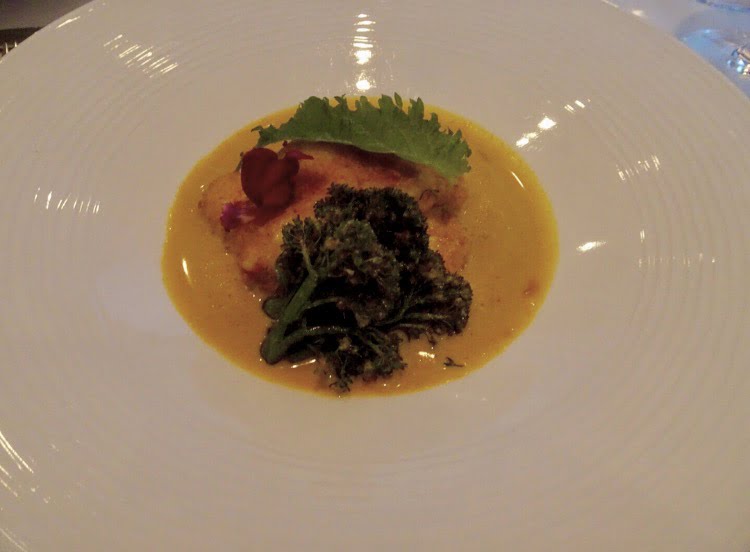 A minor point that occurred to me whilst we were pondering over dessert was around the etiquette of eating the side dishes or ‘accompaniments’. We spooned them onto our main plates which made the practicality of the eating a little tricky to manoeuvre. One of the ways I’ve seen restaurants deal with this, more specifically in the US, is to offer a side plate, which may or may not be appropriate at Prithvi. It may very well also just be me who gets themselves into a mess. That aside, the attention to detail didn’t go unnoticed. The waiting staff in particular who wore white serving gloves and meticulously redressing tables, which also involved ironing the fresh table linen.

Anyway we did order dessert, we agreed on the chocolate delice to share. As prewarned the desserts really were a must. The delice was rich, velvety and chocolatey with a fudge like texture that melted in the mouth. Spots of marmalade jelly and perfectly placed scatters of chocolate rocks were the ideal partners for this dreamy pudding dish. A final treat was left for us in the form of handmade truffles and pistachio biscuits to follow. 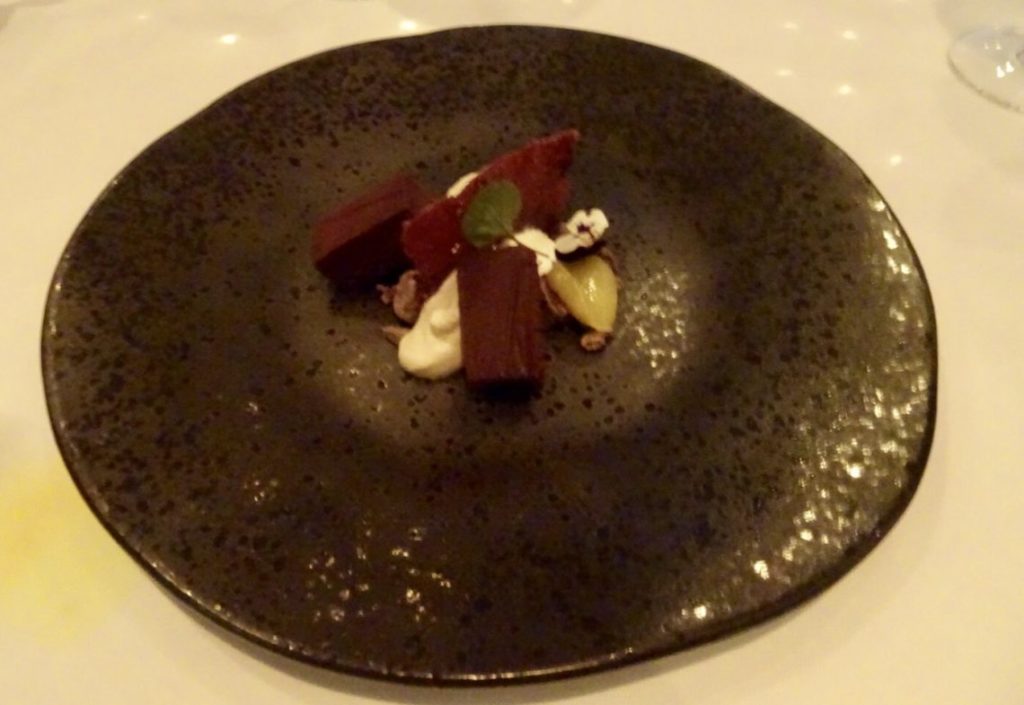 We chatted for a while to various staff members who were keen to ask our views on our experience of the evening. It was also lovely to overhear other tables commenting as they were leaving on how much they loved the food and enjoyed their visit. A thought provoking question from one of the waitresses who asked if we’d eaten anywhere that was similar to Prithvi before. Neither of us could recall having been anywhere we felt able to compare.

Prithvi Restaurant have made it to the finals of the Gloucestershire Muddy Stilettos Award for Best Restaurant 2017 (voting closes on Wednesday 14 June at midday). They’ve got my vote!