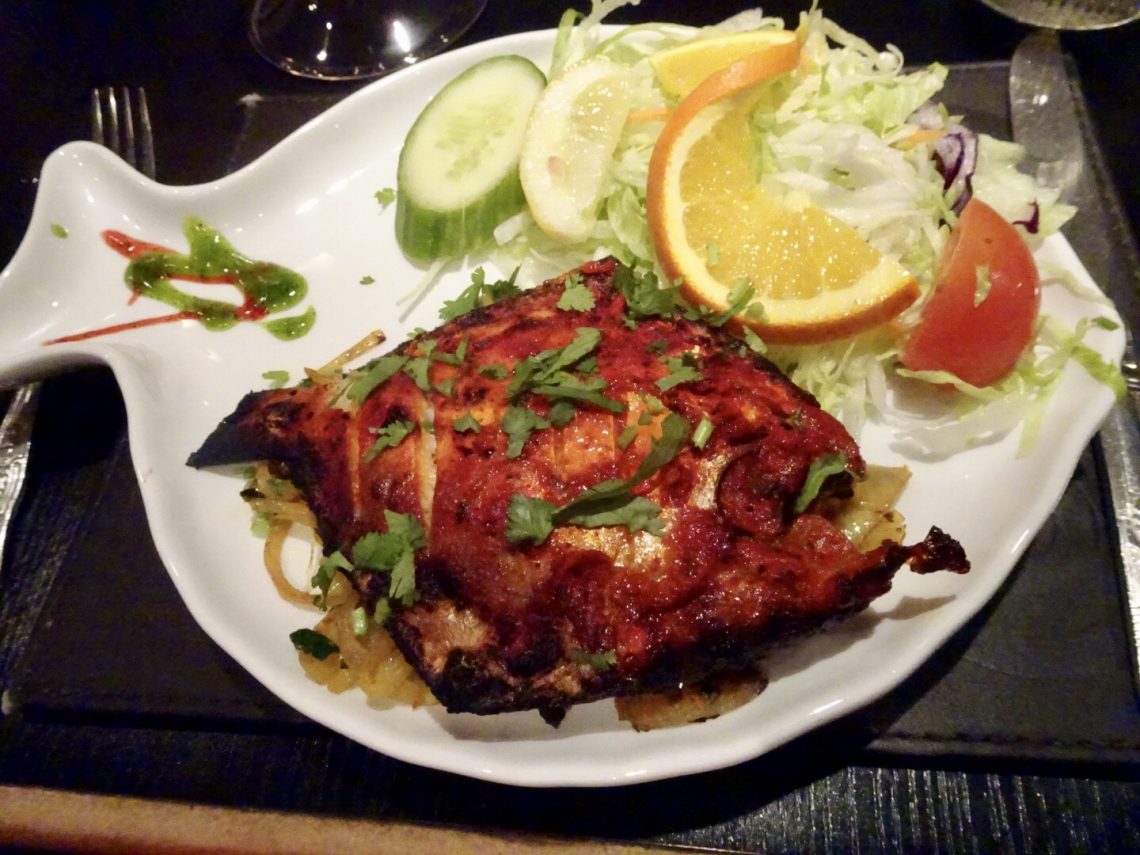 On a Monday evening living in the Worcestershire countryside, the options of where to meet friends for dinner and a catch-up are beyond limited. Everywhere is closed! Our friend’s Michael and Amy were travelling from Malvern to meet us and Upton-Upon-Severn seemed to be the obvious choice. The only place we could think of was Thrishna, so our group of 6 headed to Upton and piled in to the Bangladeshi / Indian restaurant for an early dinner. It was probably back in 2007 when Thrishna first opened that I last ate there, but heard from the rest of our party who’d been there recently that the food was good.

At 7pm when we arrived there was only one other table of 4 seated in the restaurant. We were greeted by the friendly staff who pulled tables together to accommodate our slightly larger group. We were given leather bound menus which had seen better days, but did still did the job. There was lots to choose from on the extensive list, including a set menu for 2 people (£24.95) and 4 people (£49.95) should you need some help to decide. Drinks and poppadoms were organised and brought to the table, accompanied by the inevitable spinning tray of condiments and sauces. These were actually pretty good and so were the poppadoms, which were crisp and tasty unlike some we’ve had recently in other Indian restaurants locally.

Three of our six chose the same starter of king prawn puree followed by the tandoori chicken tikka main course. The other starters included a Shami Kebab and a slightly more adventurous option of the Roopchanda fish. We did wait a good 45 minutes for the starters to arrive but when the food did come it was piping hot, fresh and everyone seemed to be happy with what they’d ordered. The fish looked fantastic, it was presented on a ceramic fish shaped plate and Michael who ordered it said it was excellent. It was now past 8pm and the restaurant was filling up. Another group sat down opposite, I think there were 8 or 10 of them. A table of 4 next to the group and another 2 tables next to us. Could there be a potential demand for restaurants to be open on a Monday in south Worcestershire?

Despite being much busier now, there didn’t appear to be quite such a delay between finishing our starters and the main courses arriving at the table. Some dishes were sizzling in skillets and served by the waiter onto plates and a couple were presented in traditional metal Balti dishes. We ordered 2 vegetable side dishes to share amongst the table and 3 plain naan breads. Taking on a main course each and whilst still digesting our more than ample sized starters, it was a struggle to get through all of the food, despite our determination. The tandoori chicken that 3 of us were working our way through was cooked in a mildly spiced tikka paste and still moist. I tried some of Amy’s chicken korma which she said was one of the best she’d had. It was creamy but not too rich, I compared it’s taste to eating a pina colda – which is no bad thing. Michael ordered something hot, he was at the other end of the table so not sure what it was, other than it was very hot according to Amy who had a sneaky taste whilst he was at the bar ordering more drinks. Mr R was happy with his chicken joypuri, one of Thrishna’s house specialities and we both thought the side dishes were really good too.

None of us could eat another mouthful and at this point our waiter started to clear the plates. There was a whole naan bread untouched which I couldn’t bear the thought of leaving behind. My Dad tore a corner off. I couldn’t resist and had to do the same, dipping it in to the garlicky tarka dhall that was left over. Now I surrender.

Wiping our mucky hands and mouths on the hot towels and finishing off with an After Eight mint chocolate, we chatted away comfortably in the restaurant until past 10pm. Well done Thrishna for opening on a Monday, next we’ll be back to try one of your takeaway’s now that we know you also offer home delivery.