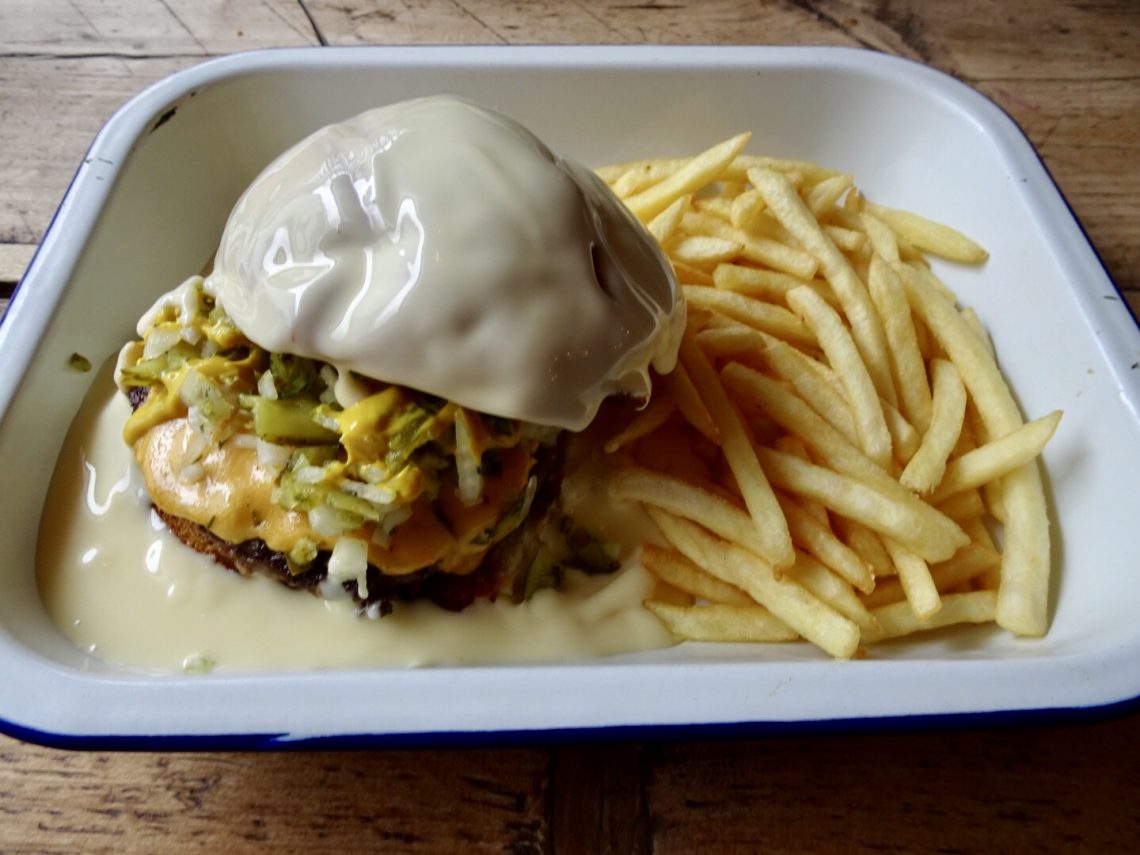 Meatcure hadn’t been on my radar until last month when we walked past it during a brief visit to Leamington Spa. My boyfriend had been before and told me I would love it, we looked at the menu when we passed and I since mentioned it to a friend who lives in Leam and she demanded I should go. We had an opportunity to go back to Leamington a few weeks later after being invited to review another local restaurant. We decided to stay over and have lunch at Meatcure the next day.

It was the Saturday morning following the night before and we were both starving! We arrived at Meatcure just after midday and I already knew what I wanted to order before looking at the menu. I’d been following them on Facebook and Twitter for a couple of weeks, a new special had been announced the day before… the ‘Inglorious Basterd’ (sic)burger!

Meatcure had that industrial look / feel to it like many burger restaurants seem to be going for at the moment with the food being served in trays – all very trendy. We sat down at a large wooden table and our waiter bought us some menus. No mention of the special anywhere so I waited for him to come back to ask if there was one on. Unfortunately he didn’t seem to have been briefed but thought there might have been a new special so went away and came back to tell us they had what was essentially the Royale with cheese, which had melted cheese poured over it…aka ‘Inglorious Basterd’. I probably would have ordered the Royale with cheese anyway, but thought the idea of having my burger bathed in melted cheese sounded like a bit of fun. So did my boyfriend, we ordered the same. We also took a couple of sides, the jalepeno bites and the beer battered onion stack.

We didn’t sample any of the beers this time, I had a gin & tonic and Mr R was the designated driver. At this point the restaurant was very quiet, I think they start serving the lunch menu from 11:30am. Our burgers came out to the table and it was actually quite shocking to see a burger just sitting there covered and surrounded by a pond of white cheese sauce…a burger lovers idea of heaven. Cutlery was compulsory to take this thing on, although getting messy was inevitable regardless of how you decided to approach it. Then the sides came out, which at this point we realised we really didn’t need. Glad we ordered the jalepeno bites though, they were spot on and that blue cheese sauce…wow! Back to the burger; if I go back to Meatcure I’d definitely order the Royale with cheese again, it was a great burger. The meat was quality, still pink and juicy and had all of the components I look for in a burger. I probably wouldn’t need the cheese sauce again, but as a self-proclaimed burger connoisseur I had to try this at least once in my life! A fun gimmick, but probably would have been even more enjoyable if the cheese had been warm, actually I may have just got in there with the burger and had a swim with it.

Suddenly we noticed the restaurant was pretty much full, this was clearly a very popular lunch spot for the people of Leamington. I can see why too, the burgers are really good and the menu was fairly priced as well as offering a lunch time deal which is available Monday through to Friday. We also enjoyed the sense of humour portrayed in Meatcure’s marketing from the risky burger names for their specials and the quirky message on the bill to the profound postcard left on the table with your receipt. Nice work Meatcure.

2 burgers (special’s) and 2 side orders