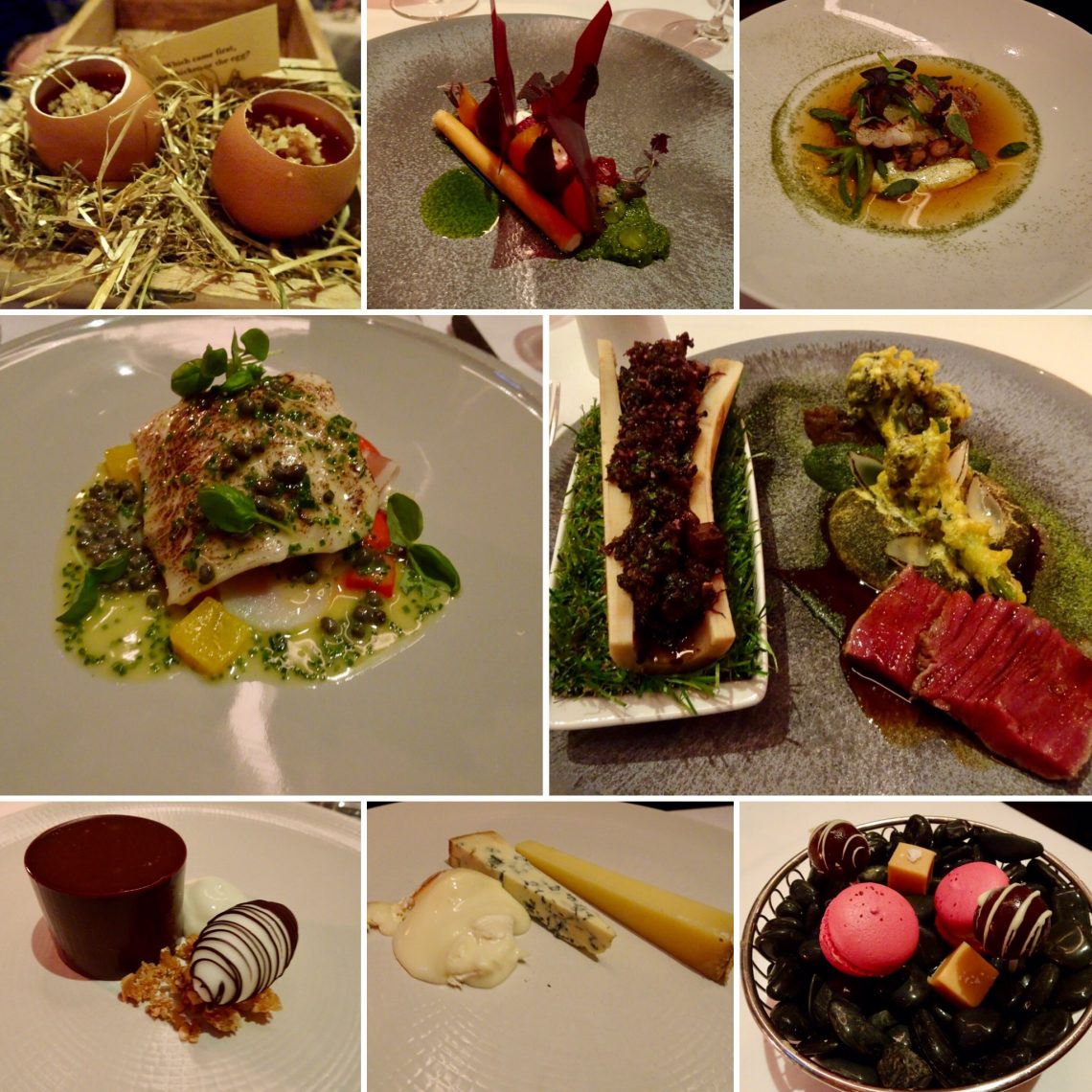 I received an invite from Restaurant 23 & Morgan’s Bar’s Events and Marketing Manager asking if they could introduce me to their new menu created by their new Executive Chef Curtis Stewart. We booked a hotel in Leamington on a Friday evening so we could make the most of sampling the cocktails as well as the wine with our dinner.

We were greeted at the door and welcomed into a stylish hallway where we were asked if we’d like to go upstairs to Morgan’s Bar before sitting down for dinner. We were taken straight to the bar and sat on the stools whilst having a look at the cocktail list. I looked around and even though it was only just after 7pm the cosy looking sofas were full of people drinking and chatting and there was a great atmosphere to the room. Even though the décor had a country charm about it, the dim lighting and music reminded us both of being back in a swanky hotel bar in New York.

I was drinking bellinis in Harry’s bar in Venice a year ago to the date. Feeling nostalgic and reminiscent of Italy I ordered a bellini, my boyfriend had a Campari and soda. The restaurant’s hostess came back up to the bar with menus for us to peruse whilst we sipped away at our delicious drinks. Everything sounded wonderful on the a la carte menu, we just had to pick something. I usually like a seafood or light starter and as I don’t eat squid or octopus I opted for the beetroot. My boyfriend loves both so he chose the squid and octopus in consommé. I then went for the Brill and he eventually decided on the beef.

We had another cocktail each in Morgan’s Bar as were enjoying relaxing and unwinding from the week. Our host came to get us, took our drinks and showed us to our table downstairs. The restaurant was busy and we were seated at the back so could see everything that was going on. I have worked in restaurants so love to watch the process of people being served to the reactions on their faces when a beautiful plate of food is put in front of them. The Sommelier showed us our wine and opened it to breathe whilst we finished our drinks. We then met the restaurant manager Eduardo, who introduced himself to us and was every bit as friendly and welcoming as his colleagues had already been towards us.

Our amuse bouche was the first teaser of what to expect to come from Chef Curtis Stewart’s kitchen. A little brown box opened with 2 eggs sitting inside amongst some straw, revealing a little message ‘what came first, the chicken or the egg’? It was a delightful chicken liver pate with what I think was a marmalade centre to look like the egg’s yolk. We spread it onto the lovely fresh, granary bread and when we were done we finished the bread with the most incredible and inspired marmite butter! Our starters followed shortly afterwards and looked like a different piece of art from each angle, hence why I’ve included 2 of each in the photos below. My beetroot starter was fresh, colourful and the different textures of each element complimented the flavours of the dish perfectly. Even though I don’t eat octopus or squid, I tried my boyfriend’s starter and it would seem that I now eat both. There was a dusting of seaweed powder which he asked me to mention in this write up as in his words ‘it was pretty special’.

We were just finishing our starters but already getting excited about what might be coming next. We weren’t disappointed as our main courses looked every bit as stunning as their predecessors. My Brill was one of the most beautifully cooked pieces of fish I can remember having in quite some time. The red pepper sauce that came with it not only looked good but accompanied the fish wonderfully. My boyfriend’s fillet of beef was rare and served with bone marrow, very tender and cooked exactly how he likes it. We hadn’t planned on having a dessert but wanted to see this meal all of the way through to the end, so we decided on the chocolate option and a cheese plate.

The chocolate dessert was silky and was served with a refreshing sorbet. We are big cheese lovers and often choose it over a dessert. As good as the cheese was, we particularly liked the homemade crackers that were different flavours. I think one of them may have been treacle but by this stage my taste buds were exploding  with every mouthful and I couldn’t identify all of the flavours. To finish this superb dinner we were finally given a pretty stone filled bowl topped with tasty treats; which included pink macaroons, chocolate lollipops and homemade fudge.

From talking to various people in the weeks leading up to our visit to Restaurant 23 and Morgan’s Bar we were repeatedly told that this was ‘the best restaurant in Leamington’. I haven’t personally eaten in all of Leamington’s restaurants but this sure would be a tough one to beat!